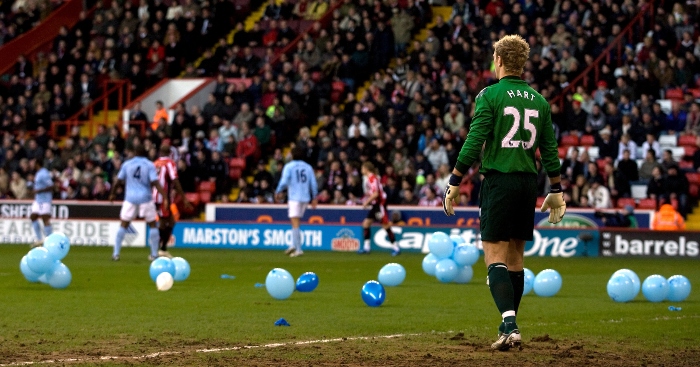 Manchester City fans have a long-standing relationship with inflatables.

The club has been associated with waving blow-up bananas at Maine Road since the 1980s, adding to the impression in neutral circles that City fans were slightly unhinged. In fairness, you’d have had to be supporting them during their 90s banter era.

Yet balloons have become black-listed among the blue-inclined Mancunians since a comical incident during an FA Cup match at Sheffield United in 2008.

In the first half of their fourth-round tie, Sheffield United’s opener was aided by the presence of half a dozen balloons that had drifted into the penalty area. To add insult to injury, the accusing articles had been released by City supporters.

The sight of Joe Hart, before he became a self-appointed Mr Motivator, furiously stamping on the physical representations of City’s premature joy was a sight that shall live long in the memory.

Before we continue, context is needed. After years of underachievement, City started the 2007-08 season in red-hot form. Backed by money from new owner Thaksin Shinawatra, manager Sven-Goran Eriksson had assembled a group of talented, albeit enigmatic, individuals in east Manchester.

The likes of Elano, Martin Petrov, Vedran Corluka and Geovanni provided some foreign glamour to a decidedly meat-and-potatoes squad. To the delight of their raucous fanbase, Manchester United were beaten in August and by Christmas, City were right in the mix for a Champions League slot.

However, an FA Cup run seemed a more likely run to success. Fellow big-spenders West Ham were dispatched after a third-round replay to set up a tie at Championship side Sheffield United.

With only six other top-flight clubs remaining in the cup by kick-off, City fans were decidedly giddy with expectation; 7,000 of them travelled across the Pennines to Bramall Lane.

Their opponents were in disarray. After a controversial relegation the year before, the Blades were floundering in Championship obscurity. Bryan Robson, having only succeeded Neil Warnock in the dugout eight months earlier, was under severe pressure by the City game and was coming off the back of a 2-0 defeat to fierce rivals Sheffield Wednesday.

Robson’s prioritising of the Championship was reflected by a rotated starting XI. Perhaps due to their underwhelming league form, Bramall Lane was under two thirds full for the visit of City. Those Blades fans who attended were treated to a stirring performance from their team.

Stead, left completely unmarked in the area by the City defence, should have netted an early opener but saw his effort saved well by Hart.

The Championship side didn’t have to wait long to break the deadlock. Stead, having a storming game, released winger Lee Martin down the left flank with a beautifully judged ball.

In one of the day’s many ironies, Martin was on loan from Manchester United. As if wanting to prove himself to his parent club, the winger rolled a cross deep into the City six-yard box.

Sounds harmless enough? Under normal circumstances perhaps, but the presence of half a dozen blue and white balloons in the penalty area complicated matters.

Hart had spent the previous 10 minutes stamping on the offending items whenever he had the chance. Unfortunately, one City fan, enticed by the prospect of his side ending their 32-year trophy drought, had released scores of balloons from behind Hart’s goal.

The goalkeeper never stood a chance of clearing them all.

Sadly, those symbols of City’s excitement proved their downfall. Martin’s cross found its way perfectly into the clutch of balloons littering the area.

One balloon was whacked out of place like an errant bowling pin, but another was mistaken for the match ball by City defender Michael Ball who executed a textbook miskick.

Situated just behind him, Blades striker Luton Shelton could hardly miss. His career with the club was short-lived, and the Jamaican striker only scored once more after this game, but the FA Cup makes heroes out of such players and Shelton rammed the ball past a bewildered Hart. 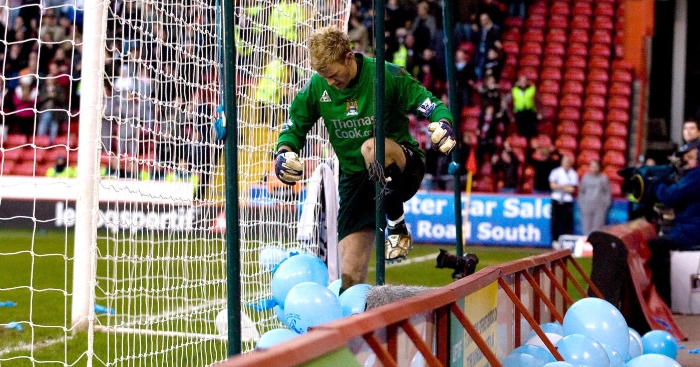 The goalkeeper, by now livid, spent the following five minutes furiously stamping out the remaining balloons, but the damage had been done.

Both teams finished the season feeling disappointed. Robson was sacked soon after this scalp, but Sheffield United failed to make the Championship play-offs under Kevin Blackwell.

Meanwhile, City slipped down to ninth by season’s end, finishing with an 8-1 thrashing at Middlesbrough on an afternoon in which club captain Richard Dunne told Eriksson the squad did not want to play. Eriksson, unsurprisingly, was sacked after a single season, albeit not until being made to take charge of the club on a post-season tour of Thailand.

Still, at least it wasn’t as embarrassing as watching his team get floored by half a dozen balloons.

A celebration of Geovanni, Ronaldinho’s contemporary who lit up the Prem