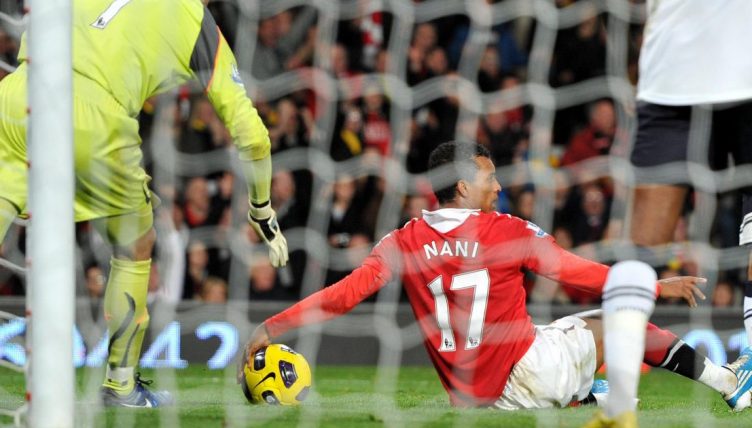 Luis Nani only ever seemed to score completely spectacular goals for Manchester United – but there was one extraordinary exception.

Nani joined United from Sporting Lisbon in 2007 for a reported £17million and was immediately, of course, billed as the next Cristiano Ronaldo.

The winger was never going to live up to those lofty heights, but he still produced mesmerising skills and thumping long-range screamers during his seven years at the club. He was often called frustrating, but he was also a lot of fun. We liked him.

Indeed, he soon became renowned as a scorer of great goals rather than a great goalscorer and we don’t think that’s necessarily a bad thing. The notorious somersault celebrations were pretty special, too.

Tottenham were unfortunate enough to experience this first-hand during Nani’s fifth appearance for the Red Devils in August 2007.

With the scores level at 0-0, he picked up the ball 30 yards from goal before unleashing a swerving shot that flew past a helpless Paul Robinson. Thwack.

#TBT to one of my first goals for Man Utd. Rate it from 0⃣-🔟 👈🏽#throwbackthursday #manutd #goal #epl #rocket pic.twitter.com/hitXwY0kBv

Nani scored another memorable goal against the same opponents three years later, but it stands out for entirely different reasons.

United were already 1-0 up when Nani raced into the Tottenham penalty area and went down under pressure from Younes Kaboul.

His appeal for a penalty was immediately waved away by the referee, but that was the least of the controversy.

Nani was seen handling the ball while lying on the turf and Heurelho Gomes ignored the golden rule about playing to the whistle, throwing the ball to the floor in expectation of a free-kick.

The only problem was, the referee hadn’t seen it. Which gave Nani an opportunity for some wonderfully unsporting behaviour more benefitting of a bastard centre-forward.

After sneaking up behind the unassuming goalkeeper with an impromptu game of peek-a-boo, Nani did at least give Gomes a few seconds to work out what was going on. Was this Nani just waiting to make sure the ball was still live or was he wrestling with his conscience?

If the latter, he quickly ignored it and embraced his inner sh*thouse to knock the ball past Gomes and into the net. What would the boss have wanted him to do? Kick it in the bloody net, obviously.

The goal set up furious scenes of protest by the irate Spurs players while Nani wheeled away in celebration like a mischievous child who had gotten away with his bad behaviour.

“What a farcical way to finish a game,” Spurs manager Harry Redknapp said at full-time. “It’s a handball, he’s deliberately handled it and it should have been a booking. Everyone has seen him do it so we think it’s a free-kick, it’s just the referee that doesn’t see it.

“Everyone saw him do it so it’s a free-kick. You can’t lie on the floor and pull the ball back just because you’ve got the hump because you didn’t get a penalty. It was a scandalous decision and the referee has made a mess of it all.”

Despite Redknapp’s protests, the goal was somehow allowed to stand. Whether it was morally right is a different question entirely.