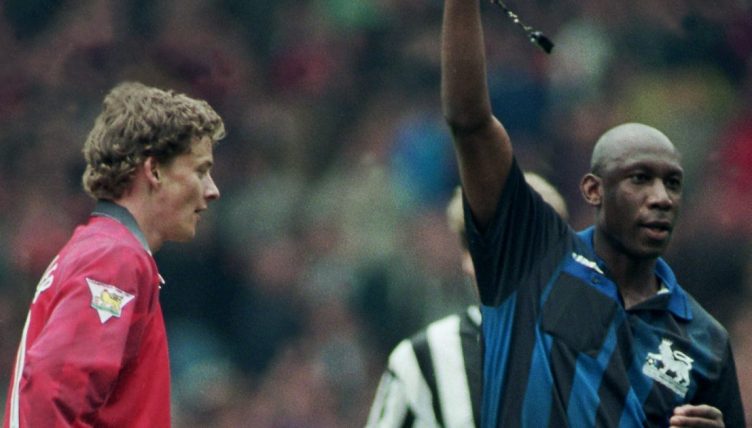 Ole Gunnar Solskjær scored plenty of important goals during his Manchester United career, but let’s not forget one huge contribution he made at the other end of the field.

It was the tail end of the 1997-98 season, and Manchester United were fighting to stay within touching distance of Arsenal after Marc Overmars’ winner at Old Trafford had put the Gunners in the driving seat for the Premier League title.

United were a point clear when Newcastle came to Old Trafford, but Arsenal had two games in hand. Lose to Kenny Dalglish’s team and they could kiss the title goodbye.

It was a difficult afternoon for the reigning champions. Andreas Andersson gave Newcastle an early lead, while Peter Schmeichel was forced off injured in the first half.

However, they drew level through David Beckham and were still chasing victory when the England midfielder launched the ball into the box late on, only for Newcastle to break after Temuri Ketsbaia set Rob Lee free.

Lee had acres of space in front of him, and only Solskjaer in pursuit. The Norwegian wasn’t known for his defensive contributions, but he knew what he needed to do.

The moment Lee gets the ball out of his feet, it ceases to be of any concern for the Manchester United player.

Solskjaer knows he can’t get to the ball before the midfielder, and he knows goalkeeper Raimond van der Gouw is unlikely to have much luck either. Lee has found the perfect path, and he won’t be stopped by any legal means.

The baby-faced assassin could rely on his opponent to mess up the opportunity, or he could fall back on the one method which ensures matters remain in his own hands.

As referee Uriah Rennie walks over, Solskjaer knows what’s coming, and he knows he simply needs to wait for the formality of the red card before leaving the field.

There’s an old saying that if you and a friend are being chased by a bear, you don’t need to outrun the bear – you simply need to be able to outrun your friend.

The same principle applies here – Solskjaer doesn’t need to get close enough to Lee to dispossess him legally; he merely needs to get near enough to stop him continuing his forward movement, however that may be.

When you consider this context, the ‘tackle’ is perfectly executed. His focus is laser-sharp, ensuring he makes contact with his desired target of Lee’s heels. The ball ceased to be part of the equation several frames earlier.

There must be something so satisfying about the moment he makes contact with Lee, sending him sprawling to the turf right at the very moment he’ll have been setting himself to pick his spot and beat Van der Gouw.

It’s the fulfilment of pure evil, which may be more rewarding than the completion of a nobler objective. After all, we’re used to countless movies and TV shows where the bad guys never prosper, regardless of the smarts and planning that go into their schemes. Indeed, they’ll often put in far more effort than the nominal ‘good guys’, and for what?

Solskjaer’s foul, just like Luis Suarez’s handball at the 2010 World Cup or Mathias Jorgensen’s foul on Ante Rebic in the 2018 edition, shows us that just because something isn’t what you’re expected to do doesn’t mean you can’t derive pleasure from it when it goes to plan.

Ferguson wasn’t happy with his player, though, however much we’ve grown to feel the former United manager was at worst okay with the dark arts.

“He laid down the law with me and said: ‘At Manchester United we never win that way; we win by fair play.'” Solskjær would later tell FourFourTwo.

“It was an eye-opener for me. Some managers would have said ‘Well done, son’, but he would not accept that way of winning, which says everything about him.”

Regardless of the manager’s response, plenty of United fans only gained respect for Solskjaer following the contribution against Newcastle.

We reckon Fergie might have changed his mind too if United had managed to claw back Arsenal’s lead at the top.