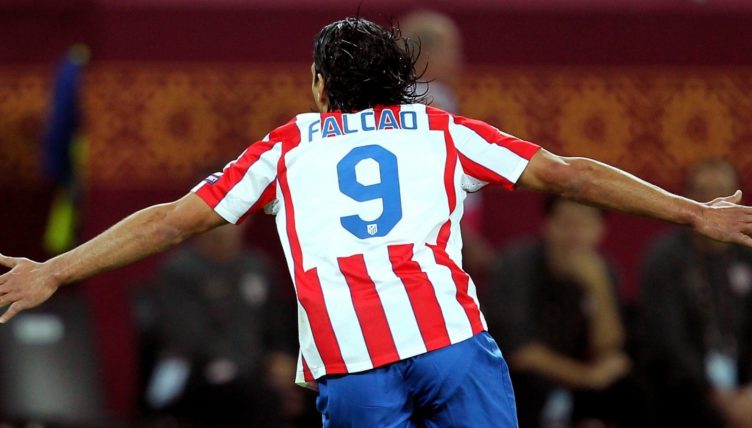 The Colombian might have struggled at Old Trafford, but you don’t forget performances like his against the Blues at Stade Louis II.

Chelsea were the reigning European champions when they took on Atletico Madrid in Monaco, but they were ripped to shreds by a man who at the time seemed unstoppable.

Falcao scored nine goals in those games, to add to the three he scored in the group stage and the so-many-it-should-be-illegal 18 (eighteen!) he netted for Porto in the previous season’s competition.

He was hardly going to take it easy for the Chelsea game, as we saw when he opened the scoring just five minutes into the game.

As Petr Cech advanced, the Colombian dinked his shot with such confidence, such certainty, that the ball decided to wink in his direction and tell him “it’s okay, I’ll do the rest”.

On another day, David Luiz might have made enough contact on the cover to keep the ball out. Here, though, Falcao found the one spot where that wasn’t going to be on the cards.

Looking back, we can view this game as a microcosm of Falcao’s career: an urgency to score as many goals as quickly as possible due to an understanding that time is fleeting.

In much the same way that he crammed goal after goal into his time at Porto and Atleti (142 in four seasons!) before injury at Monaco and struggles in England held him back, he felt no need to space out his goals when he could just bang them in at any given opportunity.

Yet, despite this apparent urgency, his second goal followed something rarer in a striker: a willingness to stop dead before putting away a chance.

Players rightly realise speed of thought and speed of movement are allies, forcing them to learn how to put away chances without thinking, but recognising those occasions where you do have time to slow down and make your task easier is just as valuable.

Having waited for the back-tracking Ashley Cole to give him space for a shot, the curler into the top corner of Cech’s net is sumptuous, even more so when you realise that both this and the opener were scored with his weaker foot.

When you’re in a rush like Falcao was, there’s no time to wait and move the ball onto your stronger foot, as evidenced by the way he slides home the third.

After all, when you’re using the right-hand side of your body to conjure the energy to mentally bully the opposing defence, you need to rely on the other side for the physical part.

Well, we talk about weak and strong, but it’s never been quite as clear cut with the Colombian: he takes penalties right-footed and scored a hat-trick using his right foot twice in a league game four days before the Super Cup, but both of his goals in the Europa final came with his left

Writing in The Guardian after the game, Dominic Fifield described the “ruthless beauty” with which Falcao dispatched Chelsea, adding “even Chelsea’s players might have considered a spontaneous round of applause” after the second goal.

The Atleti striker would keep up his unstoppable form over the course of the 2012-13 season; the hat-trick in the Super Cup helped him to 13 goals in his first nine games, and he would end the campaign with 32 in all competitions despite barely featuring in Europe – a move presumably made purely to give someone else a chance.

When we look back at Falcao’s injury woes at the start of his Monaco spell, and the struggles in England which followed, it’s easy to forget how unstoppable he was in the years prior.

Even when he enjoyed a renaissance in Ligue 1 and the Champions League, many still viewed him as the Premier League flop discovering some unforeseen brilliance rather than the world-class striker rediscovering what made him great to begin with.

Falcao’s numbers in his thirties have been occasionally explained away by references to the presence of an exciting supporting cast including the likes of Kylian Mbappe and Thomas Lemar, but it’s impossible to look at him at his devastating peak in Spain and Portugal and attempt to play down his brilliance.

If only injury hadn’t intervened when he was at his most dangerous.