Where are they now? The Greece XI that shocked Europe to win Euro 2004 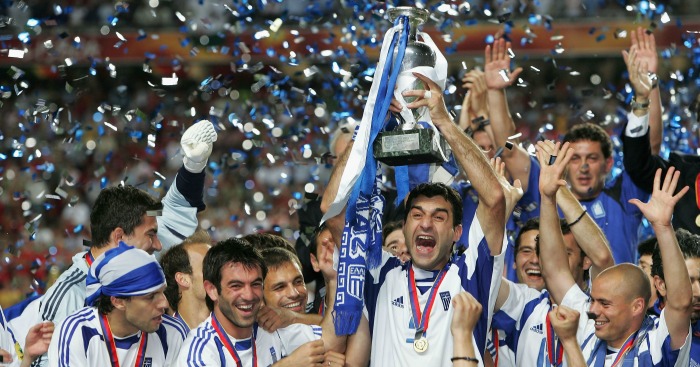 On July 4, 2004, Greece completed one of football’s greatest upsets when they beat Portugal to win the European Championship.

Greece were rank outsiders going into the tournament, priced at 150/1 with bookmakers, but remarkably they got to the final. They were huge underdogs against Portugal, who hosted the tournament, but Otto Rehhage’s side once again upset the odds to triumph 1-0 in the Estadio de Luz.

A look back at their starting XI that day and what they went on to do after the tournament sums up just what an incredible achievement it was.

At 33, Nikopolidis was hardly the veteran his hair colour suggested when he was named goalkeeper of the tournament in Portugal.

Immediately after the tournament, he swapped Panathinaikos for Olympiacos, where he stayed until he retired aged 40.

After hanging up his gloves, Nikopolidis became assistant manager at Olympiacos and is now coach of Greece Under-21s.

Speculation surrounded the Panathinaikos right-back’s future throughout the tournament in Portugal, with Real Madrid reportedly interested, but Porto won the race.

After a year in Portugal, Seitaridis spent two seasons at Dynamo Moscow and three more at Atletico Madrid before returning to Panathinaikos. He retired in 2013 and now owns a restaurant.

Dellas, who during Euro 2004 became the only player to score a silver goal in international football, went into management after retiring aged 36 after a playing career that took in spells at Aris, Sheffield United, AEK Athens, Perugia, Roma, AEK Athens again, Anorthosis and, you guessed it, AEK Athens once more.

Unsurprisingly, Dellas went on to manage AEK Athens for two and a half years before bossing Atromitos for a season until resigning in September 2016. He then became manager of Panetolikos in January 2018 but resigned at the end of last season. 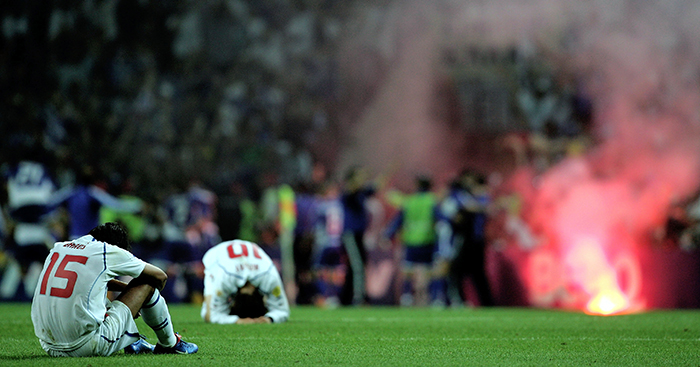 READ: Remembering the short-lived Silver Goal & the 2004 Czech side it robbed

After Euro 2004, then-AEK Athens centre-back Kapsis played at Bordeaux, Olympiacos, APOEL, Levadiakos and Ethnikos Piraeus, where he retired in 2012.

According to the Greek Reporter, he began working as a fireman after his retirement.

The left-back was right at home when Greece won Euro 2004 at the ground of his club side, Benfica. From there, he went to Hearts, where he is fondly remembered, before returning to Greece with Panathinaikos.

After retiring in 2004, he became technical director of the Greece national team before taking a similar role with Panathinaikos in 2014. Away from football he recently started his career in politics and was nominated as a candidate for Greece’s New Democracy Party.

Greece’s triumphant captain and Player of the Tournament went on to reach 120 caps before retiring at PAOK in 2007.

Upon hanging up his boots, the former Leicester midfielder became PAOK president until stepping down in 2012. He then moved into politics and has been an MEP since 2014. 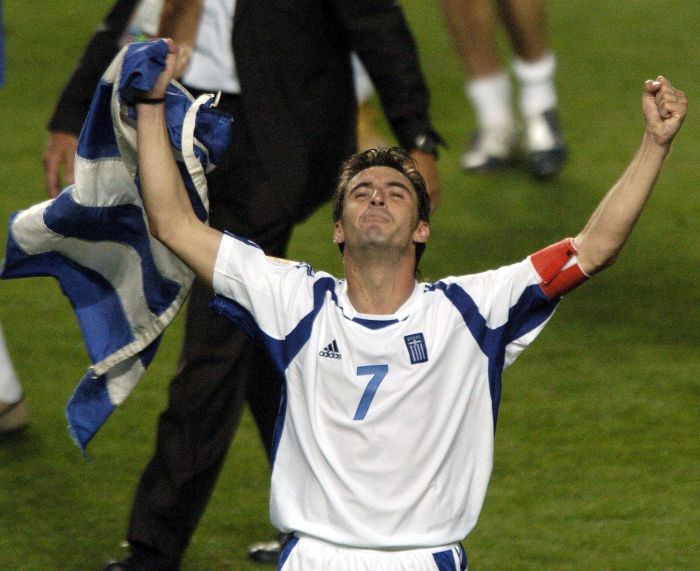 Basinas, who assisted Greece’s winner in the final, played at Panathinaikos, Mallorca, AEK Athens, Portsmouth and AC Arles-Avignon during a 15-year playing career in which he earned 100 caps.

The former holding midfielder stepped away from the game after retiring in 2011. What he has been up to since then is anyone’s guess…

At club level, the midfielder left AEK for Benfica in 2006, spending three years back at the Estadio de Luz prior to returning to Greece in 2009 with Panathinaikos.

After a spell with PAOK, he played in India and Australia before retiring in 2015, since which he has been appointed as technical director of Panachaiki and, remarkably, a UN ambassador – although he resigned from the latter after a year.

The midfielder was one of Greece’s best-known Euro 2004 winners given he was playing for Bolton when he became a European champion.

After retiring he became president of Greek Professional Footballers’ Association, was linked with a Bolton takeover, has managed Paniliakos and Kifisia and is now Greece’s assistant manager.

The then-Werder Bremen striker headed in Greece’s winner in the final before moving on for spells at Ajax, Feyenoord, FC Nürnberg, Bayer Leverkusen, Arles-Avignon, Schalke and Panetolikos prior to eventually retiring after a stint in Saudi Arabia with Al Nassr.

He eventually hung up his boots nine years after pledging to his Bremen team-mates before Euro 2004 that he would pack the game in should Greece reach the final.

The national hero then had a brief spell as technical director of Aris before opening a cafe in Amsterdam last year.

The striker returned to Greece from Fiorentina in 2006, ending his career at PAOK.

Vryzas become technical director and then PAOK president and briefly served as Fernando Santos’s assistant with the national team.

He spent a year as technical director at Greek club Veria before working for the Greek football federation between 2016 and 2018.