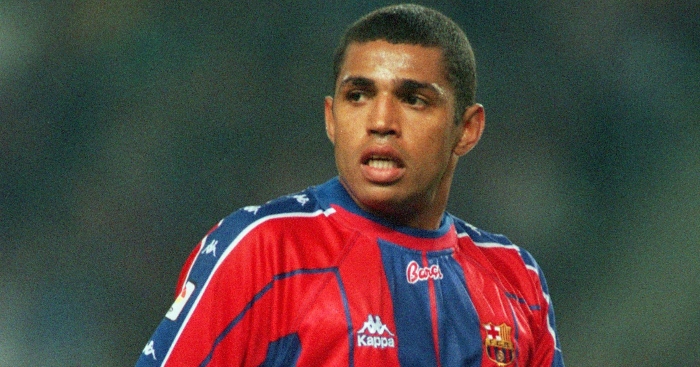 Football’s changed a lot over the last 25 years, and so too have the transfer market and management simulation games.

On the newly-released Football Manager 2020, the likes of Kevin De Bruyne, Neymar and Eden Hazard are valued at close to €100million, but things were a bit different in Championship Manager 97-98.

Indeed, the most expensive player on that game was valued at £16million – and he was playing for Real Betis. Here’s how he and the rest of the top 16 most valuable players fared in real life, starting with some more familiar names.

Having just moved to Barcelona, Rivaldo was at his absolute prime at this point. He’d win two La Liga titles and the Ballon d’Or in his first couple of seasons at the club and helped fill the void left by his compatriot Ronaldo.

He also lifted the World Cup in 2000 before his career started to slow down post-Barça with stints at Milan, Olympiakos, AEK Athens and Uzbeki side Bunyodkor.

Prolific at Villa, Yorke got a real-life big-money move to Manchester United in 1998. Within a year he’d struck up a famously successful strike partnership with Andy Cole, and won the treble in his first season. Not bad.

By the time of this game and his one-season spell with Atletico Madrid, the Italian striker had already represented six clubs by the age of 24. His nomadic career would continue with eight more after leaving the Spanish capital, but he did manage to settle for six years at Inter, scoring over 100 Serie A goals for the club between 1999 and 2005.

But he missed Italy’s World Cup win in 2006 after suffering a knee meniscus problem and never represented his national team again after 2005.

When this game was released, the Brazilian was the holder of the Ballon d’Or. He’d long since moved to Europe, absolutely tearing up the Eredivisie with PSV before one incredible season for Bobby Robson’s Barcelona, scoring 47 goals in 49 games in 1996-97.

He was yet to play the World Cups that many would come to define him by, unstoppable at France 98 before the mysteriously illness-afflicted final, before going on to lift it at South Korea and Japan, earning him a second Ballon d’Or.

Some magic would follow during injury-plagued years at Inter and the Galacticos of Real Madrid, but he was arguably at his very peak in 1997. A force of nature.

Definitely Ronaldo. Spent ages trying to get him! pic.twitter.com/0IhDIkgJwk

Radomir Antić’s Atletico had just signed the loveable Brazilian from Middlesbrough, but he would soon move back, originally on loan in 1999 and then again permanently in 2002. Can’t beat Teesside, can you?

Prising Dennis Bergkamp from Highbury would have proved expensive business, as the Dutchman was establishing himself as one of the best players in Arsenal’s modern history.

He’d go on spend nine more years with the Gunners, winning the first of his three Premier League titles in 1998.

Francisco Miguel Narváez Machón, aka Kiko, was part of that Atletico Madrid side alongside Christian Vieri and Juninho.

At this point he was very much an Atleti hero, having played a big role in their historic double of 1995-96. But he retired at the age of just 30 in 2002 after a short spell with Extremadura.

It would have taken a lot to take El Ferrari away from his boyhood club, Real Madrid.

In 1997 he’d just turned 20 and was establishing himself as one of the most exciting talents in world football. He’d go on to spend 16 seasons with Los Blancos, scoring 323 goals, winning six La Liga titles and three Champions Leagues before a late-career move to Schalke in 2010.

In the actual real world, no transfer valuation would ever be met for Giggs, a one-club man. He retired after 23 years and 963 appearances in all competitions for Manchester United, in which he won the odd trophy or two.

Unthinkably, the striker nicknamed ‘God’ by Liverpool fans would eventually leave Merseyside in 2001, making the switch as David O’Leary’s Leeds United were making waves in Europe.

The Whites paid £12million for him, a fee they haven’t topped since, but it wasn’t a great success. After 18 months with Leeds, Fowler moved to Manchester City, for two and a half years, before eventually rejoining the Reds in 2006.

The first of three Real Betis players in the top six, Fernando Sánchez Cipitria didn’t have the glamorous career that his Champ Man pricetag might have suggested, but there was some glory.

After leaving Betis in 1999, he played a part in Super Depor‘s miraculous title win at the turn of the century before winding down his career with some low-key loans away.

This was the first of two seasons that the Brazilian, nicknamed The Gunman for his trademark celebration, spent at the Camp Nou.

He won La Liga in both seasons he was there, as well as the Copa del Rey, before moving on to Lyon for a £17million fee in 1999. He’d add two more league titles to his honours list in France.

Betis were very much protecting their asset in Oliverio Jesús Álvarez, aka Oli, but they need not have slapped such a hefty pricetag on him. The Spanish striker had a fairly modest career, earning two caps for his country, scoring once, with his best success at club level coming at two stints with Real Oviedo.

Once Alan Shearer had turned down Manchester United for a world-record move back to Tyneside, he was never going to leave again, was he?

Today’s #90sLegendDay is the one and only Alan Shearer. Here he is on CM2 96/97 after his world record £15m move to Newcastle @90sfootball pic.twitter.com/uyBpDBb01v

The forward was a cult hero for River Plate and his home country of Argentina, but he never quite scaled the same heights in Europe.

At this point, he’d just made the journey across the Atlantic, linking up with his compatriot Jorge Valdano at Valencia, before Claudio Ranieri succeeded him in September 1997.

He was sold to Sampdoria for just £2million in 1998, and subsequent years were blighted by suspensions and contract disputes,

Another of Betis’ highly coveted players, the Spain international did get a big move.

Controversially as a Real Madrid academy graduate, he joined Barcelona from Betis in 2000 for £14million. But the club wasn’t in a great place at that point, finishing fourth in back-to-back seasons, with Alfonso scoring just two league goals in two years.