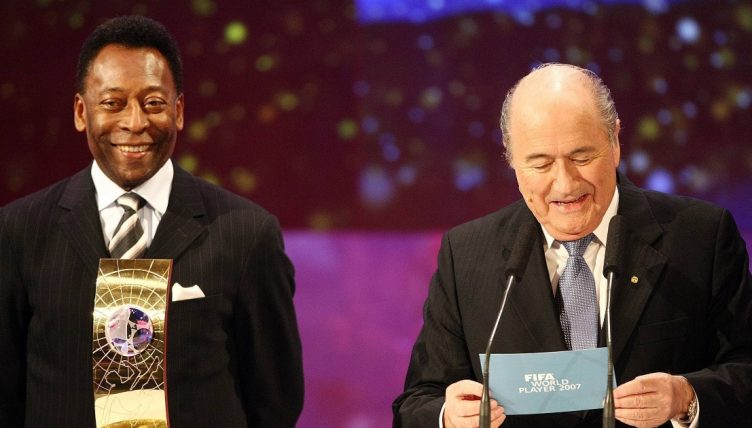 In March 2004, Pele faced the difficult task of naming the 100 greatest living footballers.

It’s hard enough comparing players from different positions, never mind different eras. So Pele deserves some of our sympathy for the arduous challenge.

As such, the great Brazilian – who has tried his hand at a remarkable range of roles since retiring as a player – bottled it.

Despite being told to name the 100 greatest players – 50 active and 50 retired – to commemorate FIFA’s 100th anniversary, Pele decided it was impossible.

Instead, Pele decided to mark FIFA’s centenary by providing a list of 125 players, 50 of which were still playing.

He got his excuses in early, saying: “It was very difficult choosing – sometimes you have pain in your heart when you have to leave somebody out.

“Everyone has their own favourite 100 players and I just tried to make as few mistakes as possible.”

Jay Jay Okocha says being named by Pele as one of the FIFA 100 gave him the courage & drive to do what he did. #TopSport @seancardo pic.twitter.com/SOgid8uFuZ

As is the case with many of Pele’s escapades – from claiming he scored over 1,000 goals, to allegations his sports company stole charity money, to naming Nicky Butt as one of the best players at the 2002 World Cup – it became mired in controversy.

The world awaited with bated breath to discover his selections at a ceremony in London, and it did not take long before his choices were criticised and national newspaper columns were written. Hindsight doesn’t exactly help poor Pele.

To this day, El Hadji Diouf‘s inclusion in the list remains one of the highlights of the former Liverpool flop’s career.

To cut Pele some slack, Diouf was one of the stars of the Senegal team which stunned France on the way to the quarter-finals of the 2002 World Cup, but the forward was coming off the back of a season in which he became the only No.9 in the Reds’ history to go a whole campaign without scoring a goal.

Likewise, you can be excused for not recognising the name of former South Korea international Hong Myung-bo, who, bar one season at LA Galaxy, spent the entirety of his club career in Asia. A grumpy Christopher Davies, writing for The Telegraph on the day after the list was released, bemoaned that the defender’s inclusion “smacks of political correctness rather than sound football judgment”.

Two further selections provide a cautionary tale of the perils of hype and expectation.

Javier Saviola was among many Argentine attackers dubbed The New Maradona prior to Lionel Messi’s ascent to GOAT status (or is Cristiano Ronaldo the GOAT? Actually let’s not…), but the forward never quite fulfilled his potential, despite becoming one of the few players to appear for both Barcelona and Real Madrid.

Emre Belozoglu, meanwhile, never quite generated as high expectation as Saviola, but Pele probably never thought the midfielder would be best remembered for getting kicked in the bollocks by Didier Zokora after racially abusing the former Tottenham man.

Such sceptical selections can be explained by Pele trying to include players from as many different nations as possible, but the former Santos man still received plenty of criticism back in Brazil.

There were suggestions that, in a response to the argument that Diego Maradona won the World Cup single-handedly, he deliberately excluded a number of Brazil heroes to create the impression that he did not have it quite so easy himself.

As a result, the likes of Jarzinho, the only player to have scored in every round of the World Cup, and Gerson missed out.

Gerson was a team-mate of Pele’s as Brazil won the 1970 tournament and appeared on TV to rip up the list, saying: “I respect his opinion, but I don’t agree. Apart from Zidane, Platini, and Fontaine, I’m behind 11 Frenchmen? It’s a joke to hear this.”

Marco van Basten and Uwe Seeler, who were both included, appeared to make their feelings on the project clear by refusing to be photographed for an accompanying book and exhibition.

Five further players – Diego Maradona, Daniel Passarella, Gerd Muller, Ferenc Puskas and Rivelino – were also absent from the book as they could not be contacted by FIFA.

The list continues to occasionally crop up on Reddit thanks to its own Wikipedia page, which even acknowledges the criticism it received. Still, of all the conquests Pele has undertaken, this was one of the more innocent.

It’s at least less confusing than when he became a scout for Fulham.