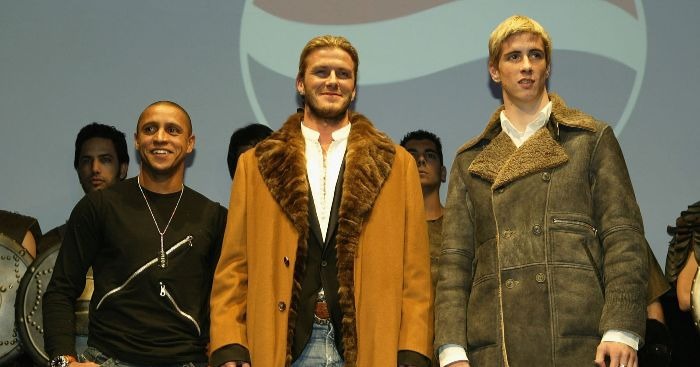 Cola-Cola cast its sticky red shadow over English football for many years, sponsoring the League Cup between 1992 and 1998 and then the Football League between 2004 and 2010. But despite Coke’s best efforts, it was another global soft drink empire that stole our footballing hearts after the turn of the millennium.

With an all-star cast appearing across several expensive productions, Pepsi absolutely nailed its football adverts between 2002 and 2004.

2005 was okay, but that was the year the company introduced its coffee-flavoured Pepsi Max, so we’re drawing a line. Also, would you rather look at magnetic style icon David Beckham or tax-dodging charisma sponge Lionel Messi? Yeah, exactly.

Goldenballs would later take legitimate acting roles in some terrible Guy Ritchie films, but this was the moment that mattered to cinephiles.

The ad takes place at some kind of Pepsi training camp in Japan where the stars are having a kickabout. Out of nowhere comes a group of large Japanese men. Rui Costa, himself on the slimmer side, laughs.

Though there appear to be seven professional footballers and only six sumo wrestlers, the two parties agree to a match.

Before a ball gets kicked, Beckham delivers the classic line: “So, what are we playing for?”

The answer, of course, is Pepsi. Beckham chuckles the kind of chuckle you can’t teach at drama school. “Sure,” he says.

Some football happens, and Rui Costa hits the ball into the sumo goalkeeper’s chest. Save.

Some more football happens. Roberto Carlos gets flattened; Buffon, distracted by a sumo-induced ground tremor, gets beaten by a bicycle kick. And that’s it: game over.

Victorious, the locals claim their cans of Pepsi.

Less victorious is PepsiCo, whose £2million-a-year deal with Beckham is made to look silly when rival brand Coca-Cola uses the superstar midfielder on its promotional World Cup bottles thanks to a pre-existing deal with the English national side.

“This is embarrassing for Pepsi, because it has not secured the highest-profile footballer in the country on an exclusive basis,” says Matthew Patten, chief executive of M&C Saatchi Sponsorship.

It’s 2003. Beckham is still a Manchester United player, which works well for this United vs Real Madrid advert in which the notoriously disrespectful Iker Casillas gets up in Beckham’s face.

Undeterred by the Coke blunder of 2002, Pepsi keeps Beckham front and centre, this time in the context of…the wild west!

The Real Madrid squad occupy a table in the saloon. Suddenly, a pair of Diadora boots become visible visible under the swinging doors. That narrows it down to two, maybe three players… Yep, it’s Gary Neville; thought so. He’s joined by Beckham, Verón, Ryan Giggs and Ole Gunnar Solskjaer.

A white-gloved Casillas then steals Beckham’s drink, prompting a duel.

Out into the street they go, tearing off their cloaks to reveal their respective club kits. Beckham will take a penalty against Casillas.

Rivaldo appears for some reason, then – spoiler – a horse takes the penalty instead, beating the Spanish goalkeeper with ease.

It ends on a cliffhanger, as Roberto Carlos emerges from the barbershop to challenge “Gringo” Beckham.

Around the time of the advert’s release, Pepsi was criticised by the Food Commission for getting sport-loving children hooked on sugary drinks.

This spaghetti western homage is stuffed with authenticity, however, and was shot in Almeira, Spain, the location of classic films like The Good, the Bad and the Ugly and A Fistful of Dollars.

It’s 2004 and Pepsi chiefs have clearly been on the caffeinated soft drinks. While Coca-Cola modestly presents an advert of a woman walking down the street handing out drinks, Pepsi spends millions on adverts inspired by the Roman Empire.

The first of two high-budget clips features Britney Spears, Beyonce and, er, Pink, who manage to overthrow Emperor Enrique Iglesias in an amphitheatre.

The second, seemingly set on the brink of the Middle Ages, gets the football lads involved: Beckham, Roberto Carlos, Ronaldinho, Raúl, Francesco Totti, Fernando Torres and Rafael van der Vaart, as well as some pretty minor extras in the shape of Portuguese goalkeeper Ricardo and forgotten Brazilian playmaker Diego, whose career trajectory closely mirrors that of Pink.

In this short story, a nefarious centurion and his soldiers are ransacking a village for its Pepsi. A child drops a football, which rolls into the path of Beckham in a leather tunic. Everything kicks off.

But while a bunch of players get to show off their skills in this ad, one star steals the show. And no, it’s not Beckham.

It is, in fact, Totti, whose phenomenally lacklustre hand gesturing makes this one of the greatest pieces of television ever and perhaps the highlight of the Italian’s own career.

Hard to see how that was the best take, in all honesty.

It’s probably best to leave the analysis to the experts, so here’s academic Sarah Gee explaining the events of the ad in a 2014 essay on masculinity:

“In Pepsi’s ‘Foot Battle’ advertisement, Beckham evokes his power in several ways. First, by silencing the roaring crowd and raging soldiers, stopping a runaway football and taking control of the situation with authority.

“Second, when the young boy asks for Beckham’s autograph, signifying his influential power. His ability to strategise is evident as he passes the football (the weapon) to his fellow gladiators in order to defeat the soldiers.

“He shows his talented physical skill with his fancy footwork in handling the football. Finally, his endurance is evident as he outlasts his opponents and his Pepsi gladiator team wins the battle.”

This is, of course, the jewel in Pepsi’s crown, a piece of cinema that will live long in the memory, even if it’s not entirely clear when or where it’s supposed to be set.

I’m thirsty all of a sudden.

Pepsi’s football cred essentially died when Coke put its annoying jingle into “Wavin’ Flag” by K’naan, but we’ll always have these sweet, sweet memories of the golden age of Pepsi adverts.