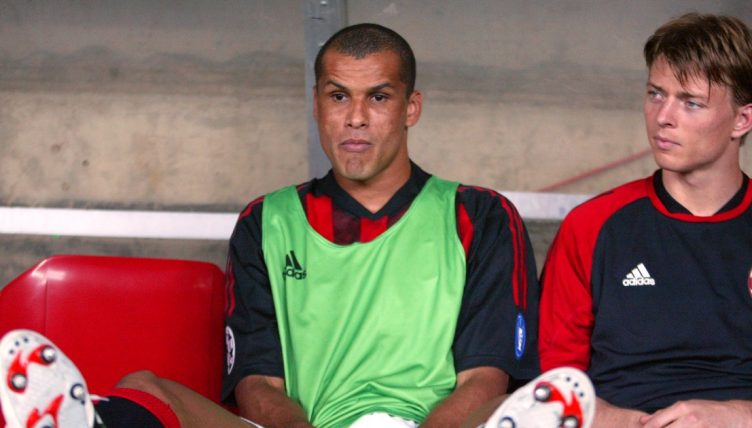 Rivaldo’s arrival at AC Milan in 2002 was supposed to ignite the Rossoneri’s return to the top of European football. And it did. Except not in the way Milan, or Rivaldo for that matter, had planned.

Hailed by Paolo Maldini as “one of the greatest ever to pull on our red and black shirts”, Rivaldo arrived at the San Siro just a month after lifting the World Cup with Brazil in Japan.

It was a tournament that had showcased the good and bad of Rivaldo, who scored five and was named in the team of the tournament but also courted controversy after feigning injury when Turkish defender Hakan Unsal kicked a ball towards him.

Brazil manager Luis Felipe Scolari nevertheless described Rivaldo, rather than Ronaldo, as “the best player in the World Cup.”

An excellent dribbler and all-round goalscorer, Rivaldo had made his name over the previous five years with Barcelona. He was signed on the recommendation of Bobby Robson, who urged the club to pursue a deal for the Brazilian over a move for Steve McManaman.

Rivaldo repaid that faith with 136 goals in 253 games – a tally made all the more impressive by the fact he rarely played as an out-an-out striker – while also winning two La Liga titles, a Copa del Rey and both the Ballon d’Or and FIFA World Player of the Year Award in 1999.

He had endured a strained relationship with manager Louis van Gaal during Barcelona’s trophyless 1999-00 season but appeared to have won the battle of wills when the Dutchman left at the end of the campaign. When Van Gaal was re-appointed in 2002, Barcelona agreed to rescind Rivaldo’s contract.

“I don’t like van Gaal and I am sure that he doesn’t like me either,” Rivaldo told TV Record.

But it was a situation Milan and club president Silvio Berlusconi were more than happy to exploit.

Back in 2000, Berlusconi had watched on from the stands as Rivaldo scored a memorable hat-trick during a breathless 3-3 draw against Milan in the Champions League.

The haul included an ingenious daisy-cutter of a free-kick that was deliberately fired under the jumping Rossoneri wall. Berlusconi spoke in glowing terms about Rivaldo after the game, describing him as an “exceptional player” and someone they had “tried everything” to sign.

Fast-forward nearly two years and Milan were at the front of the queue to land Rivaldo’s services. As many as 20 different clubs from across the continent were linked with a move including Liverpool, Newcastle, Chelsea and Tottenham.

Rivaldo put pen to paper on a three-year contract with AC Milan worth a reported £3million a season. It was a major sum to fork out for a 30-year-old with a history of knee injuries and it made Rivaldo one of the highest-paid players in Serie A.

“There is no one better than Rivaldo,” Berlusconi insisted. “He is a wonderful player and it is an honour for Milan to have a player of his calibre.”

Yet while the club president spoke in glowing terms about Rivaldo’s arrival, manager Carlo Ancelotti struck a decidedly different tone.

In truth, Ancelotti was under pressure going into the 2002-03 season. A year earlier, Berlusconi had bankrolled a major overhaul of the Milan squad with Manuel Rui Costa, Cosmin Contra, Javi Moreno and Filippo Inzaghi all signed at no small expense.

Yet despite the outlay, Milan failed to claim any silverware, with the Rossoneri’s fourth-placed finish arguably all that prevented Ancelotti from losing his job. Despite the underwhelming campaign, he was not yet ready to give up on Rui Costa.

“It would be a mistake to think that Rui Costa will not play because he has already shown what a good player he is for us,” Ancelotti told reporters.

“I am, of course, very happy to have Rivaldo and it is obviously much better to have a player like him than not to have. I don’t see any problems in dealing with him and really the only problem for me will be selecting 11 players and leaving others on the bench.”

Ancelotti didn’t see any problems but Rivaldo soon would, as his debut set the tone for much of what was to follow.

Turning out for AC Milan in the annual Luigi Berlusconi Trophy against Juventus, he received a rapturous welcome from the home support and took to the pitch in a pair of distinctive white boots yet was subbed off after 62 minutes, having failed to make much in the way of an impact.

With Ancelotti preferring to rotate his attacking options, Rivaldo found himself in and out of the Milan team during his first few weeks at the club in an approach that left him struggling for consistency.

There were some initial flashes of the old Rivaldo though. An assist against Lazio on his full debut suggested better things were to come, while his first Serie A goal, a long-range strike against Atalanta, came as part of an all-action performance in which he also laid on an assist.

Two months into the season, Rivaldo had three goals and two assists in five league appearances for the Rossoneri, including a winner against Udinese.

He was beginning to make an impact in the big games too, setting up the only goal of the game for Serginho in the first Milan derby of the season with a sublime slide-rule pass that cut the Inter defence in two.

Often played as a support striker behind Inzaghi, Rivaldo initially benefitted from the absence of Andriy Shevchenko, who was injured at the start of the season.

But the return of the Ukrainian coupled with the emergence of Jon Dahl Tomasson saw Rivaldo’s game time significantly reduced. By Christmas, he was beginning to feel the chill in every sense of the word.

He played just once in Serie A throughout December, while his performances in the Champions League had so far failed to yield a single goal.

Pundits began to speculate that Rivaldo was struggling with the closer marking and limited space in Italian football. His issues may have been away from the pitch, as he separated from his wife during this period and lived away from his children.

Though he eventually got off the mark in Europe with goals against Lokomotiv Moscow and Real Madrid, Rivaldo cut an increasingly peripheral figure.

Part of the problem stemmed from the fact that there simply wasn’t a place for an inconsistent Rivaldo in the starting line-up; his arrival had inspired many of the players who previously underperformed to up their game.

While Inzaghi and Shevchenko proved a dynamic partnership up front, with Tomasson as an Ole Gunnar Solskjaer-style back-up, the likes of Clarence Seedorf, Andrea Pirlo, and, most notably, Rui Costa were proving effective in midfield.

“Ancelotti does not persecute me like Van Gaal did in Barcelona,” Rivaldo said. “He is different. Carlo is a funny person, who talks to you, only he does not make me play. That is the problem and I do not know the reason.”

While he continued to play in fits and starts in Serie A, the goals had all but dried up. After featuring heavily for Milan in the group phase of the Champions League, he found himself restricted to ineffective cameo appearances at the business end of the competition.

Rivaldo played a combined total of 30 minutes across two-legged ties with Ajax and Inter Milan – a situation that reportedly left him furious. In his absence, the Rossoneri reached their first Champions League final in eight long years. Ancelotti would have been foolish to change things.

‘Next year will be Rivaldo’s year’

There was still one last opportunity to impress though. Rivaldo was selected to start the first leg of the Coppa Italia final against Roma in a game played just over a week before the Champions League final.

The forward fared well enough, setting up one goal in a 4-1 win, but still found himself warming the bench for the final at Old Trafford. He cut a forlorn figure, watching on as Milan laboured to victory over Juventus on penalties in a decidedly cagey affair that required the kind of attacking spark he was once famous for.

Had Milan lost, then perhaps more questions would have been asked of Rivaldo’s absence. Instead, less than a year on from lifting the World Cup, the Brazil international watched on as an unused sub, nothing more than a glorified bystander while his team-mates secured the European Cup.

There would be one last hurrah in the second leg of the Coppa Italia final. Played just three days after Milan’s Champions League win, the Rossoneri’s 4-1 first-leg lead was quickly reduced by a Francesco Totti brace.

For the first time since leaving the Camp Nou, Rivaldo stepped up in the way he had countless times for Barcelona, scoring a header to reduce the arrears and then playing in Inzaghi for the equaliser on the night with a brilliant through ball.

There were no celebrations, however, with the unmoved Rivaldo reacting to his goal by smashing the ball back into the empty net again in an act of sheer frustration.

Despite using him sparingly, Ancelotti ended the season convinced that Rivaldo would come good at the San Siro. “Next year will be Rivaldo’s year, I don’t see why it should not be so,” he said. “He is a champion who I see train well every day, he will play next season with the right spirit.” 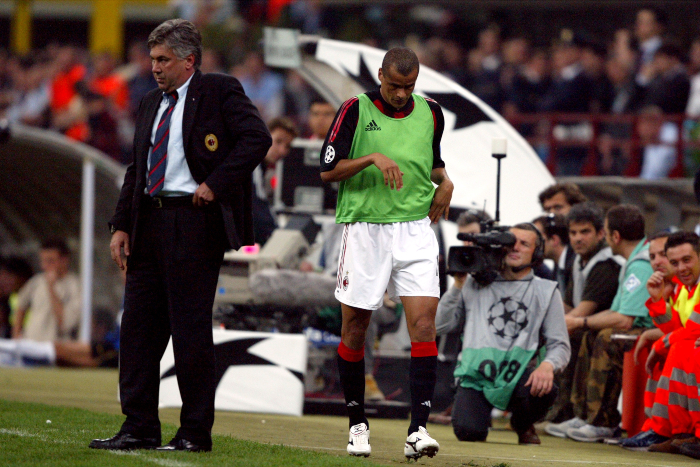 Eager to prove his worth, Rivaldo initially opted to stay at the club and appeared in their European Super Cup victory over Porto.

But the writing was on the wall when he found himself on the bench for an opening day fixture against Ancona, with Ancelotti opting to start new signing Kaka in Rivaldo’s preferred attacking midfield role.

“If you don’t play in games like that, I thought, then you will never play in the big matches,” he said.

For the second time in the space of less than two years, Rivaldo’s contract was cancelled by mutual consent.

He moved on to Cruzeiro but not before one final humiliation, winning the Bidone d’Oro award for the worst Serie A player of 2003, beating Colonel Gaddafi’s footballer son Al-Saadi.

AC Milan won the Scudetto that season and Rivaldo eventually returned to Europe, initially toying with the idea of joining Bolton in 2004 before opting for sunnier climates with Olympiakos in Greece.

It was the right move, as he enjoyed an Indian summer of three Super League titles and two Greek Cups. He went on to play for six more clubs in a nomadic final few years, eventually retiring in 2014 aged 41.

Undoubtedly one of the greatest ever players to pull on the red and black of Milan, the only real shame is that Rivaldo never once showed his true greatness for the Rossoneri.