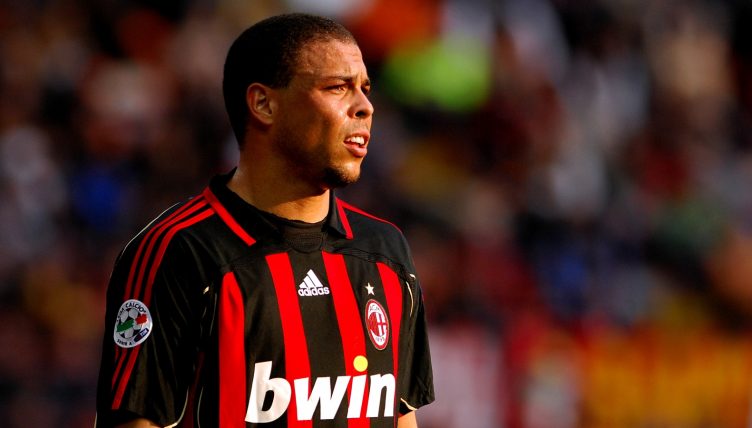 Between 2002 and 2008, AC Milan signed Brazil superstars Rivaldo, Ronaldo and Ronaldinho. None of them were brilliant, but Milan just kept on trying.

When one thinks about Rivaldo, Ronaldo and Ronaldinho as a trio, one tends to think of the 2002 World Cup.

It was there that the ‘Three Rs’ formed one of the deadliest attacking units seen in football, scoring 15 goals between them — more than nine percent of the tournament’s total — and earning big-money moves shortly thereafter.

But another common thread between the Brazilians can be found, not in Japan and South Korea, but in Italy.

For it was to Italy, to AC Milan, where all three ‘Rs’ eventually headed following successful spells in Spain — Rivaldo and Ronaldinho with Barcelona, Ronaldo with Real Madrid.

Curiously, however, all three players arrived marginally past their prime, and none quite lived up to expectations.

So just why did Milan keep returning for these old Brazilians?

As the three Rs helped Brazil to World Cup glory in 2002, Ronaldo scooped the Golden Boot and young Ronaldinho made a name for himself with several electric performances.

But it was the eldest of the trio, 30-year-old Rivaldo, who most exceeded expectations. Playing in a creative role behind Ronaldo, the skilful Barcelona attacker was at times unplayable, even contributing five goals to Brazil’s cause.

His performances alerted an ambitious AC Milan. Two years earlier, the Italian side had attempted to lure Rivaldo to San Siro after missing out on the signing of Spanish midfielder Javier Farinos to city rivals Inter.

It didn’t happen then, but problems at Barcelona meant that they got their chance again after the World Cup. Rivaldo signed on a free transfer, picking up wages of more than €90,000 a week.

“There wasn’t any alternative for AC Milan because he is a great player,” said Milan vice-president Adriano Galliani. 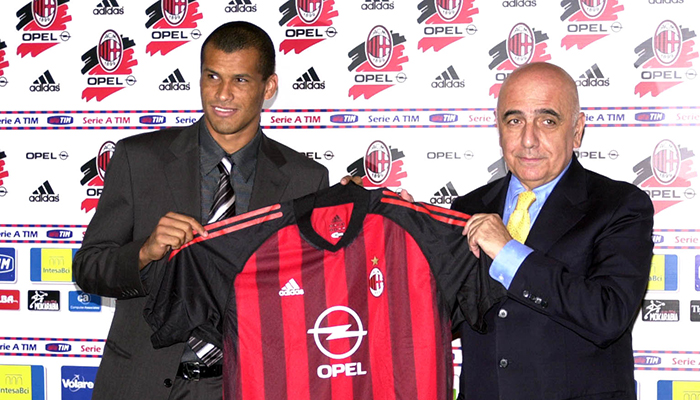 A great player he was, yet Rivaldo could never repeat his World Cup heroics in a Milan shirt.

As the club fought their way to become Champions League winners at the end of the 2002-03 season, Rivaldo was playing a bit-part role, having failed to form an understanding with his attacking team-mates.

In the final victory against fellow Italian side Juventus, the Brazilian sat on the bench as Clarence Seedorf and Rui Costa provided the creativity from midfield.

Despite his disappointing campaign, a visibly frustrated Rivaldo was still able to score in the Coppa Italia final against Roma.

📅 On this day in 2003, #ACMilan won the Coppa Italia at San Siro against Roma thanks to goals from Rivaldo and Inzaghi…

His contract was terminated midway through the 2003-04 season, with the attacker describing his experience in Milan as “humiliating”.

Although Rivaldo continued playing professionally into his 40s, hindsight suggests his powers were on the wane around the time of his Milan switch — those 2002 World Cup performances more a glorious final swan-song than evidence of a player at his peak.

With compatriot Ronaldo, the decline was easier to spot. A drop in games and goals for Real Madrid between 2005 and 2007 clearly suggested that several serious knee injuries were finally taking their toll.

Madrid coach Fabio Capello even publicly criticised the striker for putting on weight.

And yet in January 2007, Milan swooped for their second of the legendary Rs. A transfer of €8million was agreed for the 30-year-old Ronaldo, with Galliani calling it “a very satisfactory agreement for a top-class player”. 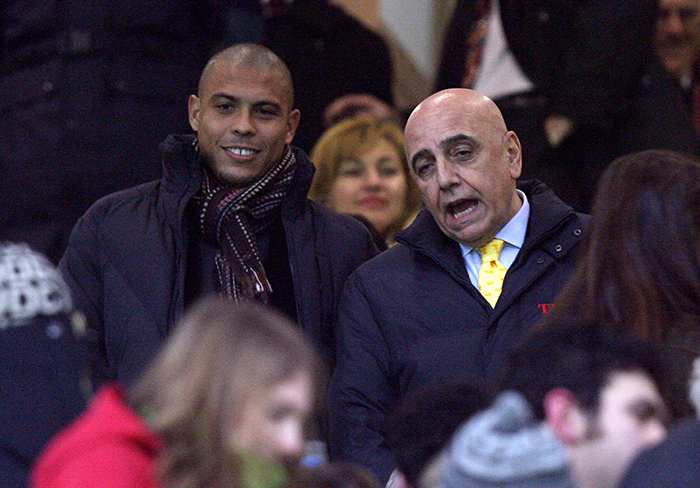 In fairness to Milan, signing these Brazilian Galacticos did, in an indirect way, seem to guarantee a Champions League trophy.

As with Rivaldo in 2002-03, the Ronaldo signing preempted Milan’s 2007 final win over Liverpool — though Ronaldo was cup-tied and played no part in the competition.

Over the course of just over a year, Ronaldo scored a more-than-reasonable nine goals in 20 appearances for Milan, before yet another severe knee injury ended his season in February 2008.

He was released that summer, but without receiving anywhere near the kind of vitriol aimed at Rivaldo.

It didn’t take long for Milan to fill the void. In mid-July, the club signed Barcelona’s Ronaldinho for €22million, much to the chagrin of Manchester City and owner Thaksin Shinawatra, who had tabled an even higher bid. 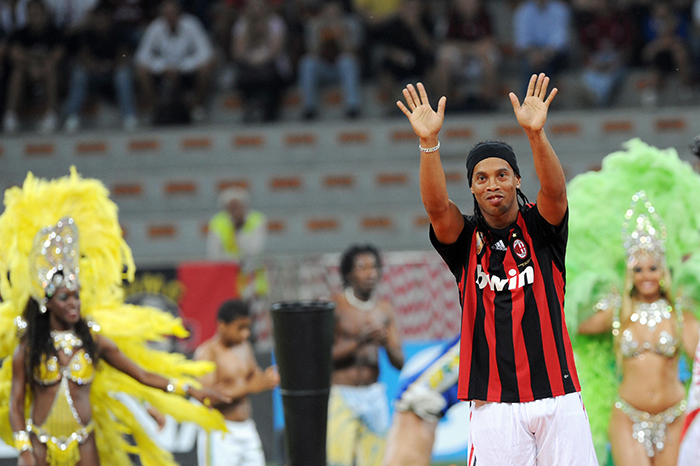 There were parallels between this transfer and the Ronaldo move 18 months prior.

While only 28, Ronaldinho had, like Ronaldo, been plagued by questions over his fitness: in February 2007, Barcelona team-mate Samuel Eto’o criticised the Brazilian for missing “eight of every 50 training sessions” — an accusation that was only slightly exaggerated.

In both of Ronaldinho’s full seasons with Milan, the club finished third in Serie A, never getting far in Europe.

But while the arrival of Zlatan Ibrahimovic, Robinho and Antonio Cassano limited Ronaldinho’s playing time in his third and final season, his first two campaigns saw a brief but brilliant return to form and reaped 20 goals, including a hat-trick against Siena in January 2010.

Yet by January 2011, Milan were willing to let their 30-year-old asset leave for free.

“AC Milan officially announces that it has accepted the request for Ronaldinho, but we have not terminated the contract with the player,” said Galliani.

“We are determined to help him return to play in Brazil, although this causes a great pain to Berlusconi. I will not leave Brazil until the player has chosen his new team.”

A few months after Ronaldinho’s departure, Milan won their first Serie A title in seven years, in part thanks to the goals of the younger and fresher Robinho.

Between 2002 and 2011, AC Milan had one (and never more than one) of the three R’s on their books for a cumulative five and a half seasons.

Rivaldo, by far the most vilified of the trio, was the only one to win silverware — the 2002-03 Champions League, in which he contributed two goals in the group stages, and the Coppa Italia, to which he made a more significant contribution, including a goal in the final against Roma.

During that time, it was left to a much younger Brazilian, the mercurial Kaka, to lead Milan to its 2007 Champions League victory, the club’s last European honour.

Yet Berlusconi, Galliani and the Milan hierarchy never quite learned from the Rivaldo experience.

The warning signs were there over Ronaldo’s fitness, and the subsequent Ronaldinho deal represented an even bigger financial risk, but the club always welcomed their “great” and “world-class” signings with open arms.

To some extent, the club’s Milan Lab and Milanello training facility, famed for their ability to lengthen the careers of players, might have offered some false security.

At the time of Ronaldo’s signing, for example, the evergreen Filippo Inzaghi — still playing a key role in the side — was 33 years old. Captain Paolo Maldini was 38.

At 30, Ronaldo was something of a novice. But with a long and nomadic career across several countries, not even the Italian lab experts could fix those knees.

Beyond the three Rs, Milan even tried the same trick on one of their greatest players of the modern era.

Having departed for Real Madrid four years prior, a 31-year-old Kaka was welcomed back with a two-year contract in 2013.

Of course he suffered a muscle tear on his second debut; of course he left the club after just one year.

Milan might not have gleaned the best value from their Brazilian imports, but their unwavering belief in the longevity of a football career? That has to be saluted.

READ MORE: Ranking all 27 players to have played for AC Milan and Inter since 1995