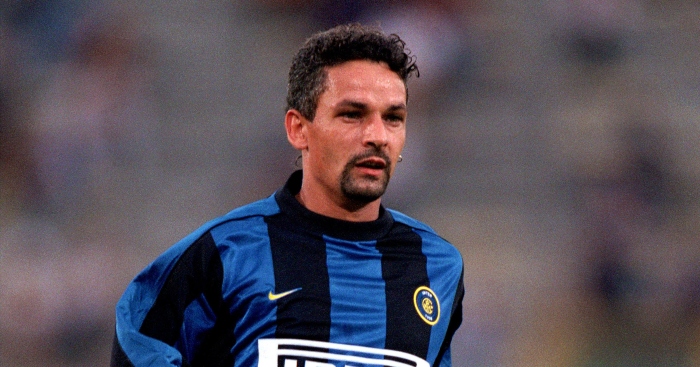 There were many times throughout Roberto Baggio‘s career in which he was pushed to the side, whether that be for his club or country.

Unfortunately for his opposition, it was often when Il Divin Codino was out of the limelight that he would strike hardest and with the most devastating consequences.

Even his two Scudetto victories – with Juventus in 1994-95 and AC Milan the following season – came during campaigns that were laden with frustration for him on an individual level as fitness issues took their toll.

By the time Real Madrid faced Internazionale in their second group match meeting of the 1998-99 season – the Spaniards had come out on top 2-0 in their first bout – Baggio was no longer the standout talent at one of Italy’s biggest clubs.

Before moving to Inter, he had pretty much been pushed out of Juventus and, summing up how he felt as his playing time diminished at AC Milan, he said of his time under Arrigo Sacchi at the San Siro: “I feel like a Ferrari being driven by a traffic warden.”

Inter were enduring a torrid time in Serie A, in which they eventually finished eighth, and had taken seven points from their first four Champions League matches. Despite their meagre league form, they knew that wins against Real and Sturm Graz would be enough to top the group.

Baggio’s career was largely hampered by injuries, and at the age of 32, there were other options that were starting games of the highest magnitude, as was the case here – although it’s hard to argue with the names selected ahead of him against Real Madrid.

Ronaldo, nine years Baggio’s junior, was paired up front with Ivan Zamorano, who had joined from Real in 1996. This left Baggio to sit patiently on the bench until the 68th minute, when he was finally called upon to replace Zamorano.

The score was 1-1 when Baggio came on, after Ronaldo had struck a shot from range that flicked off Zamorano’s foot and past Bodo Illgner. Then, six minutes after the opener, Clarence Seedorf had burst into the Inter box and headed Savio’s cross past Gianluca Pagliuca.

There was a fairly subdued cheer when Baggio replaced the Chilean goalscorer, which was perhaps understandable considering his only Champions League goal that season had been in a qualifier against Latvian side Skonto, a tie which Inter won 7-1 on aggregate.

For 17 minutes, that sorry drought continued, but in the four that followed he took the game by the scruff of the neck and made it his, reminding the world of his talent’s supremacy.

In the 86th minute, with so many bodies around him in the box, Baggio received the ball and had attempted to find a team-mate with a first-time pass, only for it to bounce off a defender and back to him.

As soon as the ball was returned to his feet, Baggio only had one thing on his mind. He took a touch and found the space that Ivan Campo and Fernando Sanz were trying so desperately to close off, striking the ball between the flailing defenders.

For a second it seemed as though Illgner had saved it, but his efforts only added to the goal’s aesthetic, as it pinged up off his leg and into the roof of the net.

Cue complete pandemonium in the San Siro. As fans lost their minds and sent a collective roar cascading through every nook and cranny of the iconic stadium, Baggio’s team-mates all came flying over to bundle on top of him in celebration.

Baggio was actually booked for the celebrations that followed his goal, but as he strolled back to his half with his collar and morale up, it isn’t too likely that he cared in the slightest.

Considering he had just scored the goal that would likely secure a win over Real Madrid and take Inter to the top of the Champions League group, some forwards may have relaxed a bit. Not Baggio.

Soon after, he was sprinting into the penalty box but was not quite quick enough to evade Campo. The Spaniard went through the back of Baggio, sending the forward falling to the floor, but the penalty wasn’t awarded. Even when he was on the ground, Baggio almost managed to poke the ball into the net.

That may not have gone his way, but this was his night and he was to make sure of it. In the 90th minute, he was tearing forward as quickly as he could and was fed the ball at the edge of the box.

Met by Illgner’s 6ft 3in frame, Baggio was not deterred, as he shifted the ball around the goalkeeper before sliding it into the net, away from the two Real defenders who were desperately trying to get back onto the line.

Baggio was clearly extremely smug, and rightly so. As he ran around with his hand cupping his ear, it felt as though he was sending a message to all of those who had written him off at any point in his career. Say what you want, but Roberto Baggio is Roberto Baggio.

He had shut the doubters up so many times throughout his career, and this was another of those incidents in which he did emphatically.

He had wanted to run and celebrate with the fans, but Diego Simeone was so keen to get to him that he ended up pushing the match-winner into the net, where he was mobbed by his team-mates.

Baggio was the man everyone wanted to congratulate when the final whistle was blown as well, having secured Inter the three points that took them top, where they would stay after beating Sturm Graz 2-0 in their last group game.

All of this would eventually be nothing more than a reminder of Baggio’s enduring brilliance, as Inter were beaten 3-1 on aggregate by Manchester United in the quarter-final, with the Red Devils famously winning the trophy by beating Bayern Munich in the final.

It wouldn’t have been known to those who watched on, or to the man himself, but this was to be Baggio’s last ever great night on the biggest of European stages.

In a way, it’s quite fitting that it came off the bench, in a campaign where he was often overshadowed by other names, while he and his club both faced hardship.

As surprising as it is, it would take another 22 years until these two clubs met again in a competitive match. Even if they had played every year in between, it is highly unlikely the fixture will have seen anything quite like this.