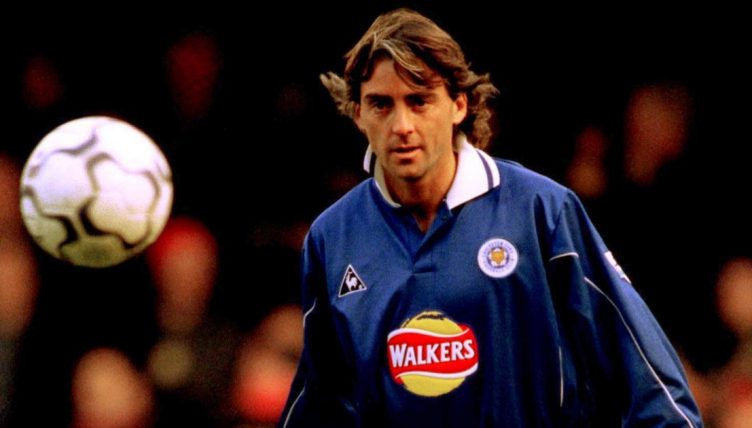 Roberto Mancini only played five games in a Leicester City shirt, but the former Italy international certainly left his mark.

Looking at the Foxes’ signings during the 2000-01 season, there are a few names who you might not remember too fondly. Or, indeed, at all.

Junior Lewis played 25 league games for Leicester. Simon Royce made it to 19. Kevin Ellison managed just one. However, as Mancini proved, minutes on the pitch aren’t the only thing that can help you make an impact.

After playing his part in Lazio’s run to the Serie A title in 1999-2000, his third season in Rome, the Italian forward was sidelined the following year.

Indeed, as we entered 2001, he had gone more than six months without so much as stepping onto the pitch at the Stadio Olimpico, with his player-coach role under Sven-Goran Eriksson turning into a coaching job alone.

Enter Leicester, who went into the new year with three straight defeats – including a 6-1 drubbing at Arsenal – and found themselves in need of refreshment.

“Roberto knows that he is 36 and that I am looking for his football knowledge, not his legs,” admitted manager Peter Taylor in a display of honesty which we don’t often see these days.

“He also understands that his role will be to help bring on the younger players and pass on experience to the strikers.”

Those strikers, summer arrivals Ade Akinbiyi and Trevor Benjamin, took some of the blame for the lack of goals which brought about Leicester’s relegation the following season. If Mancini had stayed longer, perhaps things could have gone differently.

DID YOU KNOW? #BPL winning manager Roberto Mancini made 4 appearances for Leicester City in 2001 #BPLkickoff pic.twitter.com/6rBNVaTtz5

He may have been getting on in years, but Mancini still oozed class, something he showed during the twilight of his career at Lazio.

He was the sort of player who you just knew could score the simple goal if he wanted to, but often felt compelled to remind you he was better than you by doing something more extravagant.

And, most importantly, he was the sort of man who could pull off an oversized shirt without it making him look dishevelled.

Take this finish during his Lazio days. It didn’t need to be this difficult, but it’s all the more special for that reason. And you can even see him dancing away, as if he reworked the entire run to make the whole process smoother and ensure it left him with no hair out of place.

“I did not have a clue at that stage that he would go on to manage in Italy and win the things he has as a manager. But what I did notice was that he knew about training and he showed an interest in the way we trained at Leicester,” Taylor would later recall.

This was not a player looking for a final payday, but rather someone who knew his time in the game was finite and wanted to gain a new experience while he still could. Mancini seemed to know the limits of what he could provide in the other direction but knew he could provide something, and as long as both sides recognised this to begin with it would be enough.

“For a time Mancini looked like a bottle of Frascati which had found itself in the company of brown ales,” The Guardian‘s David Lacey wrote of one of Mancini’s starts, in a surprise victory over Chelsea, pointing out the contrast between the Italian’s style and the less sophisticated approach taken by his team-mates against higher-ranked opponents.

The Premier League he entered was a far cry from the one in which he would later manage, but at the same time it felt different from the Serie A of his 20s.

English football was in a transition period, with relics of the pre-1992 era being pushed aside to make way for a glossier new millennium. Things were changing in Italy too, but not as drastically.

There was more energy on the pitch, but the style we associated with the competition in the early days of Football Italia remained. It was a kind of beauty with acknowledged flaws, designed to incorporate history rather than moving on from it.

In making the switch to England when he did, Mancini could bring over some of that mystique without needing to stick around for the teething problems to show themselves. He could leave a bigger mark in five games, therefore, than he might have done in 50.

Mancini’s departure was so sudden that there was little time to react. He departed days before Leicester’s FA Cup meeting with Bristol City, a game in which he was expected to play, after being offered the Fiorentina manager’s job.

“I can’t praise Roberto enough for what he did while he was with us,” Taylor said, and there seemed to be some recognition that part of his impact came from the way he taught those at the club some lessons they could use to help themselves.

“I was used to watching him on Italian football on TV. To just get changed in the same dressing room as him was an unbelievable feeling and an honour,” Robbie Savage would later say.

The Italian was Mr Bergstrom handing Lisa Simpson his parting note, reminding his peers that everything they learned from him was something they already had hiding within themselves.

We shouldn’t have been surprised when his return to England saw him lead Manchester City to a monumental title. He’d begun working on it more than a decade earlier.

READ NEXT: A tribute to Esteban Cambiasso and his final stand with Leicester City