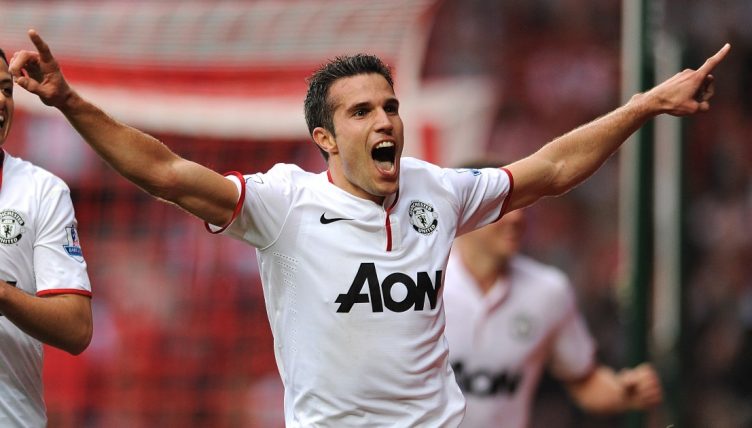 In May 2012, Manchester United were in a state of despair. They needed a hero.

Sergio Aguero’s iconic goal against QPR in the dying stages of the 2011-12 season had snatched the title away from United’s clutches in the most soul-crushing and agonising fashion imaginable.

That goal was replayed everywhere they looked. It was like a recurring nightmare that served as a reminder of how they threw away an eight-point lead to their noisy neighbours.

Sir Alex Ferguson had to find the perfect response, and he looked to an old enemy to help him defeat his new rivals.

Over in north London, Robin van Persie had just won the PFA and FWA Player of the Year awards after scoring 30 goals in 38 league appearances. Yet despite his world-class talents, the striker didn’t have the glittering CV to show for it, and he was looking to leave Arsenal after eight years at the club.

Ferguson had changed his transfer strategy, targeting younger players who had a resale value, but United ripped up the rulebook. United had lost out on the title by goal difference and needed someone who came with a guarantee of goals. And who better than the most prolific striker in England?

“I’m a lover of football. Manchester United breathe football,” the Dutchman said at his unveiling. “I always listen to the little boy inside of me in these situations – when you have to make the harder decisions in life. What does he want? That boy was screaming for Man United.

It seems hard to believe with hindsight, but critics couldn’t understand why United had spent £24million on an ageing and injury-prone striker. It was viewed by some as a sign of desperation.

But Van Persie gave a sign of what was to come within minutes of his full debut, nonchalantly connecting with Patrice Evra’s cross to fire a half-volley into the top corner against Fulham. He was rolling. 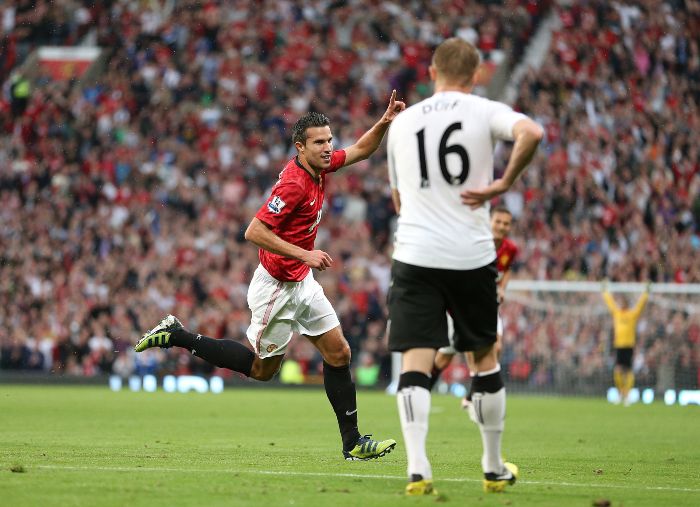 The idea that new signings need time to settle in obviously seemed ridiculous for the striker, who had no time to waste and a thirst for the trophy that had eluded him at Arsenal.

He scored seven goals in his next eight league games, including a hat-trick away at Southampton.

The rest of the United squad may have been bereft of genuine world-class quality, but they could rely on Van Persie to produce a moment of magic that would turn draws into wins pretty much whenever they needed it.

Van Persie had already scored crucial goals against Chelsea, Liverpool and his former club Arsenal, but his biggest test came at Manchester City in December 2012.

As the clock ticked down with the scores level at the Etihad, the striker stepped over the free-kick and his deflected strike sealed the three points and shifted the balance of power back to the red side of Manchester.

While his goal record was certainly impressive, Van Persie had so much more in his locker than he is often given credit for.

The Dutchman had the technique and guile of Dennis Bergkamp combined with the goal-scoring prowess of Ruud van Nistelrooy. Winning that league title wasn’t enough for Van Persie, he had to do it in style as well.

Just like his manager, Van Persie also had an aura and arrogance that inspired others and elevated the performances of those around him.

The striker had single-handedly transformed a relatively average United team into the runaway league leaders, and they weren’t going to throw away another lead to City.

Admittedly, Van Persie had a goalscoring drought between February and April, but the Premier League was practically wrapped up by then.

He rediscovered his form towards the end of the season to carry the side over the line and it was only fitting that he sealed their triumph in the most audacious fashion.

Van Persie had developed a knack for scoring outstanding volleys throughout his career but saved his finest for when United wrapped up the title against Aston Villa.

With United 1-0 up, Wayne Rooney spotted Van Persie making his trademark run and the Dutchman latched on to his pass by hitting a stunning first-time over-the-shoulder volley past a helpless Brad Guzan.

On this day in 2013, he scored THAT volley against Aston Villa, to clinch the title for United. 🙌pic.twitter.com/k4xyP8GtJk

“I remember Arsenal manager Arsene Wenger saying to me ‘he’s better than you think’ when we concluded the deal. He was right,” Ferguson said after that game.

“In terms of impact, he has had as big an impact as anyone I can imagine. Eric Cantona was an incredible impact player and I have been very, very lucky in that I have had some fantastic strikers right through, probably 10 great strikers at the club.”

Van Persie finished the season with the title he had craved and a second Golden Boot in as many years after 26 league goals.

The forward wasn’t able to replicate that form under David Moyes or Louis van Gaal, but he will always be remembered as Ferguson’s parting gift, providing the legendary manager with the farewell that his career deserved.