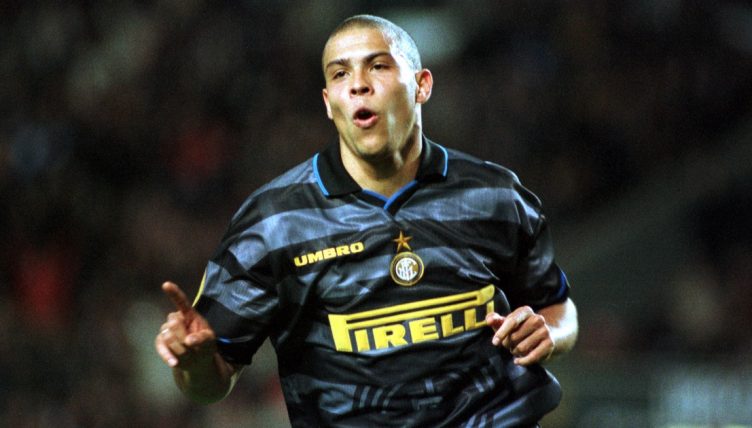 When Ronaldo signed for Internazionale in the summer of 1997 for what was a world record £19.5million deal, few could have predicted he would go on to win just one trophy in the black and blue of the Nerazzurri.

While Scudetto success ultimately eluded the Brazilian at the San Siro, Inter’s triumphant 1997-98 UEFA Cup campaign still stands as a testament to the player Ronaldo was and probably could have been were it not for the two career-threatening knee knacks that robbed him of the pace and agility which were hallmarks of those early heady days at Barcelona and Brazil.

In a season where some very questionable refereeing decisions denied the Brazilian a proper crack at reigning champions Juventus, Inter’s adventures in Europe served as the perfect tonic to those domestic woes, coming at a time when top clubs still rightly regarded the UEFA Cup as a cup worth winning, rather than an inconvenience or consolation prize.

It was a competition Ronaldo thrived in, with Il Fenomeno in his element under manager Gigi Simoni from the very first round, and all the way up until the final itself, where the Brazilian’s all-action performance against Lazio at the Parc des Princes earned him a Man of the Match award.

While future Newcastle megaflop Stephane Guivarc’h finished the campaign as the tournament’s top scorer (three of his goals came against OFI Crete), it was Ronaldo who popped up time and time again to grab games by the scruff of the neck.

Each of his six goals tells a different story, each one a moment of sublime genius or sheer blunt-force willpower. This is the story of those six goals.

On paper, Inter should have made easy work of a first-round tie against Neuchatel Xamax. However, the Nerazzurri had previous when it came to Swiss teams. Two years earlier, Lugano had dumped them out of the UEFA Cup at this same stage in humiliating fashion.

Xamax were no slouches, having finished a close second in the Swiss Super League the previous season under legendary manager Gilbert Gress, a mentor of Arsene Wenger. They gave Inter quite a scare in the first leg too, with the teams going in 0-0 at the break.

It took the intervention of Ronaldo to calm the nerves with the Brazilian breaking the deadlock with nearly an hour played. The goal was a typical poacher’s finish, with Ronaldo pouncing on a parried shot from compatriot Ze Elias to fire the ball into the roof of the net from close range.

Normal business resumed with his fellow Brazilian doubling the lead before full-time and Inter ultimately winning 4-0 on aggregate.

Inter had a mountain to climb going into the second leg of their third-round tie with Strasbourg, having lost 2-0 to the French side in the first leg. The 1997 Coupe de la Ligue winners had already proven they were no walkovers in the competition having eliminated both Rangers and Liverpool en route to this tie.

Bolstered by a solid spine that included future Leeds midfield battler Olivier Dacourt and defender Valerien Ismael, who later joined Bayern Munich, Les Bleu et Blanc must have fancied their chances of keeping the Nerazzurri at bay, having done exactly that in the first leg.

But after just 27 minutes, the fightback was on courtesy of Ronaldo, who opened the scoring with a perfectly placed daisy-cutter of a strike from the edge of the area after the ball was played short to him from a free-kick. Inter drew level four minutes into the second half through Javier Zanetti with Diego Simeone completing the comeback with a third goal 16 minutes from time.

Less than a year on from the heartbreak of losing the previous year’s UEFA Cup final to Schalke, Inter found themselves going up against the Gelsenkirchen side in the quarter-finals.

Little had separated the two sides the last time they met and with a young Jens Lehmann racking up more than four hours without conceding a goal in the UEFA Cup going into this game, Inter certainly had their work cut out for them.

But it took Ronaldo just 17 minutes to end Lehmann’s run with arguably one of his best goals for Inter. Picking up the ball with his back turned to goal and a Schalke defender breathing down his neck, the Brazilian quickly turned, evading the challenge of another opposition player before passing the ball to Youri Djorkaeff on the edge of the box.

Continuing on at pace, Ronaldo then collected the ball from the Frenchman before speeding through a sea of white Schalke shirts and firing the ball past Lehmann into the top corner, with the German goalkeeper collapsing in a heap, helpless to stop the rocket of a finish.

Inter went on to win 1-0, progressing past the UEFA Cup holders thanks to a 1-1 draw in Germany secured courtesy of a Taribo West header in extra time.

Inter took a fragile 2-1 lead into the second leg of their semi-final clash with Spartak, which was played in a snow-covered Dinamo Stadium in Moscow. Many Nerazzurri fans feared the worst too when Andrey Tikhonov opened the scoring for the hosts after just 11 minutes to put the hosts in a commanding position.

Spartak’s home form had been crucial to their progress this far, with the Russians winning each of the four games they played in Moscow, including a victory over an Ajax team who had reached the Champions League semi-finals the previous season.

Just a single goal had been conceded in the Russian capital during this run and even that was a mere consolation strike in a 5-1 drubbing of FC Sion.

Playing on a muddy pitch that made passing difficult, Ronaldo still found a way to turn the tie back in Inter’s favour, starting with a crucial equaliser on the stroke of half-time. With the Spartak defence struggling to clear a Zanetti cross, Ronaldo capitalised to full effect to fire the loose ball past Aleksandr Filimonov from close range. Spartak’s away goal advantage was no more.

With the Russians pushing forward in search of the goal now necessary to take the tie to extra time, more gaps began to emerge in the Spartak defence with Ronaldo taking full advantage.

Another brilliant goal showcasing all of the Brazilian’s world-beating attributes, this time the move began midway inside the Spartak half with O Fenomeno controlling the ball from a Luigi Sartor long throw with his knee, and with his back to goal, before brilliantly turning a Spartak defender and attacking at pace.

With Spartak players closing in all around him, Ronaldo still had the speed of thought to poke the ball over to Ivan Zamorano on the edge of the box, using the outside of his right foot.

The Chilean duly returned the favour by playing a pass back to Ronaldo, who skipped past two Spartak defenders before rounding the goalkeeper and sealing Inter’s progress to the final 4-2 on aggregate.

“But could he do it on a shit pitch in Moscow?”

Ronaldo’s finest 90 minutes for the Nerazzurri were reserved for the final in Paris with the Brazilian going into the game with something of a point to prove.

Though Ronaldo had scored when the teams met earlier in the season during a 1-1 draw at the San Siro, Sven Goran Eriksson’s team had come out on top later in the campaign with a 3-0 drubbing in Rome where defender Alessandro Nesta got the better of the Brazilian.

Lightning would not strike twice at the Parc des Princes though, with Ronaldo running much of the game for Inter in a performance that saw him regularly dropping deep to collect the ball and instigate attack and attack for the Nerazzurri.

A searing ball of energy throughout the 90 minutes, he could easily have scored a hat-trick with highlights reels from that legendary night showcasing the mazy runs and efforts that struck the woodwork in what was an entirely one-sided final.

RETRO GOALS: 20 years ago today Inter beat Lazio 3-0 to win the UEFA Cup. Zamarano, a screamer from Zanetti, then a classic Ronaldo finish win the trophy in style. pic.twitter.com/Mw5ZagYeno

His goal finally came on the 70-minute mark, with Ronaldo latching on to a brilliant through ball from substitute Francesco Moriero before finding himself one-on-one with Luca Marchegiani in the Lazio goal.

A swivel of the hips, coupled with a few of his familiar stepovers did the damage with Marchegiani sent sprawling to the ground, leaving Ronaldo to dance around the prone shot-stopper before slotting the ball into the empty net.

A classic goal to ensure his brilliant debut season at Inter counted for something, Ronaldo’s time in Italy may not have resulted in the kind of haul of silverware his ability merited but that UEFA Cup campaign and the stories wrapped around prove, on his day, there was simply no one better than O Fenomeno. 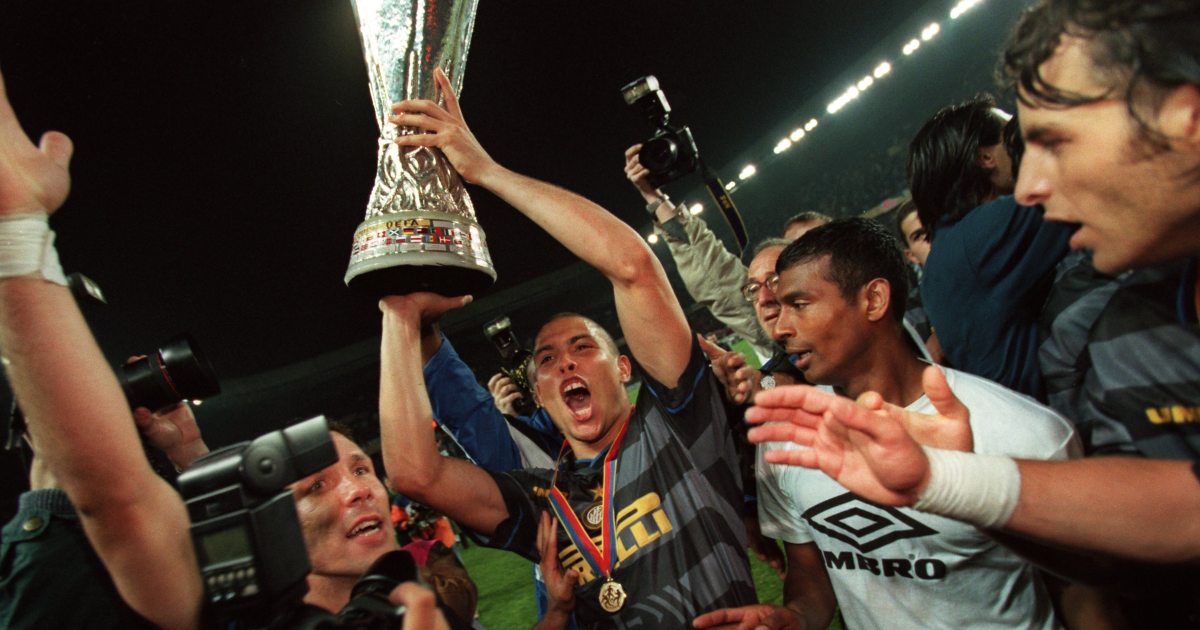 READ: A forensic analysis of Ronaldo’s Inter masterclass in the 98 UEFA Cup final