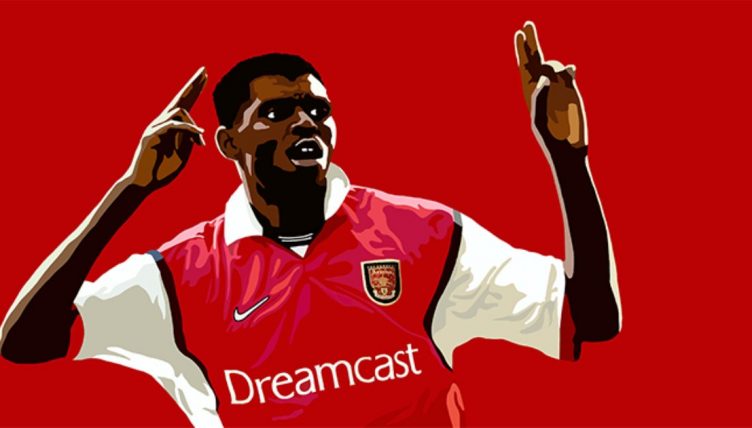 For a lot of Arsenal fans, Nwankwo Kanu is the ultimate cult hero. While he never managed to reach the heights of the other strikers at the club, his phenomenal footwork and two-fingered salute made him an icon.

It’s the final minute of the match at Stamford Bridge, and the atmosphere is electric. Chelsea were 2-0 up and cruising going into the final quarter of an hour, but Kanu had made sure another bad-tempered London derby would be fought until the end with two close range-finishes on 75 and 83.

The first, toe-poked from inside the box, wasn’t much to look at, and the second – although a beautiful use of space – was only marginally easier on the eye.

Now, with the seconds ticking down towards the final whistle, the young Nigerian chases down a lax pass to the left wing by Marc Overmars. He throws himself in the way of an attempted clearance by the scrambling Albert Ferrer, and suddenly he finds himself in acres of space in front of Arsenal’s travelling fans.

What happens next epitomises Kanu, and remains one of his defining moments in red and white.

With rangy great strides on his long, whippy legs, he charges towards the box and onrushing Chelsea stopper Ed de Goey.

Skipping past the keeper with the aid of some fantastic footwork – but not before de Goey gets a hand on the ball and sends it pinballing madly across his legs – Kanu’s movement seems skittish somehow, almost spidery in its many-limbed complexity.

Nonetheless, he stays perfectly calm as he executes a seemingly effortless finish, sending a shot sailing over the pogoing heads of Marcel Desailly and Frank Leboeuf and into the top right-hand corner of the net.

Kanu was never going to be the main man at Arsenal, arriving as he did at the goalscoring peak of Nicolas Anelka and not long before the emergence of Thierry Henry.

At once awkward and capable of great elegance, he was a very different sort of forward, a mercurial genius who scored goals not in great quantities but often with sublime skill.

However, the 6ft 5in striker already had a cultish air about him when he was transferred to Arsenal from Inter Milan, having made his name as a prodigy at Ajax before struggling in Serie A, mitigated by the fact that he had overcome surgery for a serious heart defect during his time at the San Siro.

He grabbed Arsenal fans’ attention early on with another derby goal scored a few months after joining the club, flicking the ball backwards over the head of Luke Young before thumping home against Tottenham at White Hart Lane.

It was goals like this which made Kanu a legend in north London, shows of inventiveness and imagination which so often left the breath of spectators caught in their throats.

That’s not to say he wasn’t a master of poacher’s goals and five-yard finishes, only that he had a beautiful contrast to his game, a sense in which he was both a first-touch phenomenon and constantly tripping over his own feet.

Along with all that, he had a disposition which fans couldn’t help but find appealing, celebrating his strikes with all the enthusiasm of a gangly teenager who had just beaten a mate at Sensible Soccer.

His face was plastered with a grin whenever he scored, while he even pioneered a trademark goal ritual long before Gareth Bale or Cristiano Ronaldo: a far cry from their slick efforts at self-promotion, his was a gawky two-fingered salute which he perfected in the game where he backheeled in against Middlesbrough. 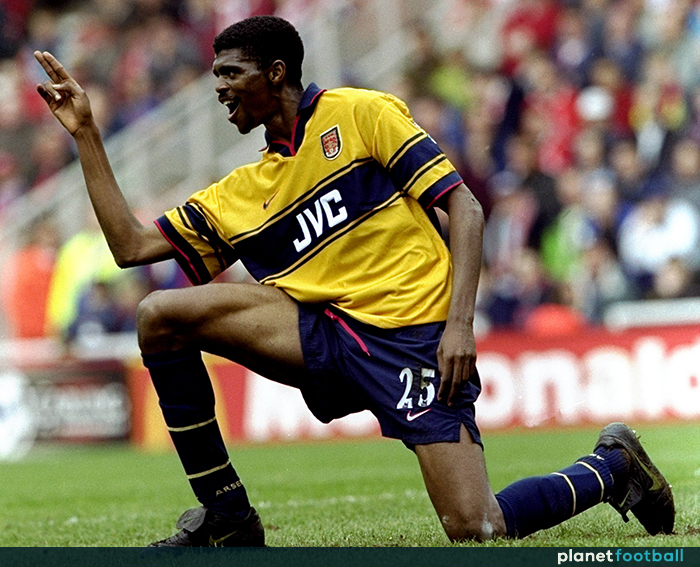 In temperament, Kanu was an antidote to ‘Le Sulk’ Anelka; for flair, he rivalled Dennis Bergkamp at times; he was scoring with backheels long before Henry, and as such he took on iconic status in his own right despite the plethora of talent around him.

Perhaps the only place he was more loved than at Highbury was in Nigeria, where he was not so much a cult hero as a national treasure. As well as helping the Super Eagles to the knockout stages of France 98, he won Olympic gold with his national team and managed to outshine even Ronaldo and the titans of Brazil.

Like all the best cult heroes, Kanu flirted with obscurity during his later years at Arsenal, adding another enigmatic layer to his personal legend.

His number of starts gradually declined and reached their lowest ebb in the 2003-04 season, though he did make enough appearances to earn a league medal and can count himself among the hallowed number of the ‘Invincibles’.

He departed at the end of that season, beloved of the fans in a way in which only a select few Arsenal alumni have been since. He also left with a clutch of winner’s medals, having contributed to two Premier League titles and twice won the FA Cup.

Surprisingly, that would not be the end of Kanu’s silverware haul in England. Having spent a couple of slightly underwhelming seasons at West Brom, few would have predicted that he would add to his trophy cabinet after joining Harry Redknapp’s Portsmouth in 2006.

While their FA Cup triumph two years later will always be associated with the financial disaster which came afterwards – Kanu was one of an expensively assembled squad whom the club struggled to move on during Pompey’s struggle against liquidation – the former Arsenal man nonetheless gave Portsmouth fans a moment to cherish forever.

Having nudged in the winner in their FA Cup semi-final against the Baggies, he repeated the trick in the final against Cardiff, adding that last lustre to his idiosyncratic legacy.