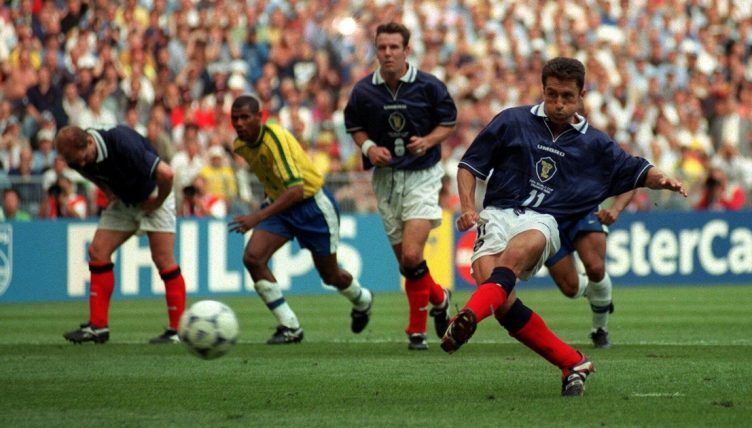 Craig Brown’s final rallying cry from the bowels of the Stade de France was certainly optimistic. The world champions had the likes of Cafu, Roberto Carlos, Rivaldo and Ronaldo in their ranks and were expected to retain their title at France 98.

And they were certainly expected to swat aside Scotland in the opening game. But their manager had a plan.

“I spoke to Bobby Robson, who had Ronaldo at PSV,” Brown told the BBC last year. “I asked how we stop him, and he said: ‘You don’t, just don’t let him get the ball’.

“Most of his passes came from Cafu at right-back, so I told Christian Dailly, ‘If Cafu crosses the halfway line and passes to Ronaldo, you’ll be sitting beside me on the bench.'”

While Ronaldo was kept quiet, Scotland fell to an unfortunate 2-1 defeat. It was the start of what is, to date, the last World Cup graced by the Tartan Army.

June 1998 was a different world; C’est La Vie by B*witched was at number one, there was no Scottish Parliament and neither Google nor smartphones existed.

And Scotland were gearing up for their eighth finals appearance with a training session with Rod Stewart and a phone call from Sean Connery.

It wasn’t ideal preparation for a side that had never progressed beyond the group stages and things took another turn when goalkeeper Andy Goram left their training camp in New Jersey.

“To his credit, he spoke to me and sent me a lovely letter saying he had to go for personal reasons,” Brown remembered. “I still have it to this day.

“It was a big story but we were in America and were going to a World Cup. We had been before and it could be a bit of a star-studded affair.

“Two years earlier [before Euro 96], Rod Stewart invited us to his concert at Madison Square Garden. About 5,000 outside couldn’t get in, meanwhile, our boys were up on the stage.

“He visited us again and we had him take part in training, he coped admirably.”

Stewart wasn’t the only man to offer Brown and his team their best. “I remember getting a call from Sean Connery. The girls at the office would think it was a wind-up. My secretary would say, ‘That’s Ally McCoist on saying he’s Sean Connery’.”

After missing out on the 1994 finals, excitement was building rapidly in Scotland. Many Scottish families organised their summer holidays around the match with Brazil and, even though the chances of getting a ticket were minuscule, the game created a huge buzz across the nation.

Many fans felt the need to just be in Paris and an estimated 60,000 Scots made the trip to the French capital. In many ways, it was the closest Scotland had ever been to playing in the World Cup final.

The build-up before June 10 was torturously long – and the period immediately before kick-off was the worst for the Scottish players.

Celtic midfielder Craig Burley spoke about the moment the enormity of the occasion hit. “It wasn’t until we headed to the ground,” he told FourFourTwo in 2010.

“We stayed at this chateau in Paris the night before, and for some reason, Tony Blair turned up and did all the bollocks handshake stuff. But when we got on the bus we saw fans everywhere! Brazilian, French, Scots. It hits you like a ton of bricks.”

And his view on Brown’s last-minute rallying cry? “We burst out laughing. You turn round and see Dunga, Rivaldo and Ronaldo – they aren’t shitting themselves.” 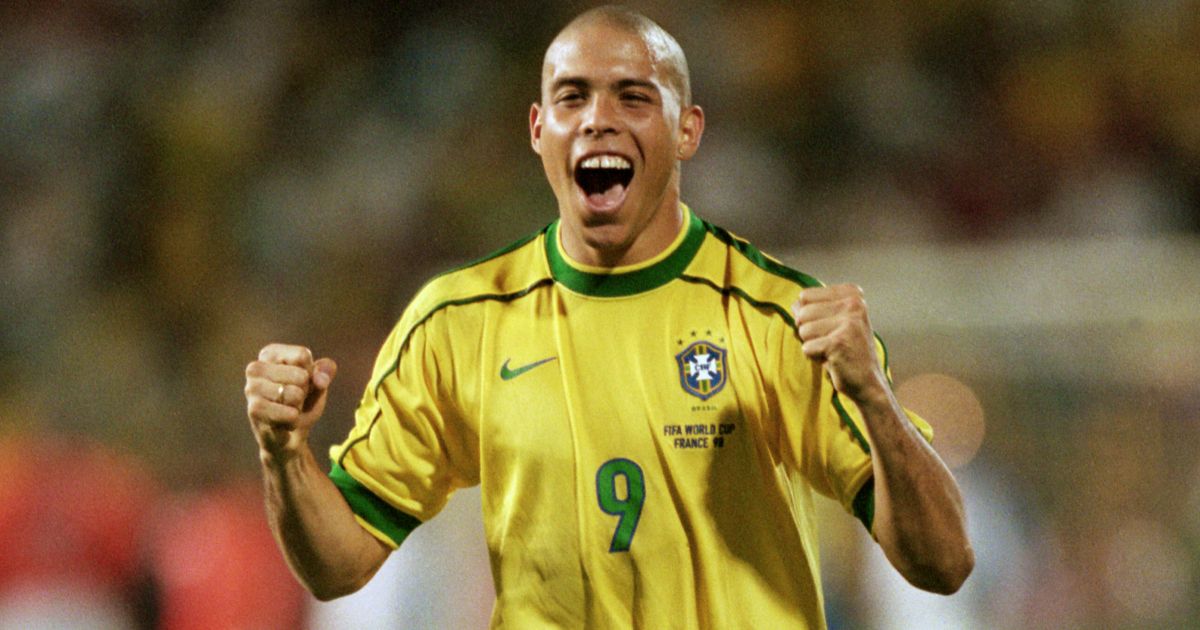 But, after falling behind to an early header from Cesar Sampaio, Scotland gradually began to acquit themselves. The absence of Gary McAllister through injury was a huge blow, but Brown’s side had some quality players.

“I had three players who had just won the English Premier League with Blackburn Rovers, Colin Hendry, Billy McKinlay and Kevin Gallacher,” Brown told the Daily Record in May 2022.

That wasn’t all; Jim Leighton was goalkeeping royalty while Paul Lambert had played a starring role in Borussia Dortmund’s Champions League victory in 1997.

Monaco midfielder John Collins was another classy operator. And it was Collins who levelled from the penalty spot before a gut-wrenching Tom Boyd own goal 16 minutes from time gave Brazil a narrow victory.

“They did everything asked of them,” said Brown. “It gave us belief for what lay ahead.”

Norway and the Tartan Army

Bordeaux, an elegant city in the southwest of France, hadn’t seen anything quite like it.

The rugby-loving metropolis had been invaded by Scots playing bagpipes and Norwegians sporting mock Viking helmets with horns before their Group A clash.

“I’ll never forget the scene at a local shopping mall where a lot of Scotland fans had gathered to eat, drink and be merry,” journalist and Tartan Army member Tam Cowan remembered.

“It was right next to a kids’ play area and a charming young French woman was trying to encourage her cute little daughter to have a shot on the slide.

“To show her how it’s done, a big hairy Tartan Army foot-soldier clambered up the wee chute and, as mummy and daughter stood at the bottom and gazed upwards, he gave himself a push and started to slide down.

“Unfortunately, his kilt got caught in the metal frame and ended up around his neck as he began his descent. I think the French mother and daughter are still receiving psychiatric help.”

Scotland were the better side during a scoreless first half. But, in time-honoured fashion, loose defending allowed Havard Flo to head home within a minute of the restart.

The Tartan Army became mute but Burley ensured such silence was only temporary. “We went 1-0 down, Colin Calderwood got injured and I ended up playing down the middle at last,” he recalled.

“I got on the end of a long ball and lobbed the keeper. It was awesome when it went in, although I didn’t look awesome the next day. There was a photo of me celebrating with no front teeth.

“The headline was ‘Fangs A Million!’ But it kept us in the tournament.”

In truth, the 1-1 draw was more Anglo-Saxon bustle than Latin finesse. The New York Times described the ball as “spending much of the time high in the air, thumped forward in the vague hope that it would land on a friendly head or foot.”

But Scotland had played well and remained in the World Cup. The Tartan Army gorged itself on Bordeaux wine in celebration.

Thousands flooded into Saint-Etienne with hope and expectation. Beat Morocco and the promised land of the knockout rounds beckoned.

But, while Scotland have specialised in glorious heartbreak down the years, this was simply a gubbing.

Morocco scored three unanswered goals while Burley – sporting a newly-bleached blond trim – was dismissed for the recently outlawed tackle from behind.

Even had they won, Norway’s victory over Brazil would have sent Scotland out anyway.

“It was not a 3-0 game,” defender David Weir said. “But the way football works, it doesn’t really matter about the game when you lose 3-0. The scoreline matters.”

Brown agreed. “Every statistic, apart from goals, favours Scotland,” he told The Guardian in 2021. “We had more possession in both halves – and played most of the second with 10 men – more shots on goal, more shots on target, more corner kicks.

“Then I read words like ‘humiliation’, which was quite annoying. Morocco were the top-ranked African team in that World Cup. I was over in Casablanca watching them before the finals and it was a football-crazy nation.”

“Morocco thought they had qualified and only didn’t because Norway beat Brazil,” defender Jackie McNamara remembered. “That gives you an idea of how competitive they were.

“As always with Scotland, we think we are the founders of football and deserve to win. The players didn’t underestimate them but the general fanbase saw that as a game we should be taking care of.”

There was none of this perspective in the immediate aftermath of Saint-Etienne. One newspaper headline the next day read: ‘Moroccans 3, Morons 0’.

And that was that. Scotland were heading home prematurely from another World Cup with their tails between their legs.

But the Tartan Army left a lasting impact. While England fans were involved in rioting in Marseille, the Scots impressed their French hosts with good humour and their boisterous partying.

FIFA recognised them as the tournament’s best supporters, while the city of Bordeaux took out a full-page advertisement in Scotland’s most popular newspaper.

“Come back soon,” the ad read. “We miss you already.” And the World Cup has missed Scotland’s unique presence for over 20 years.