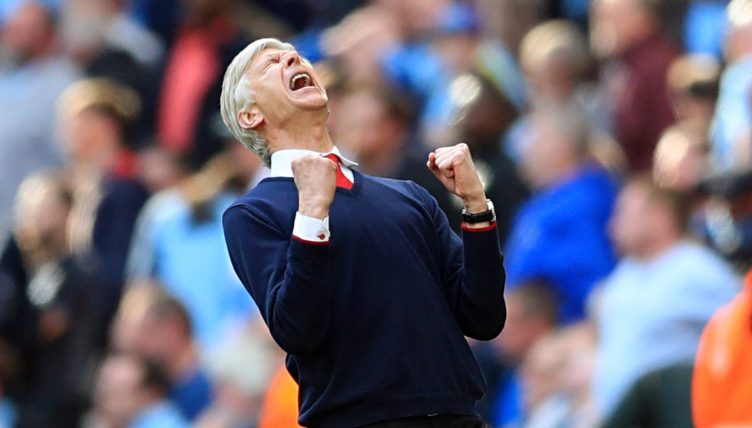 Arsenal thought Arsene Wenger was holding them back by the end of his reign, but it wasn’t long before fans were longing for the days of Wengerball again – and you can’t blame them.

When Arsene left the club in 2018, a large portion of the fanbase was glad to see the back of him. Since moving to the Emirates, their club had won three FA cups and nothing else. ‘Fourth place isn’t a trophy,’ the banners would read; ‘Time for change.’

Granted, the trophy haul wasn’t great, but Le Professeur’s later sides were, at their best, absolutely beautiful to watch and at their worst, still bloody great fun at least. Things really weren’t that bad. And here are seven matches from the post-Highbury era that prove it.

When Arsenal drew the reigning European champions in the first knockout round of the 2007-08 Champions League, pretty much everybody wrote them off.

AC Milan, featuring the likes of Kaka, Andrea Pirlo and Paulo Maldini, had never lost to English opposition on home soil so, heading to the San Siro after a 0-0 draw in London, they looked almost certain to progress.

Arsenal were the better of the two teams from the off, playing excellent football, but they just couldn’t find a breakthrough. Cesc Fabregas, who put in a stunning performance, came closest when he hit the bar, while Phillip Senderos and Emmanuel Eboue both missed huge chances.

With just five minutes left and the tie looking set to go to extra time, Fabregas again tried his luck from distance, and this time he sent it into the bottom left corner. Emmanuel Adebayor then tapped in a cross from Theo Walcott to secure a win that Wenger’s side fully deserved

🗓 #OnThisDay in 2008, Arsenal reached the quarter-finals & became the first English side to beat AC Milan in the San Siro 💪#UCL @Arsenal pic.twitter.com/9q2fzIJYQ8

In Wenger’s time in charge of Arsenal, he had often struggled in games against other top sides, particularly away from home. And it looked set to be the same old story again when John Terry put Chelsea ahead just before half-time in this match after Robin van Persie cancelled out Frank Lampard’s opener.

But whatever Arsene said to his team in the half-time break worked wonders. Club legend Andre Santos quickly levelled things up again before Theo Walcott gave Arsenal the lead.

In typical Wengerball fashion, though, the team continued to attack, because they were just great fun, and were punished when Juan Mata made it 3-3 with 10 minutes left.

However, a Gerrard-esque slip from Terry gave Van Persie a chance to give his side the win with five minutes left, and with the form he was in, he was never going to miss. The Dutchman then finished off a lethal counter-attack in stoppage time to make it five and give Arsenal fans one of their best days out at Stamford Bridge.

Is this the best ever moment for Arsenal fans in their new home? Probably. When they lined up to face Barcelona in 2011, the Catalans were the best team in the world and some even considered them to be the best club side ever, while the home side had Johan Djourou and Emmanuel Eboue in their backline. Surely Monsieur Wenger couldn’t pull this off?

An early David Villa goal and sustained Barcelona dominance suggested not. Arsenal, though, largely thanks to a breakout display from Jack Wilshere, kept the deficit at 1-0 to give themselves a chance heading into the closing stages.

Their hard work paid off when Van Persie fired past Victor Valdes from a tight angle with 12 minutes to go.

The home team surely would’ve taken a draw at that point, but that was not in Wenger’s nature. Just five minutes later, Andrey Arshavin slotted in the winner to send the Emirates wild and give the Frenchman one of his greatest wins.

There’s never worse for an Arsenal fan than losing to Spurs, and nothing better than beating them. Thirty-five minutes into this North London derby, it looked the latter would happen, with the much loved Adebayor putting his new side 2-0 up. Not to worry, though, as beating Spurs was a bit of a speciality for Wenger.

Bacary Sagna and Van Persie quickly levelled things up in the 10 minutes before half-time, giving the home team the momentum heading into the final 45 minutes.

The second half was a demolition. Tomasz Rosicky completed the comeback straight after the break before Walcott scored a quick double to secure the three points and, more importantly, the bragging rights.

Unstoppable going forward, terrible at the back and all in all, bloody great fun; this was vintage post-Highbury Arsenal. They might give you a heart attack, but at least you’ll have a smile on your face when you go.

Wenger’s side took the lead three times in the first 70 minutes and were pegged back each time. The attackers of the team then clearly realised they couldn’t rely on their backline and preceded to give themselves a four-goal lead instead.

Walcott was the star man, completing a hat-trick with some serious persistence, while Olivier Giroud got two off the bench. Who needs Robin van Persie, eh?

By 2014, every man and his dog knew that Arsenal hadn’t won a trophy for nearly a decade. However, they were surely going to end it comfortable given a rather easy FA Cup final match up against Hull.

Were they f*ck, this is Arsenal we’re talking about. They live to entertain.

Ten minutes in, they were 2-0 down. Even after Santi Cazorla quickly made it 2-1, the favourites looked pretty clueless as to how to score another, and find themselves trailing with 20 minutes to go.

Mercifully, Laurent Koscielny bundled the ball in to take the game to extra time where Aaron Ramsey fired in the winner.

Wenger, in a manner so fitting of his latter years at the club, had shaken off the huge monkey on his back to bring joy to Arsenal fans everywhere. Good times.

Relief is an understatement 😓 #AFC pic.twitter.com/WlgCyZOllJ

Unlike in 2014, Arsenal headed into this FA Cup final as huge underdogs. Chelsea had just stormed to the Premier League title while Wenger and co were forced to start with a back three of Rob Holding, Per Mertesacker and Nacho Monreal.

Nevertheless, the Gunners defied all logic to outplay Conte’s side, taking the lead in the first five minutes through Alexis Sanchez before Ramsey once again scored the winning goal at Wembley to give Wenger his seventh FA Cup.

Looking back, it could be argued that Wenger should have walked away from the club here to go out on a high, but given how things have gone since he left, it’s probably a blessing for the club that he gave them one more year of his service.