The night Shola Ameobi introduced himself as a Newcastle hero 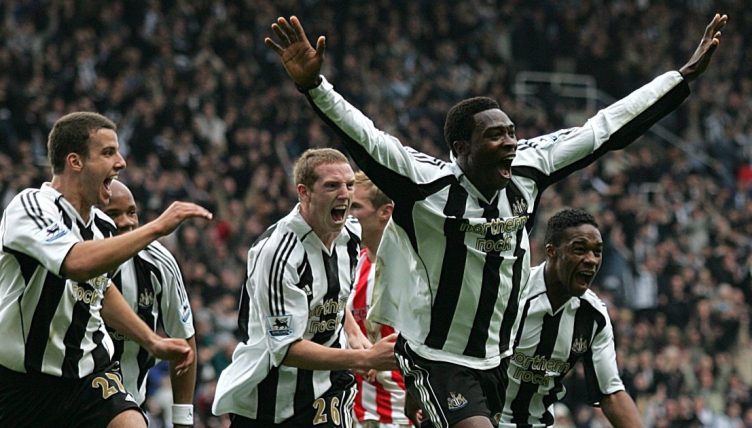 It’s strange to think there are football fans out there now who never knew the ugly majesty of the Intertoto Cup.

The competition only existed under UEFA’s auspices for a decade and a bit, being discontinued when the UEFA Cup – for which the Intertoto Cup winners qualified – was rebranded as the Europa League.

It was never the most glamorous – English clubs initially refused to take part, resulting in Tottenham fielding a phenomenally weakened team featuring players signed purely for the Intertoto Cup.

Nor was it the easiest to understand – multiple ‘finals’ were held, with the victors progressing to the UEFA Cup proper, and the Intertoto Cup’s de facto champion was the side that made it the furthest in the main competition.

But for all its flaws, it produced some memorable moments.

Pub quizzers will forever recall that Andriy Arshavin’s professional debut came against Bradford City in the early rounds of the competition, while Newcastle United supporters might remember a sunny August game which heralded the arrival of a young man who – like Arshavin at Zenit – would go on to become a local hero.

There is often a bizarre tendency for people to misremember the specifics of football matches over time.

Sometimes we remember a goal being scored from closer in or further out than the reality – this is something people mentioned to me after I wrote about Mario Stanic’s wonder-strike for Chelsea against West Ham – but there are occasions when the false memories run even deeper.

The subject was raised by my friend Billy MacFarlane in this article for The False Nine, where he explains the phenomenon like so: ‘The fallibility of memory is much more common than most of us think and it results not only in incidents which can be falsified but in distorting our views of previous and future events.’

In explaining real-life examples, he raises the melding of memories when it comes to Gareth Bale terrorising Maicon during two Champions League group stage games, but it has happened in other, far less noteworthy fixtures. Fixtures like an Intertoto Cup ‘final’ back in 2001.

I have been fortunate enough to find video footage of the match in question, which, while helpful for this particular article, has also destroyed the myth of the game being the Shola Ameobi masterclass I remember it as.

Bobby Robson’s side had gone into the second leg against Troyes having drawn 0-0 in France, and ended up falling just short, drawing 4-4 to go out on away goals. Here is a selection of what I have misremembered from that evening:

– For a decade and a half I’d thought it was David Hamed, not Mehdi Leroy, whose long-range free-kick was spilled over the goalline by Shay Given.

– I was certain Shola Ameobi had had a hand in all four of the hosts’ goals, but Nobby Solano’s opener came a few seconds after the striker had given the ball away with a needless flick and was nowhere near the action.

– Again, perhaps in a retrospective attempt to piece together the other flawed pieces of the narrative, I had believed Ameobi had come on as a sub after Troyes’ fourth goal. In truth, he had been on the whole time, just not doing all that much.

My willingness to maintain such a rose-tinted memory of Ameobi may come, at least in part, from his limited profile before that game.

To see a teenager take the game by the scruff of the neck, which he did with his goal and the winning of a penalty, will have undoubtedly made an impact – even if it did come when his team was trailing heavily at home to the seventh-best team in France.

It also owes some of its makeup to what followed – years of failure to hit the heights predicted of him only served to exaggerate the quality of that performance in 2001 – but it is the effort and desire to make things work that have endeared him to fans of the club to this day.

Newcastle fans have always taken kindly to a local boy done good, but they might consider themselves to have been spoiled by what Alan Shearer was able to offer in his decade at the club.

“I’m never going to be Alan Shearer. I’m Shola Ameobi. But obviously I do want to succeed Alan Shearer,” Ameobi told The Guardian back in 2004.

“If I could do half of what he’s done for Newcastle United I’d be a happy man.”

Ameobi’s best return for one Premier League campaign – nine goals in 2005-06 – would have represented an off-year for the man who helped him find his feet at the club.

But the knowledge that he was capable of brilliance and unpredictability helped ensure his efforts never went unappreciated.

Indeed, part of his popularity came from the fact that such brilliance often came as a surprise even to him.

Those early performances might have been the limit of his explosive ability, something which he would be able to equal on occasion but never better on a consistent basis, but it was clear that he never stopped caring and never stopped trying to be the best version of Shola Ameobi possible, even when it was clear that ceiling was lower than some might have hoped back in the early 2000s.

The 2017-18 season was the first this century in which Newcastle United did not have an Ameobi in their squad. While Shola’s time at the club came to an end in 2014, younger brother Sammy continued to fly the flag, only to leave upon the expiry of his contract at the end of 2016-17.

And while Shola will always have his Champions League goal at the Camp Nou (for a time, he had a better goals-per-game record there than Lionel Messi), Sammy has his strike at White Hart Lane in 2014.

Both will remain popular among fans, but Shola is the one who started it all.

And, given the way many of his greatest moments seem ad-libbed at times, it makes sense that, for me at least, it all began with a misremembered 90 minutes pieced together clumsily after the fact.

The 17 best quotes on Alan Shearer: ‘The best No.9 Newcastle’s ever had’