Should have scored, Jeff: The art of missing a sitter, from Rosenthal to Bent 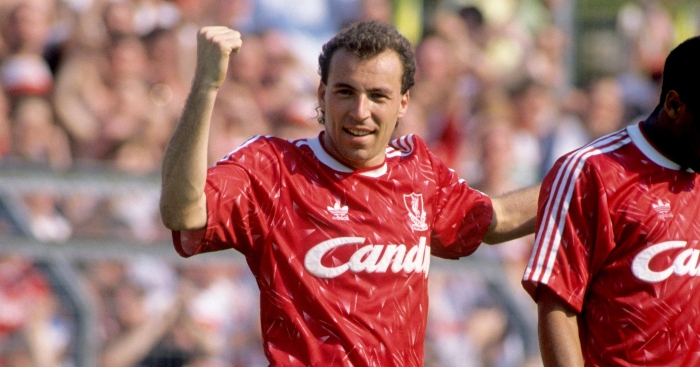 There are many wonders in football, but sometimes you can’t beat the beauty of an absolute f*ck-up.

Missing an open goal is quite possibly the most encapsulating of all mistakes, as agony is snatched from ecstasy in the matter of seconds.

On the anniversary of Ronny Rosenthal’s famous miss for Liverpool against Aston Villa, @Sid_Lambert looks at four of his favourite sitters from Premier League history…

These were bad times for Liverpool. Graeme Souness insisted that the team was still searching for its identity after the glory years of Kenny Dalglish. The more cynical observers said they’d already found it: they were shite.

The under-pressure boss needed a win at Villa Park. And it looked like his luck had turned when the normally-reliable Shaun Teale made a monumental cock-up that let in the opposition striker. Unfortunately that striker was Ronny Rosenthal.

The Israeli had burst onto the scene in 1990, scoring seven goals in eight games during a loan spell from Standard Liege that helped the Reds secure their 18th title. His red-hot form earned him the nickname ‘Rocket’ from the Kop. Two mediocre seasons later the rocket had started to fizzle out.

Rosenthal didn’t fit the keep-it-simple mantra of the legendary Boot Room. Why pass and move when you can get your head down, dribble round a few players and then smash it in from 30 yards? That was Ronny’s Achilles heel. He just couldn’t help himself.

So with Teale stranded, the Liverpool striker skipped around an advancing Nigel Spink to leave the entire goal at his mercy. Most players would have rolled it gently into the net. But Ronny wasn’t most players. He tried to give it a little extra razzle dazzle and, in doing so, hit the bar instead.

It’s a moment that defined his career. No one remembers the consolation goal he scored later in the game. Nor the 60-odd caps for his country. Or anything else of his 20-year career.

All they remember is that he missed. How did he fucking miss?

The late nineties was a strange time to be a West Ham fan. Harry Redknapp had tired of the domestic transfer market and started doing his shopping abroad, convinced he could find better value for money.

Some were better than others. For every Bilic, there was a Boogers. For every Rieper, a Raducioiu. France’s Ligue 1 had been one of the happier hunting grounds for Harry. Perhaps it was the proximity. Jump off the ferry at Calais, turn into the hypermarche, roll down the window of your Range Rover and begin negotiations: “Bonjour Monsieur, je voudrais un top, top player.”

So when Samassi Abou arrived from Cannes in the mid-season of 97-98, there was reason to be cautiously optimistic. His finest hour was against Barnsley in January, netting twice in a 6-0 win. His touch was sensational. The ball stuck to his feet like shit on a bear’s arse, as my old football coach used to say.

It was a display that saw him compared to Newcastle’s enigmatic Tino Asprilla. Though that comparison didn’t last long. The more he played, the worse he got. A sending-off against Tottenham in the very next game followed. Then came this appalling moment against Manchester United at Upton Park.

He left east London at the end of the campaign and spent the next few years in the French second tier, averaging less than a goal a season. Nevertheless, he remains a cult hero at Upton Park. After all, he really was great against Barnsley.

You’ve had a stinker there, son.pic.twitter.com/XO4AnioyIT

Nwankwo Kanu. You remember him. Tall. Gangly. Dubious date of birth. Whatever your recollection, there’s no denying that the Nigerian was not your conventional footballer.

During five years at Arsenal, he’d developed a reputation as the archetypal Scorer Of Great Goals But Not A Great Goal Scorer. Still who cared? Kanu was there for pure entertainment. He was an illusionist at heart; more tricks than a clown’s pocket and not afraid to use them.

After leaving Highbury, he joined newly-promoted West Brom and on a November afternoon at the Hawthorns in 2004, he took centre stage again. How his new club were in need of some of his customary magic. They’d had a rotten start. Rooted in the bottom three, they’d sacked Gary Megson and brought in Bryan Robson.

Captain Marvel’s first game in charge at home to Middlesbrough looked like a must-win even this early into the season.

With the scores locked, he made an inspired substitution by bringing on Geoff Horsfield. The big striker made an instant impact, pinging a low ball across the goalmouth where Kanu was lurking almost underneath the bar. Robson’s genius had won the game. Until it hadn’t.

Somehow Kanu defied the laws of time and space and managed to spoon the ball over the bar. Robson was crestfallen, unable to understand the horrorshow that unfolded before his eyes. Once again Kanu had made the impossible possible.

“My wife would have scored that,” said Harry Redknapp. If Darren Bent was in any doubt that his big-money move to Spurs was turning into a total clusterfuck, then it was gone now.

Here he was, a goalscorer of proven Premier League pedigree, being told that he was a worse finisher than a lady whose prime occupation was to keep Harry’s shelves stocked with Jam Roly-Polies. Make no bones about it, Bent’s Tottenham career was heading down the khazi.

In fairness to his manager, you would have fancied Sandra’s chances of hitting the target here. With the scores tied between Portsmouth and Spurs, David Bentley wriggled free down the left and picked out Bent beautifully.

With the whole of the goal to aim at, and David James already given up the ghost, he missed the target. It was a cast-iron stinker. And the stench of it followed him for the rest of his Spurs career.

Though Redknapp publicly apologised a few weeks later, Bent was flogged to Sunderland at the end of the season where his form – and luck – improved dramatically. He even scored the Premier League’s only goal with a beachball. Bet Sandra couldn’t do that.

‘Shouldn’t you be at work?’ Five times Des Lynam was just wonderful