‘Shouldn’t you be at work?’ 5 times Des Lynam was just wonderful 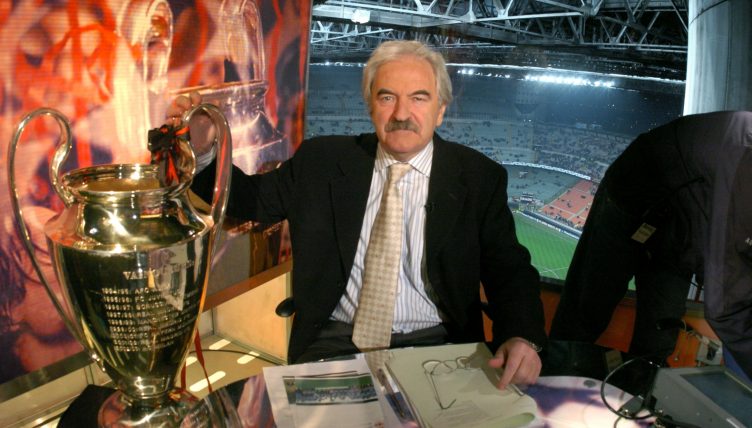 Des Lynam. You remember him. Grey hair. Moustache. A nod and a wink that made housewives across the land go weak at the knees. Sid Lambert remembers him at his finest…

Throughout the 80s and 90s, time with Des was a sporting ritual, his voice like a pair of silk pyjamas welcoming us to another glorious two hours in front of the telly.

And even when everything went wrong on the pitch, somehow Des just being there made everything immediately alright.

It should have been England, you know. After the heartbreak of Turin, it had been hard to think about the 1990 World Cup Final. Then the game started. And it was awful.

Some might describe Argentina’s gameplan as being an example of football’s dark arts. Most of us call it shithousing. Time-wasting, petty fouling and play-acting from first minute to last.

Andreas Brehme won it with a dodgy penalty, an act of great humanitarianism by the referee so we didn’t have to suffer through extra time.

It was an anti-climactic end to a tournament that had delivered no end of drama. Back in the studio, Des decides there’s no way to sugarcoat it. You’re no fools. It’s been a stinker and there’s no point pretending otherwise.

So let’s not dwell on the game and instead treasure the memories – with one last bit of Pavarotti.

It’s August 1992 and the Premier League is officially born. Sky have just forked out 300 million quid for a megabucks TV deal, with similar sums allotted for Richard Keys’ wardrobe.

The summer sees a coast-to-coast PR Blitzkrieg. If you haven’t got a Sky Sports subscription then Uncle Rupert wants to know why. There are print ads promising a “Whole New Ball Game” and high-end TV spots featuring Anders Limpar having breakfast in bed. Different times.

Meanwhile, on the BBC it’s a case of back to the future. Match of the Day is back on our screens after a hiatus and we couldn’t be happier. It’s time for Des to usher in a new era alongside a very earnest Gary Lineker and the joyous misery of Alan Hansen.

There are a few new faces, and a rule change here or there, but let’s not go over the top. It’s all still a bit of fun.

Football’s coming home, so put the telly on

The summer of 96. Blur and Oasis battling it out like musical heavyweights in the charts. Manchester United winning the league with kids (much to Alan Hansen’s disbelief). Young people across the land getting drunk on Alcopops to celebrate their exam results. What a time to be alive.

And then there’s the football. It’s coming home, you know. At least that’s what Skinner and Baddiel are telling us. Aside from their musical prowess, the Fantasy Football League hosts had re-enacted the opening ceremony featuring Poirot, Charlie George and Statto dressed as Mick Hucknall.

Now it’s time for the tournament itself. On the eve of the big kick-off, Des presents the BBC’s big preview. No dramatic video montage. No pulsating bassline. No outlandish hype or hullabaloo. Just Des and one of the great opening monologues you’ll ever see.

Scotland in the final? You sly old rascal.

Shouldn’t you be at work?

Whisper it quietly, but England are actually good. Eight months earlier, on a tumultuous night in Rome, the Three Lions had sealed World Cup qualification with a composed performance that saw them secure a 0-0 draw with rivals Italy.

But there’s a problem. The fixture list shows England’s opening game against Tunisia is bang, smack in the middle of a Monday afternoon. Those bastards at FIFA have stitched us up again.

Maybe one day we’ll get our sovereignty back and arrange our own World Cup fixtures. Until then, we’re in trouble. It’s a mad dash towards kick-off as everyone works out their gameplan – whether that’s annual leave or some good old-fashioned bunking off.

When the broadcast begins, Des has got a killer line to welcome us to proceedings.

A titan of broadcasting turns 76 today. The moustachioed master of the one-liner, his silky smooth voice was the soundtrack of sport.

Happy Birthday Des. Thanks for the memories.pic.twitter.com/VUF3D4zTFs

Oh what might have been. England, brave England are out of the World Cup on penalties. Of course they are. You didn’t need to be Eileen Drewery to predict that particular set of circumstances.

It’s been a rollercoaster ride through France. An entire nation bunked off work to watch the opening game. Beckham’s free-kick against Colombia made him a hero. His petulance against Argentina made him a zero.

And then there’s young Michael Owen, who’s stolen the heart of a nation with his lightning-quick solo runs and his willingness to go down in the box under the merest of contact. Bless him.

Now it’s all over. Another four years of hurt. Glenn Hoddle sat on the touchline wondering what sins he’d committed in a previous life to deserve this heartache. It’s tough to say. But in this timeline asking David Batty to take a penalty was a fairly fucking obvious starting point.

Now it’s left to Des to sum it all up, which he does in the exceedingly good prose of Rudyard Kipling. The public reaction to this was so great that the BBC actually agreed to release it on CD. You can still buy a copy on eBay today for £2.99. You know what to do.