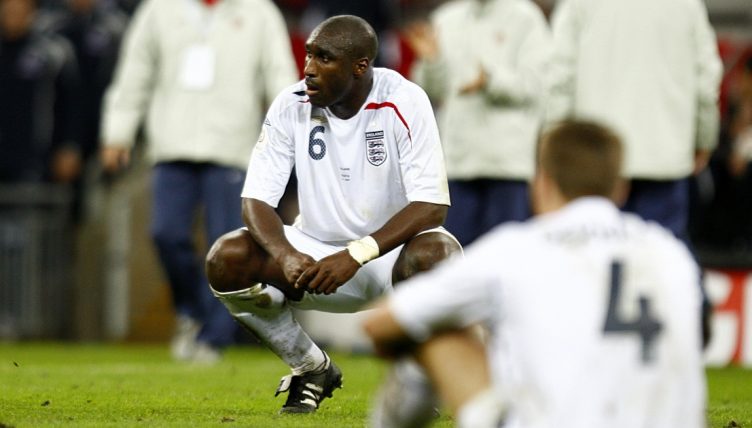 When we remember England’s defeat to Croatia in 2007, it’s hard to look past the result. But to do so would be to ignore a memorable moment from Sol Campbell’s career.

With the hosts 2-0 down inside half an hour and staring a summer without tournament football in the face, someone needed to step up and provide a distraction.

Thankfully for the Three Lions, at least for a little while, Sol Campbell was there to help his country when it mattered.

Things had died down a little after Niko Kranjcar’s speculative strike and Ivica Olic’s finish had stunned the Wembley crowd. However, simply stopping Croatia from scoring again wasn’t going to be enough.

England needed to get their energy back, and they needed someone to take the bull by the horns if that was going to happen.

The conditions probably didn’t help, with the miserable rainy evening – immortalised by the sight of Steve McClaren standing pitch-side with an umbrella – providing a kind of pathetic fallacy for the night’s events.

But if you know the slick pitch and the opening heavens are going to take a leading role, you might as well use that to your advantage… or at least try to.

And so, with Olic closing by the corner flag, Campbell did this…

Campbell had already walked out on Arsenal mid-match more than a year before the Croatia game before returning to his best with Portsmouth, and the brilliance of that stage in his career came from the fact that you couldn’t tell what you were going to get from him.

This could sometimes bring mistakes from nothing, sure, but it also meant he was never likely to let his surroundings affect him more than he was likely to be affected by his own internal distractions.

And so, with Olić an overwhelming favourite to reach the ball first, Campbell slid. Then he kept sliding. Then he kept sliding some more. Would it have been sensible to stop? Perhaps, but the logic required to do that is the same logic that would have prevented him from making the move to begin with.

Perhaps even more impressively, Campbell’s actions don’t even leave him out of the picture when Croatia are ready to take the resulting throw-in.

In theory, the distance covered should leave him high and dry by the time Kranjčar sends the ball back into play, but the extravagance of the slide means the midfielder’s own actions are slowed by the need to watch Campbell in full flight.

By the time he realises he has a throw-in to take, he’s been so busy staring in awe at the slide that England have lost nothing from it. And what a slide it is.

Campbell takes the form of a curler and the stone at once, sending himself along the surface and rolling to the perfect stop. It’s the sort of thing that can take years of practice, yet he makes it look entirely instinctive.

It’s a remarkable feat of control, so much so that we’re tempted to point to this recovery, rather than any of the interceptions or tackles from other points in his career, as evidence of the centre-back’s brilliance.

It says a lot that even the parody videos, those specifically designed to make Campbell’s actions look ridiculous, aren’t a patch on the real thing.

The 2007-08 season was a productive one for Sol Campbell, even if it wasn’t for England.

He led Portsmouth to the FA Cup final, in which they beat Cardiff City 1-0, and was part of a defence that conceded just 40 goals in the league and just one in six cup games.

Some will remember him for his part in the tense 1-0 cup victory against Manchester United, a game which ended with his fellow England defender Rio Ferdinand in goal at the other end of the field.

Others will look at the only goal he scored that season, an opener against Reading on New Year’s Day, or indeed the own goal he scored in the reverse fixture against the Royals as part of a ridiculous 7-4 win.

However, as far as we’re concerned, it’s hard to look past a slide which, if we didn’t have evidence to the contrary, we might think was still going.