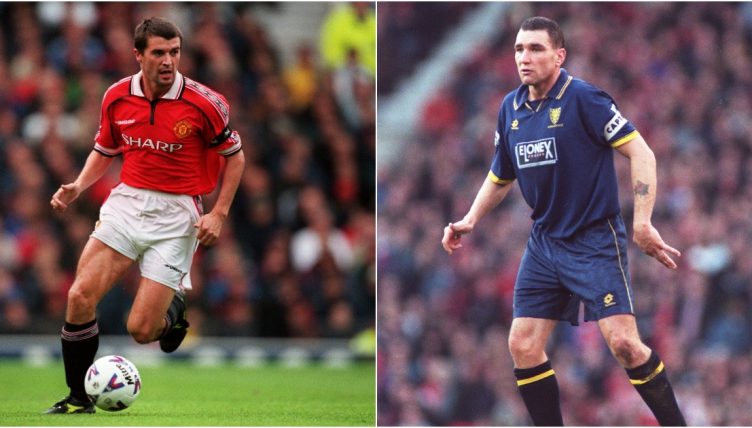 “It’s good to get angry,” former Manchester United captain Roy Keane once said. “It’s an emotion and part of the game. It’s good to go a bit mad but I don’t throw teacups around. That’s not my style – I’d rather throw punches.”

Throughout his illustrious career, Keane loved to intimidate his opponents with his no-nonsense and unapologetic style of play. From standing over an injured Alf-Inge Haaland to confronting Patrick Vieira in the Highbury tunnel, he often seemed to come out on top.

But that wasn’t always the case.

Back in February 1994, Keane was still in his first season at United following his move from Nottingham Forest. The midfielder had just started to assert his authority in games, bullying anyone that dared to stroll into his territory.

Like facing the final boss at the end of Super Mario, he now had to come up against Vinnie Jones in an FA Cup tie against Wimbledon. Part of the ‘Crazy Gang’ team that won the FA Cup in 1988, Jones had returned to Wimbledon for a second spell and certainly hadn’t mellowed.

He relished conflict and was renowned for his full-blooded approach to the game, often ensuring that his opponents lived off a diet of grapes and Lucozade for a few weeks after playing Wimbledon.

Vinnie Jones recieves the fastest booking in English football, as he clattered into an opponent after 3 seconds. pic.twitter.com/WvYWal9raX

When you look up ‘tough guy’ in the dictionary, you’ll see Jones’ face snarling back at you. He had even angered the FA by releasing a Christmas video entitled ‘Soccer’s Hard Men’ in 1992.

“The FA have given me a pat on the back,” Jones said after being fined £20,000 and receiving a suspended six-month ban from all football. “I’ve taken violence off the terraces and onto the pitch.”

While Jones was widely regarded as the hardest bastard in British football, Keane was still the young pretender at this stage, hoping to ultimately overthrow him.

Jones made his presence known during the early stages at Selhurst Park, barging into Keane with a tackle that was later than a London bus.

It temporarily left Keane in a heap on the floor, but this foul was a warm embrace compared to what was to follow.

Keane attempted to hit back, only for Jones to leap off the floor and headbutt him in the crown jewels. Considering what Jones did to Paul Gascoigne in 1987, Keane might actually consider himself a bit fortunate.

Vinnie Jones attempting to headbutt Roy Keane in the family jewels will wake you up this Saturday morning. 👀 pic.twitter.com/UrclJwYtuc

A year before Eric Cantona’s infamous karate kick on a Crystal Palace fan, the Wimbledon star decided to showcase his own martial art skills at the same stadium.

Within the first 20 minutes, Jones lunged at Cantona with a horrendous knee-high challenge that would even make Nigel de Jong flinch.

The United players, who probably felt that they needed some police protection, immediately ran over to help their team-mate and complain to the referee.

After nearly being cut in half, Cantona initially looked set to confront Jones before coming to his senses and walking away.

While a tackle like that would probably lead to a life-long ban these days, Jones remarkably remained on the pitch and was shown a yellow card by the referee. It’s pretty safe to assume that VAR would have intervened if this had happened during the 2020-21 season.

Like a misbehaving schoolboy, the midfielder refused to learn his lesson and crashed into Paul Parker before receiving his final warning. There’s walking on thin ice and then there’s driving a truck over it.

Flashback to Feb 1994, and Vinnie Jones is on a mission during Wimbledon’s FA Cup 5th round tie against Man Utd.

Here, he takes out Eric Cantona with an appalling high tackle, before running straight through Paul Parker in a mad couple of minutes.

Having lost the physical battle, Keane and his United team-mates decided to let their football do the talking. On the brink of half-time, Cantona set himself up with a brilliant first touch before firing a stunning half-volley past the goalkeeper. A moment of magic amid the mayhem.

Keane began to hold his own in midfield during the second half, knowing that Jones simply couldn’t afford to make another risky challenge.

The former Republic of Ireland international also proved that he was far more than just a tough guy, producing a stunning pass that picked out Ryan Giggs, who could only hit his effort straight at the Wimbledon goalkeeper.

United continued to dominate possession and doubled their lead when Paul Ince headed Giggs’ corner into the back of the net.

The travelling Reds began to chant ‘ole’ with every successful pass, irritating Jones who was left chasing shadows in the middle of the park. The fact that he stayed on the pitch for a full 90 minutes is nothing short of a miracle.

Denis Irwin then drove forward and exchanged passes with Ince before finding the bottom corner, rubbing salt into Wimbledon’s wounds.

While the United team were left with more than a few bruises, they refused to be intimidated and progressed to the FA Cup quarter-finals.

Today is the 25th anniversary of this Eric Cantona volley vs Wimbledon.

Jones had a few more encounters with Keane before his retirement in 1999 but felt that the former Republic of Ireland international was never able to bully him.

“If you’re talking hard nuts, give me ‘Big Bad Billy’ Whitehurst over Roy Keane any day,” Jones wrote in an EasyOdds column in 2020. “On and off the pitch, Billy was different class.

“To be honest Roy didn’t make a lot of noise when I played him – I don’t really remember a tackle. A fantastic footballer, yes, and a man I like and respect, but I’d have him well below Billy in the pecking order, and below Steve McMahon and Bryan Robson too.”

While Keane probably won’t admit it, his battles with Jones seemingly inspired him to turn things up a notch during the late 1990s,

He embraced his dark side and cemented his status as football’s next big baddie, eventually equalling Jones’ total of seven Premier League red cards.

Keane’s battles with Vieira came to define the Premier League era but they arguably wouldn’t have been possible without his apprenticeship under Jones.