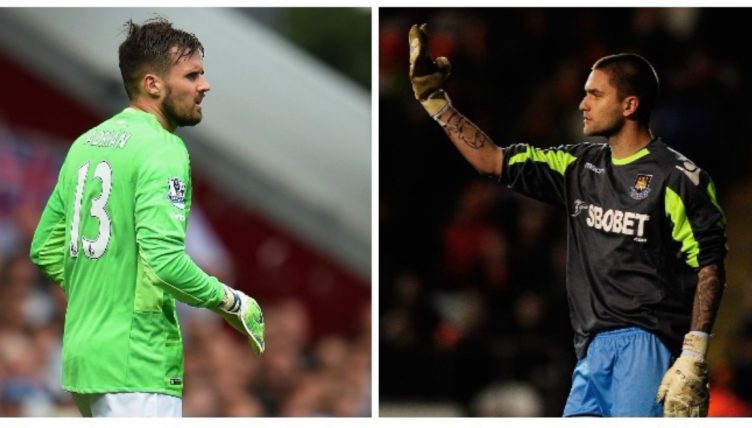 Carl Jenkinson spent two seasons on loan at West Ham United between 2014 and 2016, yet the former Arsenal full-back is undoubtedly best remembered in East London for the few minutes he spent doing nothing much.

Somehow, Carl Jenkinson feels both older and younger than he actually is.

It was way back in 2011 when he scored that comedy own goal in pre-season for Arsenal – at the time, Alex Iwobi and Ainsley Maitland-Niles were still in their early teens – and Jenkinson has crammed a lot in for someone still occasionally talked about with words like ‘potential’.

Including a couple of minutes in goal.

They came in the second game of the 2015-16 season, in what was a routine counter-attacking away win for Leicester City until one major talking point late on when Jenkinson went from just another full-back bamboozled by Riyad Mahrez to something very different.

How many times have you seen a goalkeeper sent off for attempting an overhead kick just outside the opposition penalty area? Probably not too many, right?

Well, Adrian, up for a late corner, did just that. And with all three subs already on the pitch, Jenkinson was the man to don the Spaniard’s gloves for the remainder of the match.

To this day, it’s unclear what made Jenkinson the ideal candidate to go in goal.

Perhaps it was his height, or his relative lack of attacking prowess in a top-heavy side. Maybe it was as simple as him being stood closest to Adrian and time running out as the hosts chased an equaliser.

Either way, Jenkinson ended up as the archetype of the outfielder thrown into this unfamiliar role.

Certain behaviour is expected of an outfield player thrown in goal, in much the same way as goalscorers are seemingly taught certain stock phrases to use when stuck during interviews.

You need to look sheepish while donning the gloves, while you better not throw on the keeper’s shorts as well as their jersey – that off-putting contrast, top half keeper, bottom half ball-player, feels like an unwritten rule regardless of the time of the game when the positional shift is made.

You need an embarrassed smirk on your face to begin with, especially if you turn towards your own supporters. Strangely, the reaction is akin to a fan winning a competition to play up front for the club, even though this is, in the grand scheme of things, probably the last thing you wanted to happen.

Like a number 11 batsman who scores a couple of runs and gets ideas above his station, the pinnacle of the genre in football is the player who considers himself a professional outfielder-in-goal.

And as it happens, West Ham had one of those on loan from Arsenal too.

Well, to call Henri Lansbury a pro might be an exaggeration, but the midfielder had enough form in the position to convince Allardyce to use him as West Ham’s No.2 keeper for part of the Irons’ 2011-12 promotion campaign.

Playing for England’s Under-21s against Turkey in 2010, he stepped up to the plate after Jason Steele’s red card, immediately conceding the resulting penalty from Cenk Tosun but standing firm for the remaining half-hour.

As such, he must be one of only a select few England keepers to remain forever unbeaten from open play, even if his effort for Tosun’s spot-kick leaves a bit to be desired.

While confidence is a big part of goalkeeping, no one said it ever needed to be justified confidence.

And it feels like that belief was contagious, prompting Allardyce to regularly make do without a goalkeeper on the bench, safe in the knowledge he could call upon his midfielder-slash-goalkeeper if needed.

That’s how West Ham ended up going into a New Year’s Eve trip to Derby with a five-man bench comprised of five forwards, and how – just a few weeks later – Lansbury was brought off the bench to go in goal when Rob Green was sent off with the visitors 2-1 up at Blackpool.

On this day in 2012 West Ham beat Blackpool 4-1 at Bloomfield Road. Robert Green was sent off so Henri Lansbury had to go in goal with the game at 2-1 pic.twitter.com/1co07ljxl4

It’s a bluff worthy of Louis van Gaal at the 2014 World Cup – if you make it look deliberate, like this was always your plan in such a situation, it doesn’t matter whether it’s genuinely what you intended.

Of course, there’s still the unwritten shorts rule, and Lansbury entered the field with a keeper’s jersey over a full outfielder’s kit, but you need to leave a small element of doubt in these situations.

Two more goals followed…but not at the end you might have expected. Lansbury wasn’t going to give up that ‘unbeaten from open play’ crown lightly, after all. And no, of course it doesn’t matter if you’ve faced no shots on target in that time.

Don’t be too good

Oh, and speaking of ‘unbeaten from open play’, it would be remiss to go all this way and not mention John O’Shea’s cameo between the sticks for Manchester United against Tottenham in 2007.

On this day in 2007, John O'Shea made his goalkeeping debut for #MUFC…

He did a pretty good job, too! 👐 pic.twitter.com/tNIc6Ogsjn

O’Shea almost defeats the point, however.

Yes, a makeshift goalkeeper needs to show undue confidence in their own abilities, and needs to front up despite there being no evidence he’s justified or even qualified to do so, but that all goes up in smoke when they then resort to moments of competence such as claiming crosses and even saving shots.

As an outfielder in goal you need that counter-intuitive blend of sheepishness and overconfidence, but your real role should be as a scarecrow, not an actual keeper.

Any more than that and people will start to ask questions.

One-Game Wonder: From playing for West Ham to playing with Stevie Wonder