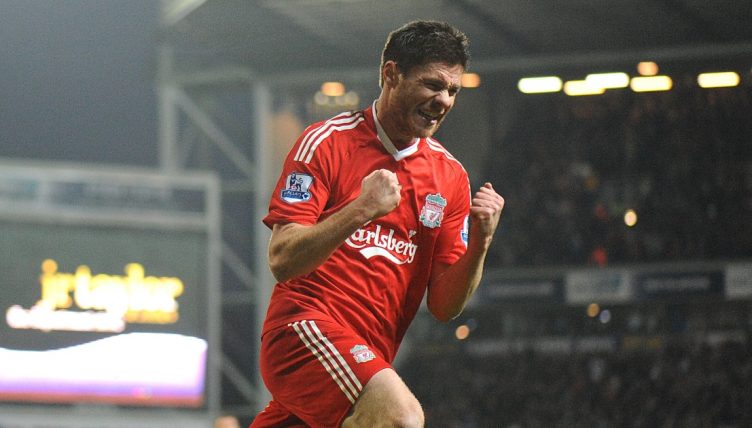 In an ideal world, Xabi Alonso would never have scored a single goal in his 18-year career as a professional footballer.

Alonso’s style of play was far too pure for the quest of putting the ball into the back of the net.

Instead, he should have stood magisterially in the centre circle – hair remaining perfectly styled, stubble remaining the perfect length – spraying cross-field passes with the lazy precision of a Roger Federer drop shot, refusing to break into anything more than a canter.

That’s the life we like to imagine Alonso lived during his playing days at Real Sociedad, Liverpool, Real Madrid and Bayern Munich. It’s the life we all like to imagine ourselves living as a professional footballer; the ethereal playmaker at the heartbeat of the side, a class above mere mortals, the type of player people pay to sit back and watch.

Sadly, elite football is not a world for idealists, and so Alonso did occasionally have to break sweat. Sometimes he couldn’t always be part of the move that created a goal. Sometimes the best way for the ball to find the back of the net was for the midfielder to put it there himself.

Thankfully, Alonso managed to bring the same aesthetic beauty to that as he did every other aspect of his game. Why he doesn’t get more credit for doing so remains a mystery.

Sixty goals for club and country is nothing to be sniffed at for a deep-lying midfielder, but it’s the quality rather than the quantity of Alonso’s goals that stands out.

Only 10 of those goals came while he was still learning his trade at boyhood club Real Sociedad. Given the responsibility of captaining the side out of a relegation battle at the age of 20, at times he appeared to still be playing on the beaches of San Sebastian, where he practised alongside childhood friend Mikel Arteta.

“We practised passing a lot,” Alonso told Liverpool’s official website in 2008. “I guess that’s where we learned to be midfielders. Our games were about passing the ball, not so much kicking it at the goal.”

When the opportunity to kick the ball towards the goal from 25 yards out presented itself in a 2003 La Liga fixture against the Galacticos of Real Madrid, Alonso could calmly pass it into the corner instead.

Los Blancos tried to sign Alonso later that season, but they had to wait another six years before the Spaniard finally graced the Bernabeu as one of their own.

Whenever possible, Alonso shot with the instep of his boot rather than the laces; at Liverpool, that became even more noticeable while being deployed alongside the far more explosive Steven Gerrard.

We all know about the goals from his own half against Luton Town and Newcastle United. The latter in particular highlighted the preternatural vision Alonso inherited from his father, Periko, who was the axis of Real Sociedad’s greatest ever side, winning the club’s only La Liga titles in 1981 and 1982.

But those efforts overshadowed some of Alonso’s more sumptuous strikes while in England. His second goal for the Reds came via a role reversal with Gerrard, who played a cute inside pass to allow the on-rushing Alonso to direct the ball straight into the top corner against Arsenal. Given Neil Mellor’s late heroics to secure a 2-1 victory, this could go down as one of Anfield’s great forgotten goals.

Likewise, his goal against Watford the following season failed to live long in the memory as it came in the 88th minute of a dour 2-0 victory against a dour Hornets side that propped up the Premier League.

Yet again, however, it was Alonso at his most attractive, arcing the ball over Ben Foster with an insouciant swing of his right boot.

It’s easy to see why Gerrard said the departure of Alonso to Real Madrid “broke my heart”, but his goalscoring output suffered after moving to the Bernabeu, netting just six times in 236 games and failing to score at all in his final two campaigns with Los Blancos.

In fairness, playing under Jose Mourinho for the majority of his time in the Spanish capital was hardly going to encourage a player in Alonso’s role to stray too far away from in front of the back four.

With chances few and far between, he eventually decided to break his own rules against Real Zaragoza in 2011. The grace and poise were still there, but he eschewed his instep for the outside his boot to carefully place the ball into the bottom corner from long range.

Under Pep Guardiola at Bayern Munich, Alonso’s output unsurprisingly picked up, as he scored more goals in fewer than half the appearances he made with Real Madrid.

By this point he had nothing left to prove, and with Guardiola as his manager, he had the licence to express himself, allowing Alonso to carve out two curious niches.

No longer having to compete with Cristiano Ronaldo on free-kick duty, he became the master of cheekily passing the ball under the wall and past confused goalkeepers who had almost definitely had enough of this shit.

After 15 years of keeping calm and composed, it was time to let his instincts get the better of him, and he also perfected a one-touch, dipping half-volley that was clearly signposted: “Fuck this, I’m leathering it.”

There are lots of reasons to love Xabi Alonso. Sure, he’s devilishly handsome. Sure, few players could pass as gracefully as he could. But he could also score like the best of them too.

It’s time we all start to remember that.

READ NEXT: Pako Ayestaran: These four ‘special’ players stood out to me at Liverpool