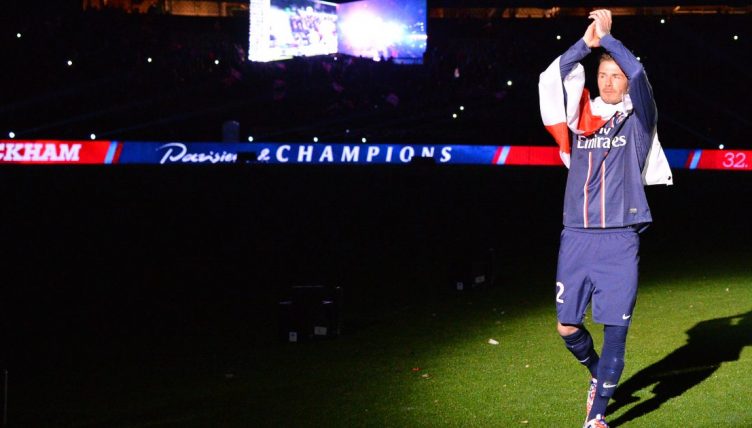 David Beckham’s late career often felt like a farewell tour. At PSG, however, the midfielder was starting key Champions League games at the age of 37.

In some ways, almost one third of David Beckham’s career was a swan song — an extended encore packed with gentle crowd-pleasers, a victory lap in which the England hero jogged from one fashionable city to another, revelling in the applause while conspicuously morphing from footballer to superstar.

Beckham actually won five trophies after leaving Real Madrid. To the casual observer, though, none of them really mattered. None carried the weight of a Premier League, La Liga or Champions League victory.

In essence, Beckham retired in slow motion. Five and a half seasons with the LA Galaxy and two loan spells at AC Milan formed part of an elongated coda, and it was at Paris Saint-Germain where he finally, at the age of 38, drew his career to a close.

Alongside Zlatan Ibrahimovic, Thiago Silva and Mamadou Sakho, he collected his final piece of silverware. In the shadow of the Eiffel Tower, he whipped in his final series of corners and free-kicks.

In the latter half of the 2012-13 season, PSG gave Beckham his last appearance in football.

And despite the theatrics of it all, despite the legions of PR executives that pieced the move together, despite the midfielder’s endless probing for a knighthood, the French side were actually the perfect hosts.

Beckham’s swan song was as beautiful as the man himself.

If it’s better to burn out than fade away, then David Beckham showed that a gentle easing out of the limelight can also be dignified — moving, even.

Because rather than come to an abrupt stop, Beckham’s career effectively wrapped up in stages, occasionally going back on itself, finally drawing to a close when many fans were already heading for the exits.

You might reach as far back as 2007 to identify the end of Beckham’s career proper.

That was the year in which the England star moved from Madrid to LA, cementing his status as one of the world’s most important athletes but, at the same time, signalling that his physical footballing talents would henceforth take a secondary role.

Two loan spells at AC Milan, however, blurred the line between the serious part of Beckham’s career and the more fanciful.

Determined to prove his ability — mainly to England boss Fabio Capello — he took his time in Italy seriously, joining for a half-season in consecutive years.

Multiple managers tried and failed to ease him out of the fold, and it was only an unfortunate injury that kept the midfielder out of a last World Cup finals at the age of 35.

Even beyond that point, Beckham refused to retire and even rejected the offer of a ‘farewell’ friendly. He remained in limbo, there and not there.

The Englishman was every bit the anti-Zidane. Where Zizou quit the game prematurely and with the greatest possible bombast, Beckham, his former Madrid team-mate, eased his way out, piece by piece.

At PSG, Beckham was given the chance to bow out definitively, on his own terms.

After being linked with numerous clubs in January 2013, he signed for the French league leaders on the 31st, reuniting with Carlo Ancelotti, who had managed Milan during Beckham’s first loan there.

“I don’t know if this will be my last contract,” he said.

He did reveal, however, that the entirety of his wages — described as “a very good figure” — would be donated to a children’s charity in Paris. Beckham would play for free for the duration of his stay. 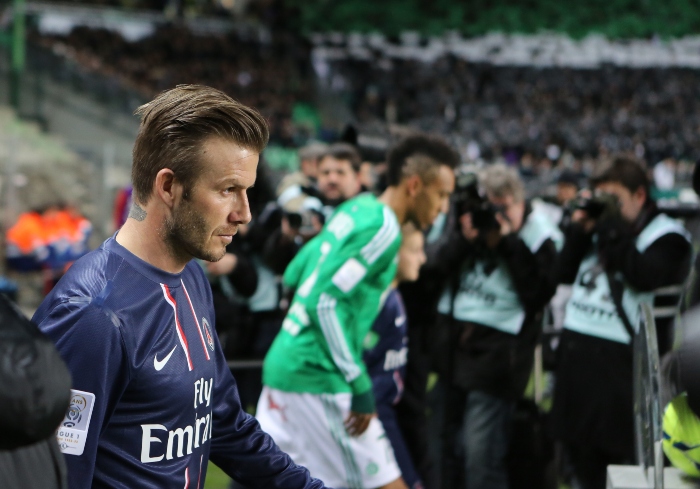 Time, unfortunately, has not been kind to that particular gesture.

After Beckham announced his forthcoming retirement a few months after joining PSG, the free-kick specialist was widely expected to receive a knighthood later that year — in part thanks to his commitment to the 2012 Olympic Games and long-time charity work.

He was ultimately snubbed.

Worse still, hacked emails that were leaked years later revealed the extent to which the footballer had, through such charity work, been actively been seeking a knighthood. Upon his snub in 2013, he had called the Honours Committee “unappreciative c*nts”.

Nonetheless, the Paris children received their cash from PSG as Beckham played for nothing.

There may have been little altruism behind the gesture, but in a sport where Juan Mata struggles to extract a measly 1% donation from his fellow professionals, Beckham’s generosity remains unmatched.

In 14 appearances for PSG, Beckham played mostly in central midfield, mostly from the bench. In his 10 league appearances, he lost only once, allowing PSG to ease to their first title in 19 years.

There was, of course, an element of exhibitionism about these matches.

In seven of his 10 league appearances, Beckham played less than half an hour. And in the league-clinching 1-0 victory over Lyon, he was subbed on in the third minute of second-half stoppage time, allowing him to join the celebrations.

Had you caught only that particular moment of Beckham’s PSG career, you’d have been forgiven for your inevitable cynicism: was the midfielder playing for PSG, or were PSG simply advertising their brand, with Beckham their very handsome new mascot?

In the Champions League, when PSG faced Barcelona in the quarter-finals, the answer was provided.

During the home leg, Beckham was preferred to Marco Verratti in the middle, much to the surprise of onlookers. Barca dominated the opening stages, but PSG eventually settled down, with the ageing Beckham looking comfortable and classy.

PSG eventually lost on away goals, but Beckham’s appearance, at 37, in such a key tie, was testament to his incredible ability and, just as importantly, a stamp of authenticity on his four-month stint in Paris.

Over those four months, Beckham even had time for a couple of trademark assists: one chipped cross to Zlatan Ibrahimovic versus Stade Rennais, and another, even more typical of the midfielder, in his last ever match.

The last match was… emotional.

Wearing the captain’s armband, Beckham, now 38, set up PSG’s second goal with a trademark corner after half an hour.

And five minutes later, he did something even more Beckhamesque.

Standing over a direct free-kick, cameras focused on his face, Beckham huffed, puffed and… relinquished shooting duties to Zlatan Ibrahimovic — who scored.

It was probably a more charitable act than the donation of his wages.

As a tearful Beckham left the field late in the game, he drew his long career to a close. It had been a fittingly melodic swan song: charitable, competitive and ultimately victorious.