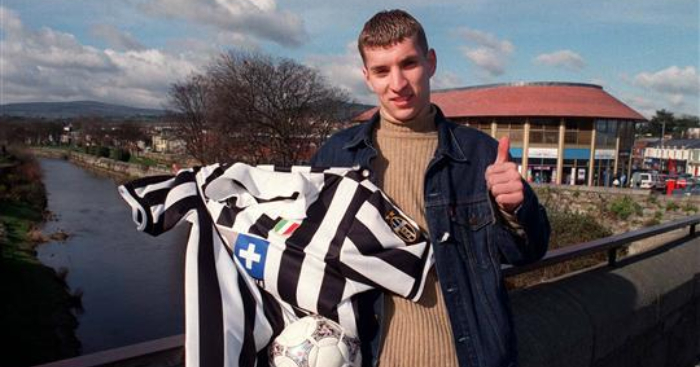 By the summer of 1999, both Middlesbrough and Ronnie O’Brien agreed he had no long-term future at the club.

O’Brien was just 20 at the time but had yet to play for the first team. By his own admission: “Things were going nowhere at Boro.”

With little prospect of playing under manager Bryan Robson, O’Brien decided he would not sign a new contract at the cub should one be offered. Regardless, the decision was taken out of his hands and he was released at the end of the 1998-99 season.

Having been stacking supermarket shelves just four years earlier, O’Brien was still hopeful of a career in professional football. When agent Steve Kutner got in touch to inform him of a potential move to Italy, the midfielder was open to an adventure in the lower leagues abroad.

Kutner had been given positive feedback on O’Brien from one of this most high-profile clients, Paul Merson, who had been impressed by the youngster in Middlesbrough training. Juve liked what they saw after watching him play for Boro’s reserves and the Republic of Ireland’s youth sides.

Shortly after being deemed not good enough for Boro, O’Brien signed a five-year, £3,000-a-week deal with the Old Lady of Italian football, prompting comparisons to Liam Brady and criticism of Robson’s reluctance to give young players an opportunity in the North East.

“People jump to the ceiling because he has gone to Juventus, but he hasn’t done anything yet,” Robson hit back.

O’Brien’s move was part of a bizarre youth recruitment drive by Juventus. Looking back, it was almost like a prototype Chelsea, just replace Gael Kakuta, Michael Woods and Tom Taiwo with Ronnie O’Brien, Vincent Pericard and Matteo Brighi. (Pericard’s Juve career came to an end after trying to chat up the vice-president’s daughter.)

He was immediately given more first-team exposure by Carlo Ancelotti than he had by Robson, appearing on the bench for the summer’s Intertoto Cup fixtures. He even made a 13-minute cameo in a 5-1 win over Rostov, sharing a pitch with the likes of Alessandro Del Piero, Filippo Inzaghi and Edgar Davids.

Among his other contemporaries, he roomed with Antonio Conte and was so moved by watching Zinedine Zidane in training he later named one of his children in Zidane’s honour.

But that appearance against Rostov proved to be the full extent of his first-team experience with Juve. Loan moves were arranged to Swiss outfit Lugano and lower-league Italian sides Crotone and Lecco. A spell closer to home with Dundee United similarly underwhelmed.

O’Brien was eventually released three years into his five-year deal with Juventus, which allowed him to finally find a permanent home with a move to Dallas Burn – now known as FC Dallas, presumably because Dallas Burn sounds like a STI – in MLS.

Quickly becoming a firm favourite at Dallas, O’Brien was named in MLS’ Best XI twice and appeared for the All-Stars four times during his time in North America, which wound down with spells at Toronto and San Jose Earthquakes.

A member of the Republic of Ireland’s Under-16 squad which won the 1998 European Championships alongside the likes of John O’Shea, Andy Reid and Liam Miller, O’Brien’s MLS form was impressive enough to be finally sounded out for a senior call-up by Steve Staunton in 2007, but he turned it down having only just returned from an injury.

Since retiring, his remarkable life has continued, becoming a pro golfer, but the most extraordinary episode came back in that same summer of 1999 when he swapped Teeside for Turin.

As the end of the century drew closer, the prestigious American magazine Time ran an online poll to determine the ‘Person of the Century’. Martin Luther King and Elvis Presley were among the early frontrunners from a 100-strong shortlist of candidates that also included Mother Teresa and Winston Churchill.

Crucially, the poll also had an option for users to submit their own nominations. O’Brien’s name made its way into the options and before long, in a precursor to Boaty McBoatface, led the poll ahead of Martin Luther King, Mother Teresa and co.

O’Brien’s ascent saw Time remove his name and change the rules: “Whimsical candidates and others who were not alive during this century, or do not fall within the spirit of the title, will not be counted.”

Another year of disappointment for Ronnie O'Brien https://t.co/aXzPqJlqCI

A spokeswomen for the publication rather jovially added: “This was just a bit of fun, even if he is an obscure footballer, and we’re not at all miffed.”

Even Middlesbrough commented on the surprise popularity of the player they had just released: “It didn’t work out for Ronnie here but we wish him all the best for the rest of his career, though we think he’s still got something to prove before he can claim to be personality of the century.”

Given the year Ronnie O’Brien had just had, we’d still vote for him now quite frankly.

Jonathan Franks discusses breaking through at Boro & ending up in Iceland