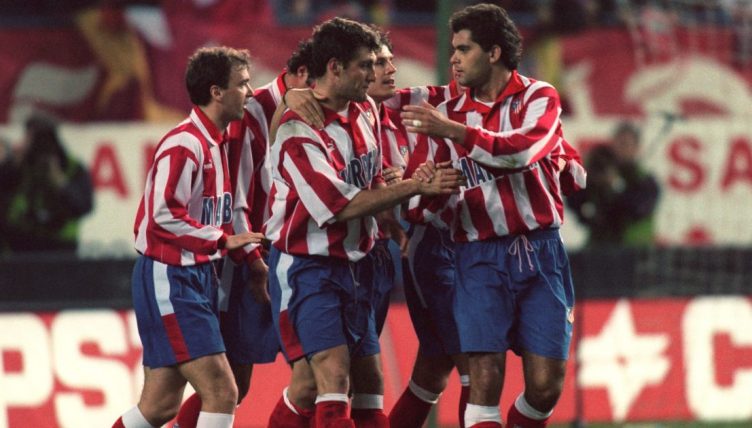 In the summer of 1997, Christian ‘Bobo’ Vieri left Juventus, who had just won Serie A and reached the Champions League final, to sign for Atletico Madrid, who had just finished fifth in La Liga. It surprised plenty.

Juventus represented one of Italy’s established elite and, under Marcelo Lippi, were enjoying an era of unprecedented success.

Atletico Madrid, meanwhile, too often veered from triumphant to tragic having only narrowly avoided relegation from La Liga in 1995 only to win a La Liga and Copa del Rey Double a year later.

After finishing fifth and 21 points off leaders Real Madrid the previous season in 1996-97, notorious club president Jesús Gil was determined to take action. Together with manager Radomir Antic, the pair identified Christian Vieri and Middlesbrough’s Juninho as key summer targets.

But while Boro’s Premier League relegation made any deal for Juninho relatively straightforward, Vieri was a different story.

Indeed, an initial bid of £9million was immediately rebuffed by Juventus owner Gianni Agnelli, who declared: “Like Brigitte Nielsen, he’s not on the market.”

And there was good reason for Agnelli to not want to sell.

The bull with a butterfly’s step

Signed from Atalanta a year earlier, where he had scored nine goals in 21 Serie A games, Vieri had come into his own for the Old Lady during the key final stages of the season, scoring 10 goals in 16 games in the absence of the injured Alen Boksic and Alessandro Del Piero to help Juve clinch the Scudetto and reach another Champions League final.

He scored home and away to Ajax in the European Cup semi-finals, while La Republica dubbed him “the bull with a butterfly’s step” after he scored twice in a 6-1 demolition of AC Milan at the San Siro in which he ran Franco Baresi ragged.

As far as Juventus and Lippi were concerned, Vieri was going nowhere.

But Atletico weren’t about to give up. “I want him and him alone,” Antic said, adding for dramatic effect: “Vieri dead is better than any other attacker alive.”

Atletico returned with an improved £12.5million offer – a hefty transfer fee for the time – and Juventus began to waver. By this time, the club had already signed Filippo Inzaghi to replace Alen Boksic while Nicola Amoruso was also on hand as cover.

The Juventus hierarchy decided to put the proposal to Vieri and let him decide for himself. It proved an easier decision than expected.

“One day [Luciano] Moggi called me into his office with my agent, Bettega,” Vieri recalled in his autobiography.

“Moggi claimed that the club could not offer me more than two million lira per season whilst I was aware that Atletico were prepared to offer 3.5 million lira. I said to them immediately, ‘I’m off to Spain,’ and that was the end of the meeting.”

“I admit that the motivation for this move was purely economic,” Vieri added. “If I could have turned back time, I’d have stayed in Turin.”

Vieri went on to clarify his comments in an interview with Marca: “I have nothing against Atletico, never. I do not regret having gone to Atletico.”

“We had a great team and Madrid was a wonderful city,” he added. “Signing for Atletico was the first important contract of my career, it was a challenge at that moment in all respects, and I could not say no.”

Signing for Atletico represented a win-win for Vieri, who would not only benefit from a pay rise but also a clearer path to first-team football in what was a World Cup year.

Lippi, who had a strong bond with Vieri, vehemently opposed the deal but was placated somewhat by the arrival of striker Daniel Fonseca, whom he had worked with at Napoli.

Vieri was heading for Atletico and a season that would make his career.

There was a noticeable lack of defensive reinforcements, though, with the club most significantly failing to replace the talismanic Diego Simeone, who had joined Inter Milan.

However, any initial concerns were quelled by a 1-1 opening day draw with Real Madrid at the Bernabeu, where a debut goal from Juninho helped end a run of seven straight league defeats to Los Blancos. But Atleti fans would have to wait for a Bobo goal.

In fact, Vieri wouldn’t get off the mark for Atleti until a UEFA Cup tie with Leicester City, scoring via a highly debatable penalty in a 2-1 win that had Foxes manager Martin O’Neill fuming.

It mattered little to Vieri. Finally off the mark, that hefty summer price tag began to feel a little lighter and everything began to fall into place. Eleven days later, a brace against Celta Vigo got him up and running in La Liga – and this was when the fun really began.

A run of three straight league victories followed, with Vieri hitting his stride in devastating form with goals in each.

The culmination came against Real Zaragoza, where the Italian’s intoxicating mix of speed, strength and skill combined for a superb hat-trick and 5-1 away win that moved Atlético up to third, having previously been as low at 10th.

Vieri had arrived and he knew it. A few days later, a UEFA Cup encounter with PAOK saw the Italian seal his status as the fans’ new hero.

Knowing his friend and team-mate Futre enjoyed a close relationship with Gil, Vieri proposed the following: “You have to tell the president that if I score three goals in the cup, I expect a Ferrari 550 Maranello as a gift,” he told the Portuguese. Futre went to Gil and the agreement was made.

The next evening and with a brace to his name that night, Vieri’s crowning moment for Atletico arrived via a goal he still ranks as his “most beautiful”.

Chasing down an overhit pass with PAOK goalkeeper Nikolaos Michopoulos also attempting to shepherd the ball out for a goal kick, Vieri achieved the almost impossible, reaching the byline in time to stop the ball dead before instinctively swivelling 270 degrees and scoring from a seemingly impossible angle over the stricken keeper.

“That goal has a small secret,” he told Gazzetta dello Sport after the game. “Never give up. Never think that something cannot be reached.”

There was no denying it: Vieri was Europe’s hottest striker, with a tally of 12 goals in his first 10 games at the club. Later that same night, Vieri and Futre headed off to choose his Ferrari. The good times had arrived…but they wouldn’t last.

Playing in an era before breakthroughs in sports science helped reduce the number of injuries incurred in professional football, Vieri’s mix of strength and speed came at a cost to Atlético.

Just as Vieri had hit his stride, he found himself sidelined after limping off just eight minutes into a game against Compostela. He would play just 45 minutes of the club’s next eight league fixtures, with the Rojiblancos winning only twice in his absence.

Though the goals continued to flow when Vieri was fit, disaster struck in early February when a tackle from Celta Vigo’s Michel Salgado left team-mate and friend Juninho with a broken fibula that would rule him out for six months.

When Vieri paid tribute to Juninho after scoring against Bilbao a year later, it was clear the Italian knew the impact his absence would have.

Shorn of one of their best attacking talents, Atletico’s defensive woes also began to come to the fore. Vieri continued to score freely, adding another 10 to his tally over the club’s next eight league games, but Atleti won just twice during that run.

Coming a week after they had lost 2-1 to 18th placed Compostela, with Vieri on the scoresheet yet again, it was a result that left Bobo frustrated to say the least.

“I broke the dressing room. I broke everything in there,” he later reflected, speaking literally, not figuratively.

However, though fined and reprimanded for his actions, it was becoming clear that Vieri was far from the problem at Atleti.

Already out of the Copa del Rey and slipping down La Liga fast, Atletico’s final hopes of silverware came in the UEFA Cup and a semi-final showdown with Lazio. Vieri had scored five goals in the tournament, helping Atletico dispatch Aston Villa in the previous round to set up the semi-final meeting.

Yet Vieri found himself shackled by a superb Lazio defence, marshalled by Alessandro Nesta for much of the two games. Beaten 1-0 in Madrid, Atletico rallied at the Stadio Olimpico and came close to levelling things up.

Finding himself free from Nesta and cohorts Paolo Negro and Guerino Gottardi, Vieri put team-mate Jose Mari through on goal. Playing in the absence of Juninho, the inexperienced Spaniard fluffed the chance, finding the side netting only. Atleti lost.

There was still time for one last hurrah, with Atletico securing seventh and a UEFA Cup place courtesy of an impressive 5-2 win over champions Barcelona. Vieri scored twice, but the team’s frustrating mix of attacking prowess and defensive frailty was evident.

Those two goals saw Vieri reach 24 for the season, securing the Pichichi Award, five ahead of Rivaldo. They would also prove to be his last for the club.

A starter for Italy at that summer’s World Cup, Vieri scored five times for the Azzurri to emerge as one of Europe’s most in-demand strikers. Lazio eventually won the race to sign him, paying Atletico Madrid £17.5million for the forward who was eager to return home.

Vieri went from strength to strength at Lazio, winning the European Cup Winners’ Cup before moving on again a year later for a world record £32million fee to Inter Milan, where he reunited with Marcelo Lippi.

A tribute to Christian Vieri, a great striker who deserves a greater legacy