The curious case of Daniel Cordone at Newcastle United 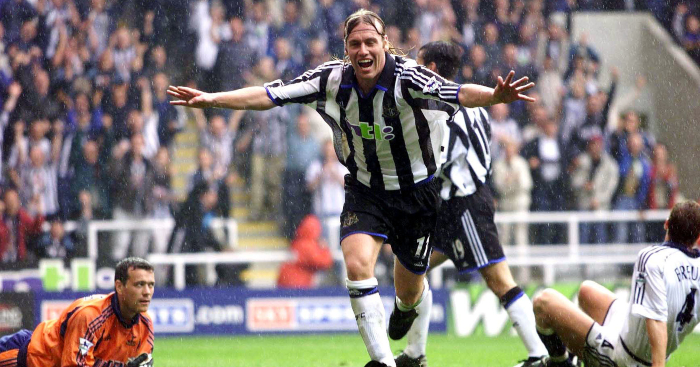 Sir Bobby Robson oversaw some brilliant transfers during his 36 years in management.

Ronaldo, John Wark and Ruud Van Nistelrooy were all plucked from relative obscurity before going on to enjoy stellar careers.

At Newcastle United, similarly savvy signings like Laurent Robert, Craig Bellamy and Jermaine Jenas helped the Toon re-establish themselves as ‘The Entertainers’ of old.

But it didn’t always go to plan – as the curious case of Carlos Daniel ‘Lobo’ Cordone demonstrates.

When discussing the worst Newcastle strikers of the 21st century, the Argentine often gets overlooked, perhaps because he arrived at the same time as £7million flop Carl Cort in June 2000.

Cordone, by comparison, was an absolute steal at £550,000 from Racing Club.

He didn’t have much in the way of goalscoring pedigree – 16 goals in 103 games for Velez Sarsfield and just four in 16 for Racing – and, at 26, he had yet to be capped by Argentina.

What he did have, however, was the endorsement of fellow Toon recruit Christian Bassedas.

A cultured sweeper with 22 Argentina caps to his name, Bassedas had played alongside Cordone at Velez Sarsfield, under Marcelo Bielsa among others, before arriving at St James’s Park for £3.5million.

With Newcastle eager to add an attacker to their ranks after Rangers hijacked a move for FC Copenhagen’s Petr Lovenkrands, Newcastle’s new golden boy offered up his compatriot as a possible option.

Quite what Cordone did to impress Newcastle scouts is unclear, but Robson was smitten, describing the goal-shy South American as a “pure attacker” in one BBC interview.

“He’s not going to defend very much for us and he’s not going to jump up against Sol Campbell and get his nose punched in trying to head a ball, and we have to understand that,” Robson said.

Newcastle fans had every reason to believe Sir Bobby’s summation – he was the man who brought Ronaldo to Barcelona after all.

Yet in the space of his first year at the club, Robson recruited a string of South American duds who fell into one of two categories: crap or entirely forgettable.

While the names Fumaca and Pablo Bonvin are likely to draw blank stares among some Toon fans, others like Bassedas and Diego Gavilan could well prompt stronger, more expletive-laden, responses.

Cordone was different though.

For one thing, he was anything but forgettable, thanks, in part, to a distinctive hairstyle.

A long, blonde, greasy barnet, better suited to the front man of a Guns ‘N’ Roses tribute act, Cordone capped it off with an alice band so ill-fitting you worried whether it was cutting off the oxygen to his brain. 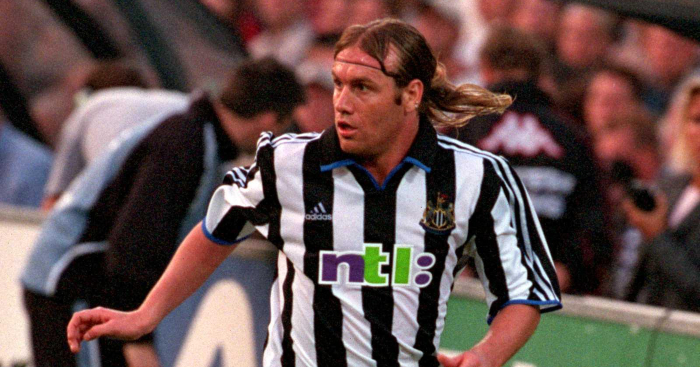 Then there was his unhealthy love of jewellery– a love so unhealthy, it required actual surgery to fix.

Lining up against Manchester United on his Premier League debut, Cordone ended up in the referee’s notebook before the game had even started thanks to a pair of Captain Jack Sparrow-like gold hooped earrings.

The problem wasn’t so much the fact he was wearing earrings – it was more the fact they were soldered onto his actual ear lobes, making them impossible to remove.

One stern telling-off from the FA later, Cordone found himself going under the knife to have them removed – all this and he’d only played one official game for the club.

Yet once the Argentine finally ditched the extravagant ear adornments something strange happened – he was actually, well, quite good.

Three days on from an anonymous debut against the reigning champions, Cordone proved the difference in a 3-2 win over Derby.

With the scores level at 1-1 early in the second half, the Argentine pounced on a weak clearance from Darryl Powell.

Shaping to shoot with his left, he sent the Derby defender one way before cutting inside onto his right and slotting the ball past Mart Poom to send the St James’ Park faithful into a frenzy.

The following Saturday, he was at it again, pouncing on a parry from goalkeeper Neil Sullivan to seal a 2-0 win over Tottenham in front of the Newcastle fans.

Speaking after the game, Robson seemed convinced he knew the secret behind Cordone’s sudden upturn in form – no earrings.

“It’s made him lighter,” he told the BBC. “He was carrying too much gold around with him – he’s put on half a yard of pace!”

Whatever the truth, with Alan Shearer enduring a slow start to the season – he was chasing his landmark 200th Premier League goal at the time and making heavy weather of it – Cordone was quickly emerging as a fan favourite.

It was hardly a surprise; the Toon faithful had been crying out for a South American Wildman ever since the departure of the mad-as-bats Tino Asprilla and this Axel Rose impersonator fit the bill.

Any warm feeling was reciprocated in spades by Cordone too, who spoke to the local Geordie press about how in awe he was of the St James’ Park support.

“I was told what to expect at Manchester United but I have been amazed that we got more than 50,000 for games against Derby and Spurs,” he told the Northern Echo. “I can’t believe the size of the stadium and the attendances we are getting.”

Indeed, Cordone seemed in awe of the Premier League in general, with team-mates recalling how he would take pictures of himself at every ground they visited, which could have been an endearing footnote, of course, had the goals continued to flow. But they didn’t.

Cordone added one more to his tally in early November – another close-range finish against strugglers Bradford City in the League Cup – and then, nothing.

Ever again, in fact.

It wasn’t for lack of trying. Time and time again, Cordone found himself in goalscoring positions only to fluff his lines at the crucial moment.

Football fans love a trier, someone who continues to give it their all despite an evident lack of success.

But, as in front of goal, Cordone’s timing couldn’t have been worse.

With Shearer and Cort sidelined for large spells of the season through injury, Cordone was thrust into the first-team time and time again when a spell out of the team might have arguably done him some good.

He went on to endure 18 fruitless league appearances before the return of the aforementioned pair saw the South American put out of his misery.

Cordone moved on to Argentinos Juniors a few months later with Robson learning a valuable lesson.

That summer, he opted against another bargain bin recruit, instead shelling out £6million on Craig Bellamy.

It would be five years before Newcastle signed another South American and, even then, it was the safest of safe bets, re-signing Nolberto Solano from Aston Villa.

Cordone, meanwhile, rediscovered his scoring touch with Argentinos Juniors, earning a move to San Lorenzo where, despite serving a three-month ban after testing positive for marijuana, he won the Copa Sudamericana in 2002.

The forward has been largely off the radar since hanging up his boots in 2007 – save for one bizarre appearance in a Masters friendly between former Brazil and Argentina greats in 2014.

Prior to kick-off, much had been made of the fact 50-cap World Cup star Claudio Canigga would be making an appearance.

But once the game began, it soon became evident that Canigga wasn’t Canigga at all. He was Cordone, albeit Cordone wearing a fake tattoo sleeve and a weird bandana.

Precisely no one was fooled. Most didn’t even know his stand-in used to be a footballer.

Cordone was booed off the pitch within the first 20 minutes.

There was international uproar and amusement. Refunds were requested. Cordone’s Newcastle stats were revisited with astonishment.

In fairness, Cordone might have gotten away with it if he had played or even looked a bit like Canigga.

Alas, he failed on both fronts.

Still, it wasn’t the first time he’d briefly impersonated an elite-level striker, was it?