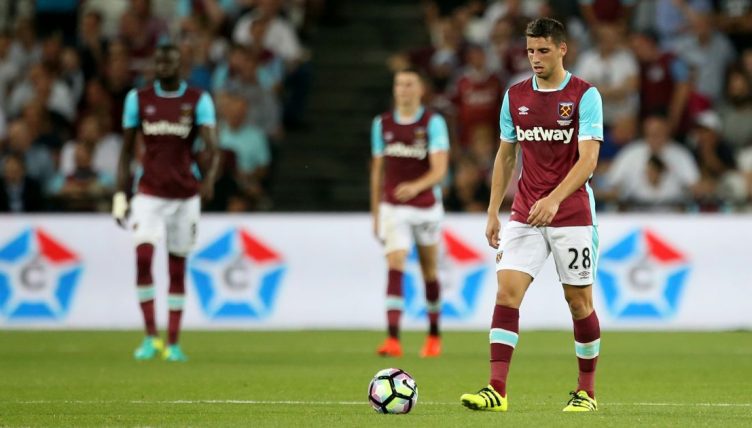 Prolific centre-forwards are to West Ham United what perspective is to Roy Keane – attainable, yet always somehow elusive.

Under the ownership of David Gold and David Sullivan, West Ham have purchased more than 50 forward players with varying degrees of disaster. A significant amount of churn has taken place to move the Hammers from relegation battlers to European contenders.

Signed from Uruguayan second division outfit Deportivo Maldonado in 2016, Calleri made 16 appearances for the club and scored only one goal. However, his story leads to a wider web of intrigue about third-party ownership and the mechanics of South American football.

Travel to Maldonado, Uruguay’s seventh-largest city, and you will find the local side, Deportivo, playing in front of crowds of fewer than 300. Yet the club has a history of selling players to wealthier clubs – Everton’s Allan joined Vasco de Gama in 2009 while Alex Sandro moved to Juventus two years later. The catch? None of these players ever played a game for Deportivo Maldonado.

Quickly scouring the internet, it becomes apparent the club are swimming in the murky waters of third-party ownership. In fact, the club are (or possibly were) owned by two English investors: Malcolm Caine (a racehorse owner) and Graham Shear (a London-based lawyer). Together, they bought the club to ‘ease the tax burden of investors who own transfer rights’. While this does not contravene FIFA rules on the matter, the club are undeniably playing a dangerous game.

Enter West Ham. The summer of 2016 saw Slaven Bilic’s entertainers move to the London Stadium looking for a prolific striker to fire their push for Champions League qualification (pride is always highest before a fall). After being rejected by the likes of Alexandre Lacazette and Michy Batshuayi, the club ended up with a buffet of strikers that was more bargain bucket than gourmet.

Alongside the legendarily bad Simone Zaza, Gokhan Tore and Sofaine Feghouli was the unknown Calleri. When asked about his signature in a pre-match interview, Bilic claimed to have signed a “top striker”, showing the same commitment to dishonesty that got Laurent Blanc sent off in the 1998 World Cup semi-final.

Calleri, to be fair, had previously scored this rabona for Boca Juniors, which was enough to set the pulses of some West Ham fans racing.

If at first you don't succeed, Rabona it over the keeper's head.pic.twitter.com/gUoFzubFil

Calleri initially made little impression, beyond sparking the realisation for supporters that here was a player whose second touch was a tackle. As West Ham struggled in their new stadium and slipped into their natural habitat of the bottom six, chances were few and far between for the young Argentine.

His first, and only, goal for the Hammers came in a January win at Middlesbrough. Already leading 2-1, the substitute struck an effort in the general direction of the goal. Happily, on this occasion, the advertising hoarding-bound shot deflected of Boro’s Adam Clayton and ended up in the net. Calleri peeled away with a look of disbelieving delight etched on his face, mirroring that of the travelling supporters.

Despite this exhibition of quality football, Calleri would have to wait three further months for his first league start. This came in April’s home match with Everton, a game West Ham needed points from to ease lingering relegation worries. As the hot spring sun shone across east London, Calleri must have felt emboldened to attack this rare opportunity.

Fittingly, the game passed without almost any incident whatsoever. After 24 touches, producing one of the more hilarious heatmaps in recent memory, Calleri was replaced by commitment’s Diafra Sakho. As if mirroring the impact of West Ham’s starting striker, the match ended in a forgettable stalemate.

Calleri’s defining moment was still to come. As West Ham and Stoke ground their way towards another goalless draw, Calleri found himself with the chance to become the match-winning hero – all he had to do was sidefoot the ball either side of Shay Given. Inexplicably, this was the moment Jonathan decided to transform into the poundshop Messi.

Instead of slotting home, Calleri attempted football’s least appropriate rabona ever. It goes without saying the effort hit Given straight in the midriff and the match ended level. West Ham did not pay the £16million to make his loan stay a permanent one.

Don’t let the streets forget, Jo Calleri, who had previously scored once in 17 games attempted a rabona in a 0-0 draw with Stoke pic.twitter.com/Cgvz3kQvBC

Since his spell in east London, Calleri has toured the Spanish peninsula turning out for Las Palmas, Alaves and Espanyol, never scoring more than nine goals a season despite even this modest figure seeming like a misprint. This season, Jonathan will ply his trade for Osasuna. It is his sixth loan spell away from Deportivo Maldonado, for whom he is still yet to kick a ball.

Last season, Calleri appeared back on English radars after notching a hat-trick for Espanyol in their Europa League exit to Wolves. This performance prompted amazed incomprehension from West Ham supporters, whose club have failed to score a single goal against Wolves since the Midlanders’ return to the Premier League.

Maybe Calleri wasn’t played enough or maybe he just wasn’t good enough. Truth is, West Ham’s scattergun approach to recruitment means we shall never know if Calleri could have blossomed into something more.