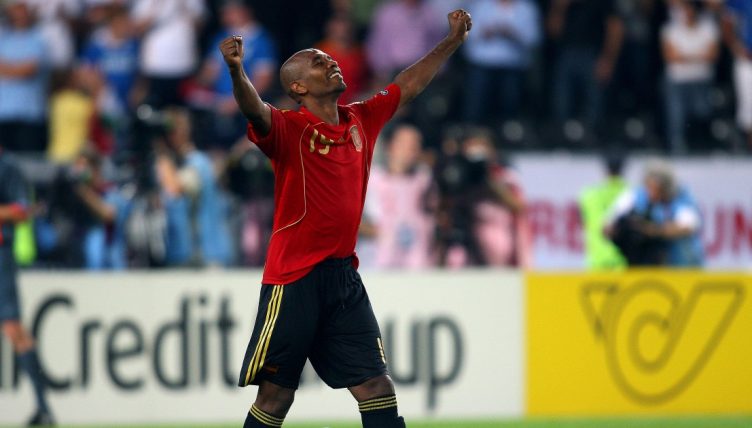 When Marcos Senna entered the field during Spain’s World Cup last 16 clash with France in 2006, his adopted nation were level and pushing to go in front.

But, in the 20 minutes that followed, the eventual finalists kicked things up a gear, dumping Spain out of the competition with goals from Patrick Vieira and Zinedine Zidane.

In Senna’s mind, this painstaking premature exit was the “worst memory” of his career, but it was perhaps the wake-up call needed to kickstart La Furia Roja’s period of dominance.

It’s natural to overlook Senna when remembering the Spain side which won three major competitions on the bounce. During Euro 2008, Senna’s sole international triumph, he was tasked with sitting behind an array of attack-minded midfielders. Senna was the Stig Anderson to Spain’s ABBA.

To call him the heartbeat of the team would be an injustice – he was a larger organ, perhaps the skin, the foil which allowed other parts to function at their peak. He also provided the blueprint for his successor, essentially giving Sergio Busquets seven 90-minute tutorials on how to perform as the enabler of longstanding talents such as Xavi, Iniesta, Silva and Fabregas.

As Senna has said: “I had to do the dirty work, but football has evolved so much that even the holding midfielders need to know how to carry the ball as well. If I wasn’t capable of doing that I probably wouldn’t have played.”

To label any player ‘underrated’ or ‘overrated’ is not only a paradox, it’s an incredibly boring and overused way to have a discussion. And in Senna’s case, it doesn’t quite feel right to call him ‘unheralded’ or ‘under the radar’ either; he made it into the Euro 2008 team of the tournament.

Perhaps the lack of discussion around Senna’s career stems from forgetfulness rather than underappreciation. He doesn’t have the charisma, highlight reel or hairline to match the post-career stature of Andrea Pirlo, yet he most certainly does have the peak.

Sought after by Manchester United at one stage, one wonders how his career may now be perceived if he had dared to step into the spotlight at club level. While he certainly has the international accolades, he lacks the club awards to be in the same conversations as the likes of Deschamps and Makelele.

However, to turn his back on Villarreal in pursuit of a footballing superpower like United would have been deeply out of character for a man who did his best work in the shadows.

Humble on and off the pitch, Senna perhaps never valued himself as highly as his respective managers and team-mates: “I never imagined playing for Spain, so I consider myself very lucky to have been part of that winning generation.”

Senna was ‘lucky’ to play for Spain’s winning generation in the same way that Elle Woods was ‘lucky’ to get into Harvard Law (yes, this is a Legally Blonde reference on Planet Football). If luck is when opportunity meets preparation, he could hardly have made himself more prepared.

While the midfielder himself puts the recoveries from his four severe knee injuries down to God’s grace, hard graft and determination probably played a hand, too. Talking about his upbringing in 2019, Senna recalled the Brazilian saying that “you have to kill a lion every day” to succeed.

And it would considerably tougher to kill a lion when your knees are made of cardboard.

After being used cautiously in the immediate aftermath of one of these injuries in 2003, Senna made his presence felt when allowed to work as a regular in Villarreal’s midfield.

Working as the key cog at the base of midfield, Senna provided the platform for his club to surge to a Champions League semi-final in the spring prior to the 2006 World Cup. His prominence was escalated with the award of the captain’s armband, and Senna was ready to translate his club form to the international stage.

However, just as the captain of the Yellow Submarine was not John, Paul, George, or even Ringo, the captain of this Yellow Submarine was not as widely celebrated as his co-inhabitants. A terrifying attacking pairing of Juan Roman Riquelme and Diego Forlan meant Senna could quietly go about his business at the base of midfield, pulling the strings delicately and without fuss, drawing no attention, like a funeral harpist.

At both club and international level, Marcos Senna worked best as a humble conductor, performing with a quiet brilliance while the main conversation lingered on those in front of him.

When discussing the Soprano crime family, nobody hastens to mention Albert Barese, the unproblematic captain who focuses on quietly posting money up to his boss, while his workmates start fires and make ill-fated jokes about each others’ wives. But he’s a good earner. We all know it. We just don’t talk about it as much as we should. Maybe he likes it that way. Likes it that way.

As Johan Cruyff posited: “Playing football is very simple, but playing simple football is the hardest thing there is.”

He certainly seemed to master the art of simple football, but without the sustained momentum and off-field persona to match other great defensive dictators, Marcos Senna seems doomed to the periphery of conversation. But, as we know, this is where he does his best work.

READ NEXT: Celebrating Juan Carlos Valeron and his remarkable career in Spain

TRY A QUIZ: Can you name Spain’s XI from their World Cup final win v Netherlands?