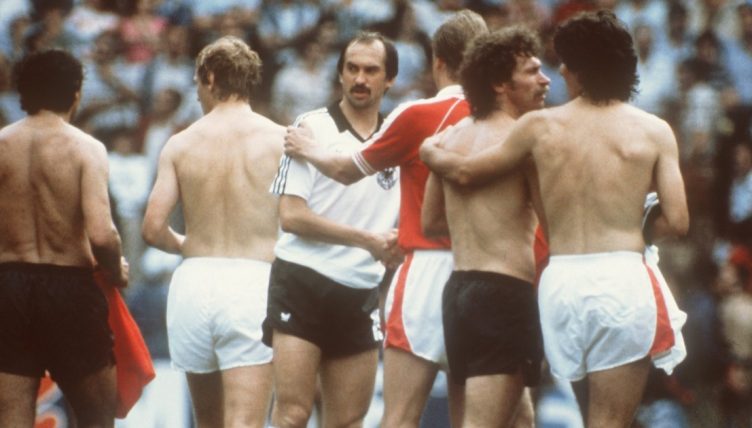 There’s a reason why the World Cup is the biggest event in sport. For all FIFA’s failings, and the modern game’s various ills, football captivates like nothing else.

Which is why its low points stand out so egregiously. Tragedies involving the lives of players and supporters belong in their own harrowing categories, but in terms of football itself, no game lives in infamy quite like Austria and West Germany’s clash at the 1982 World Cup in Spain.

By ‘clash’, we mean ‘kickabout with all the intensity of an over-70s Sunday morning park run’, made worse by being played out in front of 41,000 spectators that gradually grew increasingly irate at the lack of spectacle. The locals of Gijon had paid their pesetas to witness a void where football should have been.

There are a few games that are so memorable that they’re known not by their scoreline, but by a nickname, invariably involving hackneyed war terminology.

‘The Disgrace of Gijon’ does no such thing, but it’s an apt description for a display of supremely cynical anti-football that would make Tony Pulis blush.

After all, defending with 11 men behind the ball is a legitimate way to compete, but there was no competition between Austria and West Germany on June 25, 1982. It was anti-football in the truest sense of the term.

West Germany, the Champions of Euro 80, travelled to Spain among the favourites and carried themselves with the cartoonish arrogance of a schlocky Rocky villain of the same era.

“We will dedicate our seventh goal to our wives, and the eighth to our dogs,” Paul Breitner is alleged to have said ahead of their opener against unfancied opponents Algeria.

But the North African outfit produced a shock result, beating the Germans 2-1 to make themselves neutrals’ favourites and give themselves a real chance of progression past the first of two group stages.

Algeria followed that up with a 2-0 defeat to Austria before getting themselves back on track with an entertaining 3-2 victory over whipping boys Chile in their final match.

In spite of winning two of three games, Algeria had a nervous wait in an era when the final matches were not played simultaneously. A narrow West Germany win would result in their fall to third place via goal difference. And so it came to pass.

Hamburg forward Horst Hrubesch bundled home the opener for Germany in the 11th minute, and in the opening stages there was some semblance of competition and jeopardy.

There were chances at both ends, and Germany spurned opportunities to double their lead. Another goal would have put the Austrians at risk of falling behind Algeria, and had Breitner finished one of his chances – ironic that he couldn’t, given his boasts about notching sevens and eights – an actual football match might well have broken out.

Context is everything in football. Were Liverpool drawing 1-1 with West Brom in August, Alisson wouldn’t have charged up in search of an injury-time goal; come May, there was every reason to. Likewise, the flow of any final five minutes will likely tell you which side is protecting a one-goal lead.

So it was only natural that the match didn’t develop into a classic. Given the potential for elimination, no one could reasonably expect either side to have thrown caution to the wind, bombed forward and left the kind of gaps that might have cost them a place in the next round.

But there’s cautious football – England vs Scotland, anyone?  – and then there’s being risk-averse to the point of parody. They’d long since passed that stage by the time Bayern Munich superstar Karl-Heinz Rummenigge, who had scored in the defeat to Algeria and bagged a hat-trick against Chile, was substituted off in the 66th minute to a chorus of boos and jeers from the weary Spanish spectators. 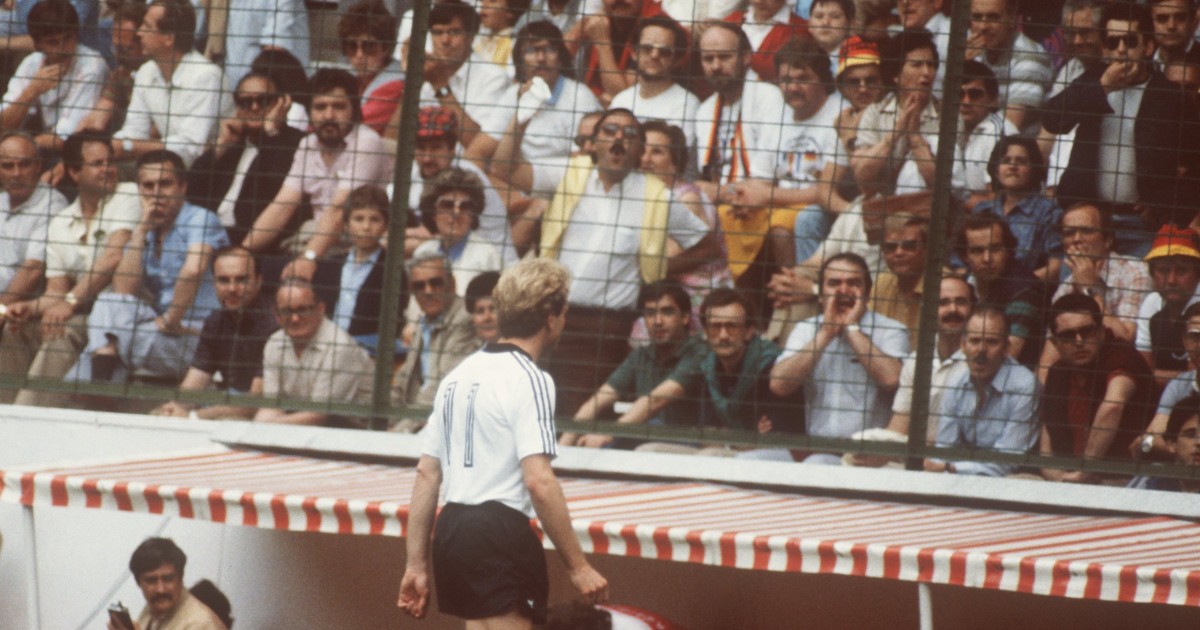 As the braying mob became driven ever more frustrated by the tedium that was unfolding before their eyes, so did the broadcasters, who pulled no punches over the exasperated whistles coming from the stands.

“What’s happening here is disgraceful and has nothing to do with football,” the German commentator said, while his Austrian counterpart famously instructed viewers to turn off their television sets and refused to utter any more words to accompany the grim pantomime.

Meanwhile, in the UK, ITV’s Hugh Johns sounded as if he were narrating a pensioner getting mugged as the final few seconds played out: “Breitner, for Breigel, for Stielike… names that roll off my tongue at the moment, and leave a nasty nasty taste.

“Quality players who should all be put in the book of referee Bob Valentine for bringing the game into disrepute. This is one of the most disgraceful international matches I’ve ever seen…

“This crowd is disgusted that West Germany could come here and win so gently, so easily, in a canter, allowed to by an Austria side who never got into anything approaching second gear, let alone top gear.

“Austria never set out to win this game at all, they knew that a 1-0 defeat to West Germany would ensure that both teams would get through to the second stage.”

Come those closing stages, few passages of play in the sport’s history have resembled The Simpsons’ beloved ‘holds it’ skit quite so closely. Both sides had long since given up any facade that they were looking for a goal.

The fallout from the match saw protestors gather outside West Germany’s hotel. In response, Germany’s squad pelted them with water bombs. Both sides were pilloried by the press, at home and abroad, while West Germany made themselves even more unpopular after Toni Schumacher’s assault of Patrick Battiston in the semi-final.

Algeria’s FA lodged an unsuccessful appeal to FIFA, and the fixture remains their Hand of God moment. When they were given an opportunity for revenge against Germany in the 2014 World Cup, Algeria coach Vahid Halilhodzic stressed “we have not forgotten” in the pre-match build-up, refusing to play down the history as a diplomat might have.

For Austria, ‘the Disgrace of Gijon’ dominated the pre-match chatter ahead of their final Euro 2020 group stage match against Ukraine, in which a draw would almost certainly have seen both teams through. The Austrian FA’s president denied there’d be another non-aggression pact, and it proved so: they put in a dominant performance against Andriy Shevchenko’s men and deservedly won 1-0.

FIFA tweaked their rules to try avoid the possibility of a repeat, with the concluding rounds of any groups now played simultaneously. Every major league now does the same on the final weekend. Thankfully we’ve never seen anything quite like it ever again.