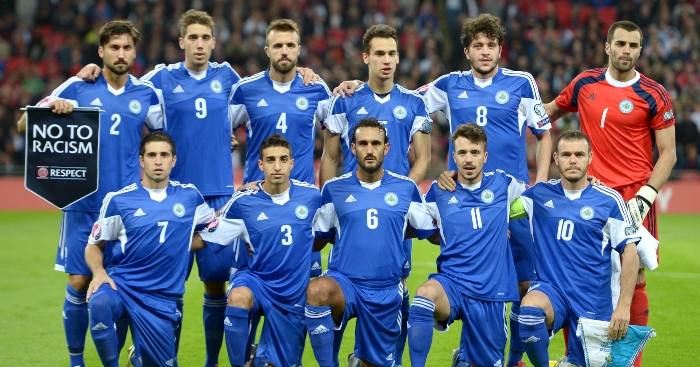 There are very few constants in football, but we do still have a handful: Romelu Lukaku scoring against West Ham; Alan Pardew blaming everyone but himself for his woes; and, of course, San Marino losing international games.

The micronation has played international football since 1990, taking part in 66 competitive games and losing 64. The overall record, including friendlies, isn’t much better. 157 games: one win, four draws and 152 defeats, the heaviest coming by 13 goals to nil against Germany in 2006.

There’s even a Wikipedia section entitled “List of international matches not lost by San Marino”, which is telling in its own way. We’ve ranked the five, from least to most embarrassing for the team on the receiving end.

San Marino’s lowly ranking is understandable, given the country’s population of less than 35,000. When you’re drawing from such a small pool, you’ll naturally be at a disadvantage.

Liechtenstein isn’t much bigger, with a population of just a few thousand more, though the principality has enjoyed a slightly better time in football terms with a massive seven competitive wins.

They remain the only nation to score twice against San Marino and fail to win, but we’ll give them the benefit of the doubt and suggest they let their guard down because this was a friendly.

Former Serie A striker Mario Frick opened the scoring for Liechtenstein and Darlington legend Franz Burgmeier doubled the lead, but Bryan Gasperoni and Nicola Ciacchi both struck before half-time to level things up.

In the contemporaneous qualifying campaign for Euro 2004, San Marino conceded 30 goals in eight games and scored none. Liechtenstein can’t be happy at surrendering a two-goal lead, but at least they scored two.

You know the soccer struggle is real when your national team's Wiki page has this section: pic.twitter.com/Dj9zy3iq74

San Marino’s most recent point is next up, and Estonia get some credit for their draw coming away from home. Only some credit, though.

The Baltic nation had made the play-off round in qualification for Euro 2012, losing to the Republic of Ireland after winning more matches than they lost in their group thanks to victories in Serbia and Slovenia.

They should not have been caused any difficulty by San Marino in the Euro 2016 qualifying campaign, yet drew a blank against the minnows.

The worst thing was that Estonia didn’t even really dominate. They managed 16 shots in the game, with five on target, compared to 12 and 2 respectively for their hosts. Sounds like an even game that deserved to end level, if you ask us.

At least they got their revenge with a 2-0 win in Tallinn the following year.

When Marian Pahars put Latvia ahead in the opening minute against San Marino in 2001, some of their fans must have been gearing up for a high score.

The Sammarinese had shipped four against Scotland and 10 against Belgium in their two previous away qualifiers, so Gary Johnson’s side may well have seen their narrow win in Serravalle as an exception rather than a representation of their level.

A second goal didn’t follow, though, and as the second half got underway the visitors started thinking they might be able to avoid defeat away from home for the first time in their history.

Sure enough, Nicola Albani popped up with a leveller early in the second period and they held on for a memorable point.

Albani took the goal well, too, stealing in at the back post to meet a free-kick with a stooping header that had just too much for goalkeeper Alex Kolinko.

Turkey weren’t quite the power they’d become in the 2000s, but the 1993 incarnation still recorded wins over Poland and Norway during their qualifying campaign for the 1994 World Cup.

Put simply, San Marino shouldn’t have caused them any problems.

Turkey’s line-up that day included multiple players who would travel to Euro 96, including Tugay Kerimoğlu and Bülent Korkmaz, while even the prolific Saffet Sancaklı couldn’t find a way past substitute goalkeeper Stefano Muccioli.

Oh yeah, did we mention San Marino were without starting goalkeeper Pierluigi Beneddetini after he was forced off injured inside the opening 10 minutes? It feels like they ought to have been able to find the net at least once in those circumstances.

Yes, it was a friendly, and yes, the aforementioned points about Liechtenstein’s size apply, but being the only team to ever lose to San Marino feels like a big deal.

Andy Selva’s name will forever go down in Sammarinese history for his part in this game. The Rome-born striker already earns that honour having captained the national side and is their all-time top scorer (with a massive eight goals), but this cements his status.

Selva scored early, striking a beaut of a free-kick in the fifth minute, meaning the home side faced nearly an hour and a half of concentration while knowing a single goal from Liechtenstein would deny them a place in history.

Back in 2004, when Peter Jehle became the first goalkeeper to concede a San Marino winner, he was a 22-year-old just finding his feet in the Swiss league. Fourteen years later, when he retired with more than 100 international caps to his name, he still stood alone.