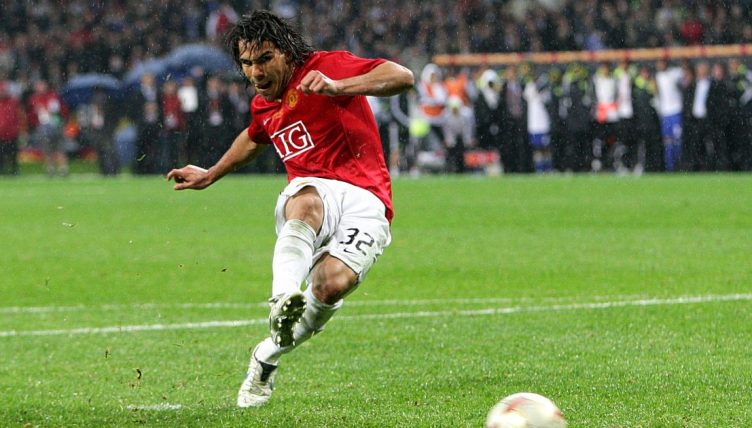 Manchester United were famed for their counter-attacking goals under Sir Alex Ferguson – and Carlos Tevez nearly scored one of the very best in the 2008 Champions League final.

United were built to hit teams on the break under Ferguson and could go from one end of the pitch to another in the blink of an eye at their best, scoring more than 100 counter-attack goals during the legendary manager’s time in charge at Old Trafford.

Wayne Rooney and Cristiano Ronaldo were particularly potent in the art of counter-attacking and combined to score a few iconic goals, including perhaps the best of them all in the 2009 Champions League semi-final against Arsenal.

“Attacking is about combinations too and even though people say our United team had all these great players, in reality our biggest strength was as a pure counterattacking machine,” Rooney told the Sunday Times in May 2020.

“We would sit back in our shape, win the ball and just go. We trained counter-attacking from one goal to the other. In the drill we had eight seconds to score.

“We put a striker on the halfway line and two players on either side of the goalposts. One would play the ball up to the striker and both would sprint to join him. With two defenders against you, you had eight seconds to score.”

The goal was later voted as the BBC 06/07 goal of the season. #MUFC pic.twitter.com/RZAMZdrKD2

Not content with that dynamic duo, Ferguson bolstered his attack further in the summer of 2007 with the signing of Carlos Tevez, completing his last truly great team at Old Trafford.

With a trident of forwards that possessed devastating pace and power, United now boasted the most fearsome counter-attacking side in Europe. Ronaldo, Rooney and Tevez scored an incredible 79 goals between them in 2007-08, with Ronaldo remarkably providing over half of them himself with 42.

The Portuguese’s hunger for goals was complemented brilliantly by Rooney and Tevez’s selfless team-first mentality, and opposition defences simply couldn’t live with them.

The trio powered United to another Premier League title in 2007-08 and also their first Champions League final in nine years. Had it not been for a ridiculous FA Cup game against Portsmouth which ended with Rio Ferdinand in goal, we could easily have been talking about another treble.

Against Chelsea in Moscow, after Ronaldo had given United an early lead, the game was set up perfectly for them to once again play on the counter-attack. And it almost led to something quite sensational.

Despite being a striker, Rooney found himself in the right-back position following a Chelsea corner, hassling and harrying Ricardo Carvalho.

As soon as Rooney wrestled the ball back in his own half, it was a trigger for the rest of United’s attack to get moving.

Still, even after breaking clear of Carvalho, Rooney was still well inside his own half with only Ronaldo and Tevez to aim for and five Chelsea players ahead of him to block the path.

But this was peak Rooney so of course he played an inch-perfect, 60-yard pass over to the other side of the pitch where Ronaldo was hurtling down the wing.

And this was peak Ronaldo so of course he got there ahead of Michael Essien and Ashley Cole to take the ball in his stride.

Perhaps with that eight-second rule in his head, he wasted no time before crossing the ball into the box towards an onrushing Tevez and, of course, it was perfect.

The Argentine connected with a diving header, too, but Petr Cech had clearly not read the script. After doing all the hard work, United failed at the final hurdle as the goalkeeper spoiled their fun with a brilliant save from point-blank range.

Michael Carrick tried to rectify the situation when the ball fell to him at the edge of the box, but Cech the spoilsport saved that too.

Still, it was one of the great United counter-attacks under Ferguson, on the very biggest stage. The move was as clinical as a military operation. It just lacked the goal at the end of it, but yer know, minor details.

These were the best two teams in England at the peak of their powers and United had cut Chelsea apart with ease.

The Londoners did equalise, though, and as we all know, Cech could easily have ended the game as the hero after saving Ronaldo’s penalty in the shootout, but John Terry slipped, Edwin van der Sar saved from Nicolas Anelka and the rest is history.

As for Tevez, he soon fell out of favour and joined cross-town rivals Manchester City 12 months later.

Had he scored that goal in Moscow, perhaps it would all have been different.