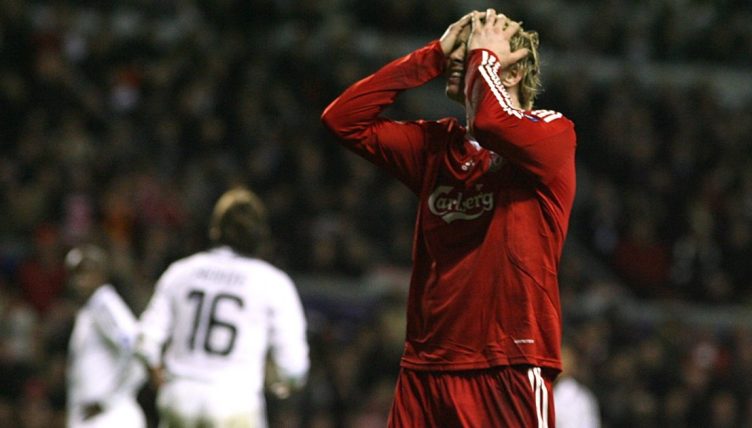 When Iker Casillas is turning to Fabio Cannavaro to brandish the universal hand signal for ‘calm the f*ck down’, you know something extraordinary has happened.

Come the end of the night of March 10, 2009, when Real Madrid travelled to Anfield for the second leg of their Champions League round of 16 tie against Liverpool, Casillas was reduced to just shaking his head in resignation.

We know all about these kind of nights at Anfield by now, when the opposition seem to find themselves lost amid a hurricane of red shirts and scouse howls, left to pick up the pieces of events like the morning after a night in Amsterdam – and the writing was on the wall for Casillas and co after just three minutes.

There are so many great Fernando Torres moments to choose from his time at Liverpool – his first goal for the club against Chelsea, the volley against Blackburn Rovers, the numerous times he plagued Nemanja Vidic and Manchester United – yet that third minute against Real Madrid perhaps encapsulates the striker at his exhilarating best.

Torres had limped out of Liverpool’s 1-0 victory in the first leg after an hour due to an ankle injury and only made the starting XI for the return fixture after a painkilling injection and days of pleading with Rafa Benitez that he was fit and ready.

As if the motivation of reaching the Champions League quarter-finals wasn’t enough, as a boyhood Atletico Madrid supporter, he was never going to miss the chance to put Real to the sword.

And so, after little over 180 seconds, he did this.

Fabio Cannavaro was moulded in the grand tradition of classy Italian centre-backs whose strength can be found in their ability to read the game and outsmart their opponents rather than bully them with physical prowess.

As a World Cup-winning captain and the last defender to win the Ballon d’Or, Cannavaro lived up to compatriot Paolo Maldini’s theory: “If I have to make a tackle then I have already made a mistake.”

For a footballer who defended with such artistry, it’s only fitting that he was tormented by a piece of play so beautiful.

You can rue the fact that Torres was subsequently denied by Iker Casillas, who produced a stunning individual display despite ultimately conceding four goals, but perfection is boring. Torres has always been as flawed as the rest of us; that has helped make him such an alluring player throughout his career.

And anyway, those two seconds between collecting the ball and testing Casillas were much more significant than trying to score. They were a warning to Real Madrid, and a signal of intent from Anfield.

Instead, he left it until the 16th minute to finally get the ball rolling, by which point Casillas had been forced into another excellent stop from Javier Mascherano’s volley and the visitors’ back four were suffering with nervous breakdowns.

After a long ball was allowed to bounce, Cannavaro made a mess of an attempted clearance under pressure from Torres, and Pepe dived to floor in his own penalty box with the striker breathing down his neck. Dirk Kuyt squared the loose ball, and Torres got the fun underway.

When the final whistle was blown, Liverpool had won 4-0. Were it not for a number of fine saves from Casillas, the Reds, and Torres, would have had far more. Cannavaro, three years on from being named the finest player on the planet, had to be taken off just after the hour mark.

Torres himself was taken off 10 minutes later, replaced by unlikely goalscorer Andrea Dossena having made his mark on his old rivals.

“The kit man, doctors and physios were very good,” Benitez said in his post-match press conference, typically reluctant to single out his compatriot for praise.

But in that early moment of magic from Torres, even Rafa couldn’t have helped but fall under his spell.