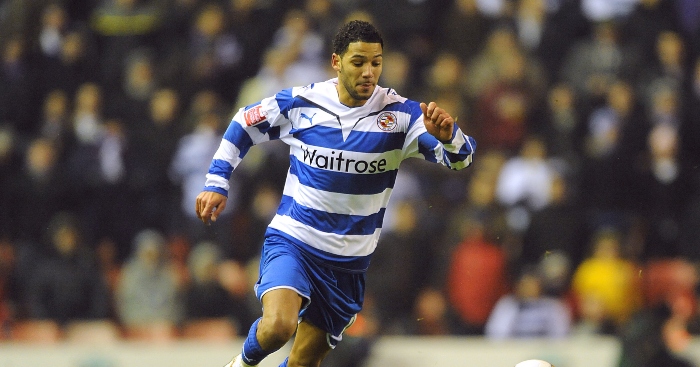 FA Cup giant-killings tend to follow a familiar pattern, and Jobi McAnuff should have recognised that before he attempted to go against the grain when Reading took on Liverpool in 2010.

Underdogs need one of three types of goal in order to proceed: a set piece, an unlikely contribution from a substitute or a long-range blast. Nothing else will do.

McAnuff thought he could get away with a piece of real brilliance; a move several pay grades above the team he was representing. He was wrong.

The Royals had been struggling when they welcomed Liverpool to the Madejski Stadium in January 2010, sitting just above the Championship relegation places after a poor run of form which saw them part ways with manager Brendan Rodgers.

However, they had enough about them to force a replay against Rafa Benitez’s team, with Simon Church and Steven Gerrard exchanging first-half goals.

The Reds weren’t at their strongest for the replay, but they still had the likes of Gerrard, Jamie Carragher and – until injury ended his evening after half an hour – Fernando Torres.

Liverpool also had the benefit of a midweek Anfield crowd, so, when a Ryan Bertrand own goal gave them the lead, that was meant to be that.

Nobody told McAnuff, though, and he decided – almost unprompted – that he wanted to do it all himself.

When the winger collects Alberto Aquilani’s loose pass, he has a bit of work to do just to emerge from the battle with Dirk Kuyt with the ball still in his control, but as soon as he escapes the Dutchman – and the closing Lucas – he has clear air ahead of him.

As with George Weah’s piece of brilliance against Verona and Ryan Giggs’ winner in the victory over Arsenal in 1999, many of the best solo goals involve moments in which a player simply jogs into empty space.

The difference comes from what they do in the other moments. Weah and Giggs got 100% of it spot on. McAnuff was 95% there, but sometimes that’s what matters.

His little burst to get between Philipp Degen and Daniel Agger is a thing of beauty, conjuring memories of Ronaldo’s Barcelona days. It’s like watching an overtaking manoeuvre in Formula 1 – everything either side of the move can be perfect, but if you misjudge the tiniest of gaps then it was all a waste. 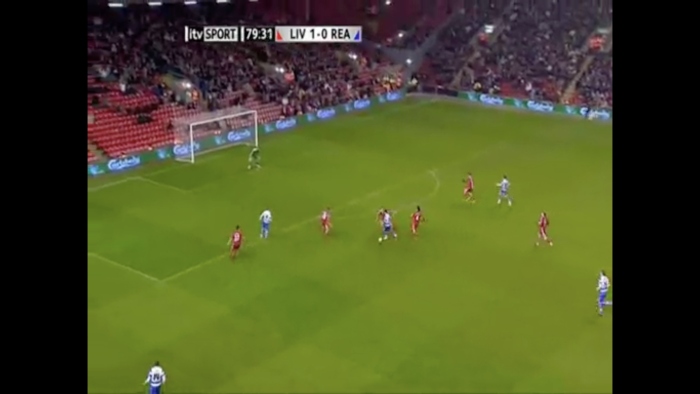 By the time McAnuff releases the shot, Diego Cavalieri is effectively seated. He knows it’s already out of his hands, both literally and figuratively.

The goalkeeper senses he’s already a black-and-white static figure in a montage, with McAnuff strolling through in vivid colour, and he can’t even be that angry about it. This was his first game in more than a month, and he wasn’t in any position to step in the way of fate.

As Cavalieri drops to his haunches, McAnuff calms himself, opens up his body, and slots the ball into the… wait, what?

McAnuff instinctively puts his head in his hands, but that little slump after? That’s where he’s going one step further, sinking down as he realises how big an opportunity he has missed.

These chances don’t roll around all that often, and they certainly don’t roll around twice for Championship players visiting Anfield. You can see the exact moment where his emotion shifts from “I’ve missed” to “I could have… oh no”. 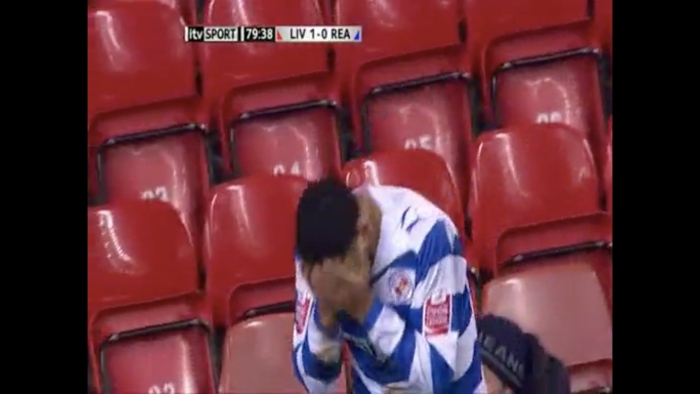 There’s a twist, though. Not only did McAnuff threaten to go against what’s supposed to happen with that run, but his team-mates upset the odds by coming back from that crushing low to still win the game.

Gylfi Sigurdsson drew them level with a stoppage-time penalty after Shane Long was clipped by Yossi Benayoun. Would Reading have even been in the Liverpool box if McAnuff had levelled, or would they have been shutting up shop and preparing for extra-time?

Would they have had the momentum to take the lead through Long during the extra period if their equaliser had come 11 minutes from the final whistle rather than one, or would the Premier League quality have shone through?

Had McAnuff scored, instead of sending the ball wide of the far post, Reading might not have been given the cup run which helped them salvage their season and escape the drop to climb to mid-table.

They might not have been able to kick on the following season, and the one after, finishing fifth and then first to return to the Premier League.