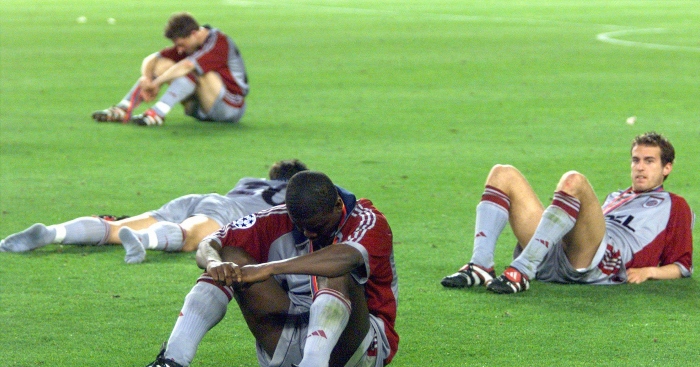 Time can warp our memories, and the 20 years which have passed since Teddy Sheringham and Ole Gunnar Solskjær struck at the death to hand Manchester United a Champions League title have turned much of the previous 89 minutes into an afterthought.

However, in the time between Mario Basler opening the scoring and Sheringham drawing United level, there was plenty going on: Carsten Jancker hit the bar at 1-0, and, moments later, Mehmet Scholl almost scored one of the great Champions League final goals.

Scholl had missed most of the 1998-99 season due to injury, but he returned to the first-team set-up towards the end of February and had recaptured his best form by the time of the Champions League final, scoring four goals in the last five Bundesliga games, albeit the last of those came after that night in Barcelona.

His first of those four goals was a clincher in a come-from-behind win over Borussia Mönchengladbach, where he toyed with defender Max Eberl before holding off and holding off again until he had space to find the corner.

The second, meanwhile, was maybe even more extravagant. With the scores locked at 0-0 in Stuttgart, he beat goalkeeper Marc Ziegler to a ball over the top before firing an unnecessarily showy scissor-kick into the empty net.

If the goal against Gladbach was for the Bayern fans who had missed his presence for months, the one against Stuttgart was one for his own enjoyment.

Scholl always had that duality at Bayern. He had an unselfish streak to help the team where required, but there was always an element of flair to get fans off their seats.

The Euro 96 winner was left out of the starting line-up for the Champions League final, just as he was for the second leg of the semi against Dinamo Kyiv, but he entered the fray 20 minutes from time as Bayern sought to kill off the game and prevent a United revival.

“Until then it had been a pretty even match, but once Mehmet and I were playing together we made a lot of chances,” Stefan Effenberg later recalled. It so nearly finished off the English club, too.

Two years prior, another Germany international in Lars Ricken had helped Dortmund win the trophy by lifting the ball over Juventus goalkeeper Angelo Peruzzi.

Scholl’s task was made that bit tougher by the presence of Peter Schmeichel in the opposition goal, but he got the elevation spot on. If we could say the same about the direction, the last 20 years of European football could well have gone very differently.

Just minutes earlier, Schmeichel had stood firm and narrowed the angle to deny Effenberg as the Bayern midfielder attempted to lift the ball over him from close range: it felt like, whenever he closed on you, he grew in stature at twice the rate the laws of science dictated he was supposed to.

The sight of Schmeichel approaching was enough to instill fear into the hearts of most men, but Scholl was unfazed. He looked like he had a sixth sense for where the goalkeeper was and where he was going to be, and lifted the ball with the grace of a basketball player firing home a crisp three-pointer.

Scholl shimmied to buy himself a yard of space. He sent the chip towards the far corner. Schmeichel flapped like an action movie villain scrambling to grab hold of a cliff edge before plunging towards his death. The crowd rose. The net braced itself for impact. But then… no.

You could almost see Schmeichel give up and accept this wasn’t his or United’s year, but then the ball didn’t hit the net. There was no ripple. As the goalkeeper turned around anticipating heartbreak, he was instead greeted to the sight of the ball bouncing back and returning into his arms.

It was a sign. A new lease on life. The next time Scholl went for goal, Schmeichel was equal to it. When Bayern squandered another chance, Carsten Jancker sending an overhead kick against the bar, you feel United knew the game was theirs.

It’s easy to wonder what would have happened if Scholl’s effort had bounced in off the post, rather than back into Schmeichel’s hands.

The mental blow would surely have made United’s task impossible, and even if they did net twice from 1-0 down at Camp Nou, it seems far less likely that they’d have been able to pick themselves back up from a two-goal deficit.

United, rather than Bayern, might have ended up responding to defeat by going on to win the trophy two years later, and their pursuit of European glory might have got in the way of a couple of title runs.

The FA Cup might not have been hit by a United withdrawal, helping the authorities better prepare for the eventuality of an English team taking part in the Club World Cup.

Most importantly, though, Scholl might have received the recognition outside Germany that he deserved, both during and after a career which had its fair share of high points but could have had many more.