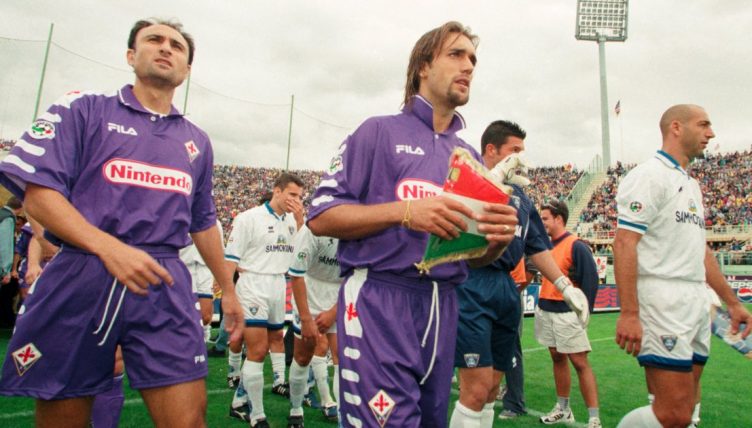 Gabriel Batistuta. You remember him. Beautiful blue eyes, hair like a wild stallion and a right foot like a traction engine.

For many of us, our introduction to the Fiorentina striker came on Saturday mornings through Gazzetta Football Italia. James Richardson sat in a cafe, coffee and croissant close at hand, talking us through another gloriously violent week of goalscoring for the Viola forward.

All in all, he plundered 207 goals in 333 games in Florence. Here are four examples of Batigol doing what he did best.

Wednesday night Champions League coverage on ITV offered a rare opportunity to see exotic foreign talents. These were the days when the internet was still in its infancy and your primary place for research on continental players was Championship Manager. Even then, it wasn’t always a reliable source of information. Just ask Ibrahima Bakayoko.

Anyway, the visit of Fiorentina to Old Trafford in 1999-00 held no such mystery. By now the likes of Batistuta and Rui Costa were household names. United were all too aware of the dangers they posed. But even then, Batistuta still has one act of unspeakable savagery up his sleeve.

Midway through the first half the Argentinian holds the ball up, turns his man and shapes to shoot on goal from fully 35 yards on the half volley. It’s a ludicrous suggestion. The sort of thing to make you snort out your prawn sandwiches.

Nonetheless, a millisecond later the ball is through Mark Bosnich’s fingers quicker than you can say “someone get me Fabien Barthez’s mobile number”. In fairness to the big Australian, you can understand if he was caught a little off-guard. The week prior United had been at home to Derby County. You didn’t see Dean Sturridge trying that sort of nonsense.

Even Big Ron, a man with his own interpretation of the English language in the commentary box, is momentarily lost for words.

“What is he like?” is the best he can muster.

When the ball is chipped in his direction on a Sunday afternoon at the San Siro in 1996, you don’t really fancy Batistuta’s chances. He’s running away from goal directly into the path of Franco Baresi and Paolo Maldini. Traditionally they afford opposition attackers the same sort of space Jabba The Hutt might find in a phone box.

Which is what makes this goal so exceptional. For once Batigol’s first touch is not a thunderbastard. Instead, it’s a gentle caress away from Milan’s legendary No.3 and over the head of Milan’s legendary No.6, leaving the latter floundering in the dirt like he’s looking for a lost contact lens.

This is the great Franco Baresi he has humiliated here. A global icon and a national treasure. For Batistuta to treat a man who has contributed so much to Italian folklore with such contempt is utterly despicable. It’s like marching into Le Louvre and drawing a cock and balls on Mona Lisa.

By the end of the campaign, Baresi had announced his retirement from professional football. You wonder how much this goal influenced his decision.

This deserves a mention as potentially The Most Unlikely Gabriel Batistuta Goal Of All Time. As Batistuta gets the ball out from between his feet, it seems to most casual observers that he has two clear choices:

A) Hit the ball with his trademark ferocity, i.e. as if he’s just discovered it nicking a fiver from his nan’s purse.

B) See above, but with more ferocity, please.

Though no one has precise metrics to hand, this is based on the common assumption that all Batistuta finishes are legally obliged to involve some degree of wanton violence.

What no one, and certainly not least the goalkeeper, could possibly foresee is that at the moment of truth Batigol would float up the daintiest of chips like he’s a distant cousin of Philippe Albert. It is an exquisite, unexpected piece of top-class finishing.

Gabriel Batistuta vs Inter in the 1996 Coppa Italia. What a goal! pic.twitter.com/jRQhSqOyTZ

Another Champions League night, another moment when Batigol left TV viewers scratching their heads in disbelief.

Anyway, there was no blame attached to the old ground here. In fact, it’s hard to find anyone at fault.

Jorg Heinrich bursts forward from midfield and feeds the ball to Fiorentina’s No.9 on the right edge of the area. Nigel Winterburn’s got him covered, like he’s had most things covered during 20 seasons as a professional footballer.

Even when Batistuta quickly shifts his feet to open up a yard, he’s not that bothered. You see, whilst Nige might not be a mathematician, he knows every square centimetre of the penalty box.

And you don’t need to have read the works of Pythagoras to realise that anyone shooting from that angle is wasting their fucking time. Especially with Big Dave Seaman in goal.

It’s the sheer speed that makes this goal so incredible. It defies the conventions of time and space, whistling past the Arsenal keeper’s moustache and into the top corner. In some respects, this is the very essence of Batigol: finding the smallest of spaces and driving a tank through it.

💜 #OTD in 1999 at Wembley Stadium…
🚀 An unstoppable drive from Gabriel Batistuta! 🔥