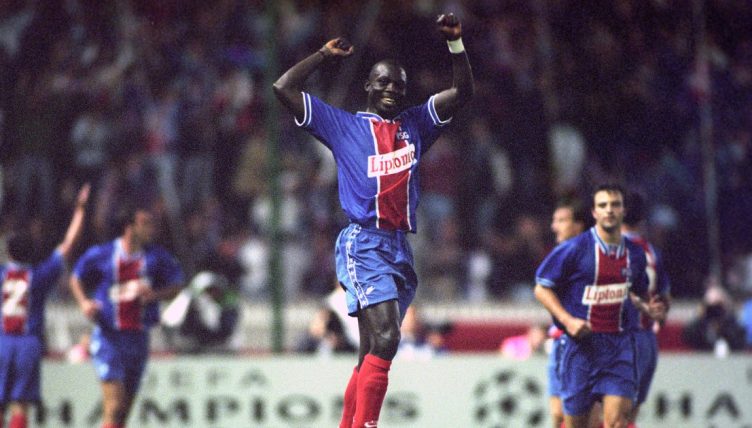 Before he moved to AC Milan and dominated Serie A with the Rossoneri, George Weah was a legend of Ligue 1.

The future President of Liberia matured at Monaco under Arsene Wenger before a prolific spell at Paris Saint-Germain, where he won the league and cup.

But it was in the Champions League where the reputed distant cousin of Ali Dia (in the same way that SuperTed had some sort of extra-terrestrial lineage to Kal-El) scored his most memorable goals.

And there was a particular three-week spell in 1994 in which Weah was absolutely untouchable.

This goal starts innocently enough. A hopeful ball over the top. A footrace between attack and defence. Weah gets there first and squares up the full-back, with another Russian en route to help his comrade.

There’s a code of ethics that most forwards understand when faced with two opposition defenders: you don’t hurt us, we won’t hurt you. Greece and Cyprus used to have the same agreement at Eurovision.

The code dictates that the forward may make a token attempt at creativity – perhaps an achingly unimpressive stepover, or a half-hearted feint to cross the ball – but order will be restored and said forward will wait for his team-mates to arrive and play backwards or square. It happens countless times per game, at every level.

It’s a sign of common decency among professional footballers. Only Weah is a man happy to defy convention. He’s made it to the height of his career the hard way and he’s going to enjoy himself while he’s here.

Just a few years earlier Weah was balancing football with a full-time job as a switchboard technician for the Liberia Telecommunications Corporation. You wonder if he displayed the same disdain for the rules there:

“Good afternoon, you are through to Liberia telecommunications. This is George speaking. How may I help you?”

“Hi George. I wonder if you can help me. The signal on my landline keeps dropping out. I think we need a repair…”

“Have you tried plugging it into your toaster?”

“Have you tried plugging the phone into your toaster?”

“Yes, while standing in the bath.”

“Better to die on your feet than live on your knees, my friend. Good day to you.”

Back to the night in question at the Parc des Princes, and Weah’s balletic feet are doing critical damage to the Russian defence.

A sensational shimmy leaves the right-back stumbling on all fours like a drunk making a vain attempt to save a fallen kebab. And there’s more to come.

Keen to rescue his team-mate’s plummeting self-esteem, Spartak’s central defender flies towards the PSG man intent on sending his shinbone halfway to Le Louvre. Unfortunately, another sharp turn leaves him hurtling in the wrong direction while Weah slots the ball effortlessly into the corner.

It’s the calmness of the finish compared to the frantic footwork that precedes it that makes this goal all the more extraordinary. Weah’s brain is operating at the extremes of the mind-muscle connection, moving his feet and limbs at high cadence, yet slowing his heart rate to a clinical crawl in the moments that matter.

It’s the 26th anniversary of two George Weah Seeya Laters sending Spartak’s defence out for a pie and a pint at the Parc Des Princes.

This is the beast to balance out the beauty of the above. Faced with the proverbial two banks of four, PSG are moving the ball rapidly to open up space in front of goal. There is a swift interchange of passing that gives Weah the briefest glimpse of goal still some 25 yards out.

As a wizard of the dribble, you fully expect Weah to weave another of his mazy spells. Instead he opts for more primal means: blunt force trauma.

In order to generate the most immediate power, the Liberian striker deploys a weapon rarely seen at the upper echelons of European football: the toe poke. In the 90s this technique was the preserve of the school playground, where steel toe-capped Doc Martens could propel the ball at high velocity towards the desired target.

It’s rare that worlds of fashion and football collide so effectively. DMs were firmly the shoe of choice for the grunge crowd yet could operate equally acceptably as makeshift football boots. Sadly, the reverse didn’t apply. You’d look a right prick going to a Nirvana gig wearing a pair of Puma Kings.

Anyway, in this instance, none can argue with its effectiveness. The sheer trajectory of the strike makes this finish an aesthetic delight, particularly from the reverse angle. The ball positively arrows into the corner whistling past the nose of Spartak’s keeper who has just caught the faintest whiff of greatness.

Some 27 years on this remains one of the all-time great Champions League goals. By this stage of the season, Bayern, under new coach Giovanni Trapattoni, are unbeaten at home but flattering to deceive in the league.

The game at Munich’s Olympiastadion is petering towards a fairly tepid draw, like many during the Italian’s brief tenure, when Weah intervenes.

As solo goals go, this has all the hallmarks of a classic. There is one main protagonist bulldozing through his opponents, leaving bodies strewn in his wake as he hones in on the target. All of which sounds like the original pitch for Terminator.

In fact, you wonder if even the boffins on the night shift at Skynet could have perceived a specimen as magnificent as this. He’s blessed with close control, speed and balance that goes beyond the traditional boundaries of human capability.

From Bayern’s perspective, this goal is made more galling by the reputations left in tatters on the turf. These aren’t a few token extras at the Tech Noir. These are seasoned pros at the highest possible level.

Between them Lothar Matthaus, Jorginho, Mehmet Scholl, Thomas Helmer and Oliver Kahn will accrue over four hundred international caps. They might as well flush them all down the gold-plated khazi at FIFA HQ for all the respect they’re afforded here.

They can console themselves at least that they weren’t Weah’s only victims. Within 12 months the Liberian is the reigning World, European and African Footballer of the Year. Sometimes there’s nothing you can do.

Vintage Weah. He turned Bayern inside out here 😎 pic.twitter.com/DVZ0eMpja5

READ NEXT: A forensic analysis of George Weah’s wonderful solo goal against Verona