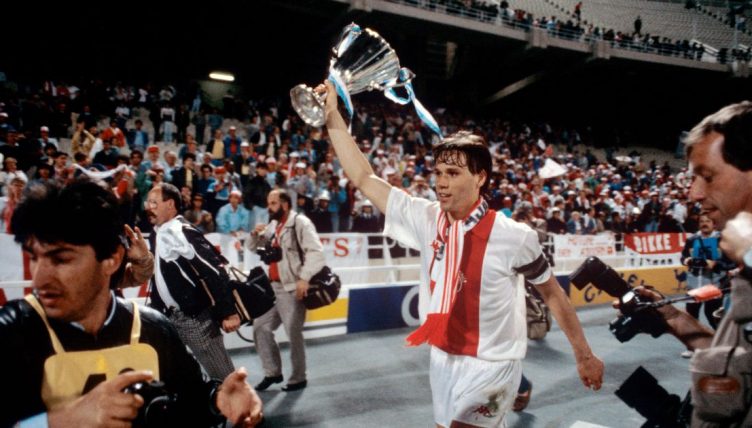 Before Marco Van Basten joined AC Milan and began scoring outrageous volleys from impossible angles, ridiculing the best players in the land and collecting trophies galore, he was a precocious teenager at Ajax.

It was at the De Meer Stadium that the young marksman learned his trade, mainly by scoring outrageous volleys from impossible angles, ridiculing the best players in the land and collecting trophies galore.

All in all, he netted 154 goals in 174 games for Ajax. Here are five examples of a young Van Basten doing what he did best.

At this point in his career, Van Basten is chasing lost causes and generally making a nuisance of himself.

First, he hassles the Feyenoord defender into a mistake. But young Marco’s not done there. Not by a long shot. Yes, he’s embarrassed his foe but now he wants to steal his dignity and grind it into the dirt.

The defender makes an instant attempt to wreak his revenge like any experienced pro would: by kicking the cocky little bastard into the stands. His wild swing of the boot finds nothing but air, leaving the Ajax striker one-on-one with the onrushing goalkeeper.

He then produces a dink weighted so perfectly that it both eludes the Feyenoord custodian and gives the covering defender the faintest glimmer of hope that he can intervene, hope that is finally extinguished when he finds himself nestling in the net with the ball beside him.

The icing on the cake is the triumphant skip of celebration whilst the ball is still in the air. It’s the gesture of a young talent who’s realised: “I’m good at this. I’m really fucking good at this.”

FORGOTTEN GOAL: 36 years ago today a young Marco Van Basten did this vs Feyenoord.

Win the ball, beat the man, dink the keeper.

This is a move that shows Van Basten at his balletic best. Gracefully evading two defenders at speed before zinging a finish into the bottom corner.

The celebrations of the local constabulary are what really top this goal off. If those men and women had any kind of respect for law and order, they’d have put Van Basten in chains, shoved him in the meat wagon and given him a good shoe-ing.

All manner of crimes are being committed here. Careers are being ended before their eyes. Egos are suffering life-altering injuries.

Instead the boys in blue stand and applaud. It’s a harsh lesson. Yes, the law is there to protect us. But even the most vulnerable need to accept the cruelty of human existence: Sometimes life just kicks you in the balls.

Once again, Van Basten has wandered deep into midfield. At this point, it’s hard to work out what position he’s playing. There are no team-mates around him, no semblance of formation. Maybe they’re in the dressing room already. “Marco’s got this one covered, lads. Let’s get in there before the bubble bath runs out.”

A pre-requisite for any iconic solo goal is that at least one defender must be left on his backside. As such, Volendam’s number six is the real hero here. Were it not for his sacrifice, we might have been robbed of one of the most aesthetically pleasing individual goals of the 1980s.

Like an indecisive voter in a swing state, Van Basten lurches from right to left in the blink of an eye, leaving the afore-mentioned midfielder in his wake. The centre-backs realise their fate and inch towards their assailant with all the courage of a snail crossing a dual carriageway.

Before either man can muster up the cojones to commit to a challenge, Marco has punished them for their indecision. This time it’s his left foot that delivers the verdict. A chip sails over the keeper’s head into the stanchion. Sensational.

When Marco van Basten did this for Ajax vs Volendam.pic.twitter.com/CPLwRuzVvd

When Van Basten receives the ball, he has no less than three defenders on him. Frankly, he’d have found more space if he was stood in a phone box next to The Incredible Hulk.

Still, he manages to evade them courtesy of a sharp left turn, then followed by two sharp rights. If you did that in my house, you’d end up in the utility room.

Of course, where Van Basten ends up is with a sight of goal. This time there’s no subtlety. It’s straight down to business. A scorching drive arrows into the top corner.

It’s 33 years to the day since Marco Van Basten did this vs Bursaspor.

Sends three defenders out for a Bovril, then hits the top corner.

This is one of the rare occasions when Ajax work the ball wide. As a cross comes into the box, you expect Van Basten to do the decent thing: perhaps nod it down to team-mate or control it on his chest before trying a shot on the turn.

What you don’t expect is for him to launch himself into the air and unleash the most glorious scissorbastard since records began.

Watching the finish in slow motion, you feel like a teenage boy judiciously using the pause button during an episode of Baywatch in the 90s. What you’re seeing defies the laws of physics. It is rancid, rotten filth. And with each viewing, you feel slightly more unclean.

This might not be the most famous goal of Marco van Basten’s career, but it’s an absolute belter nonetheless.

This one came not in the Euros, but in the Eredivisie against Den Bosch in 1986. It’s so good.pic.twitter.com/tWV9ZPjpvc

READ NEXT: 10 of the best goals scored from impossible angles: Van Basten, Kanu…