The Highlight Reel: Roberto Baggio raging against the dying of the light 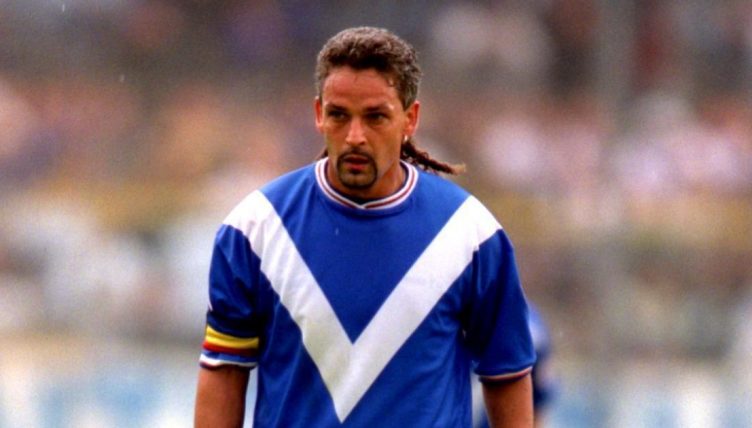 Roberto Baggio. You remember him. Il Divin Codino and all that.

When The Divine Ponytail rocked up at Brescia in 2000 he was 33 years old and carrying the battle scars from 18 years of Italian defenders getting stuck in.

The hair had turned from black to grey, and injuries rendered his knees about as structurally sound as a packet of Twiglets. Most players in that position would be thinking about putting on their flip-flops and heading for the sunset. But Baggio knew that there was still a bit of magic left in those old boots yet. And he was right.

Death, taxes, Roberto Baggio nonchalantly pinging a free-kick into the top corner. Football is a game predicated on chaos so it’s heart-warming that there are still some things we can rely on as certainties.

This goal has all the hallmarks of a traditional Baggio set piece: defenders bouncing anxiously beforehand (no less than six of them in a Udinese wall that can hardly be accused of over-confidence), a despairing dive from a keeper who was sure he had his angles covered, and then a petulant boot into the net once the goal’s been conceded.

The latter is what makes this – Baggio’s last direct free-kick goal in Serie A – all the more enjoyable. It sums up that feeling of utter helplessness. The pain of knowing exactly what’s coming, and there’s precisely nothing you can do about it.

When the Udinese right-back wallops the ball, he’s doing it not just for himself but for the hundreds of defenders and keepers that have suffered the same fate over the years:

“For fuck’s sake. Why hasn’t he retired yet?”

By this stage of his career, there wasn’t a lot left on Baggio’s to-do list. He’d played for Italy’s biggest clubs, he’d been capped 56 times by his country, he’d even managed to spare the blushes of Diana Ross at USA ’94.

Then he comes up against Lecce in 2001 and finds an opportunity too good to resist. Taking a corner early in the second half, Roby weighs up his options. The first and most straightforward choice is to drop it in the mixer where tall striker Igli Tare is waiting to stick the nut on it. The problem with this scenario is the Albanian’s rather dismal goalscoring record that season. Four in 16 doesn’t really inspire confidence. We might need a Plan B here, fella.

Then he notices an opportunity. Lecce’s goalkeeper seems to have monetarily lost all sense of time and space. He’s wandering around his six-yard box like a middle-aged man casually perusing the drill section at Homebase. To take advantage of the moment, Baggio is going to have to get enough height on the ball to elude the defender on the near post, and enough whip so that it beats the keeper scrambling to cover his bases.

He does both. Because he can. Then celebrates with his arms outstretched, soaking in the acclaim of his adoring public.

By 2003 Baggio was being paired up top with Luca Toni. You could understand the thinking behind the partnership. Big Luca wasn’t necessarily the most technically gifted, but if you didn’t keep an eye on him, he could cause a lot of damage. Which sounds a bit like the scouting report on King Kong.

Anyway, with opposition defenders occupied elsewhere, Baggio enjoyed precious extra space to weave his spells. And this goal against Atalanta is a prime example of Brescia’s Odd Couple working in perfect harmony.

It starts with a cheeky outside of the boot pass into space by Baggio. Toni lumbers after it like a hippo chasing a sausage roll, bundling the defender to the floor before toe-poking the ball back to his strike partner.

Baggio’s first touch, in fact his only touch, is exquisite. He floats a chip up and over the keeper like he’s pitching to the green at Augusta. Delightful.

This is Italian football’s Back to the Future moment. A meeting of two generational talents at opposite ends of their footballing life cycle, combining perfectly to produce an event of historical significance.

The ball is picked up in midfield by a young Andrea Pirlo. We know that he will go on to age like a fine wine, but these are most definitely his Lambrusco years. He is 21 years old, clean-shaven and has just a handful of Serie A appearances under his belt.

Pirlo looks up and spots his No.10 making a move off the last man. The pass has to be inch-perfect. He knows that Baggio is slower than a goldfish in treacle. If he misjudges the distance by a fraction, the veteran forward won’t be able to reach it. Thankfully, it hits the mark.

What happens next is one of the all-time great first touches in association football. As the ball drops over his shoulder, Baggio traps it and rounds the keeper in one astonishing feat of biomechanics. In terms of sheer technique, it might be the single greatest goal of his career. What’s more, he’s done it in his 19th season, contravening everything we know about the space-time continuum.

Great Scott! What a player. What an incredible player.

It's Il Divin Codino's birthday, so here he is latching on to an Andrea Pirlo pass and ruining Edwin van der Sar's life with a perfect first touchpic.twitter.com/C45QvZgxXA