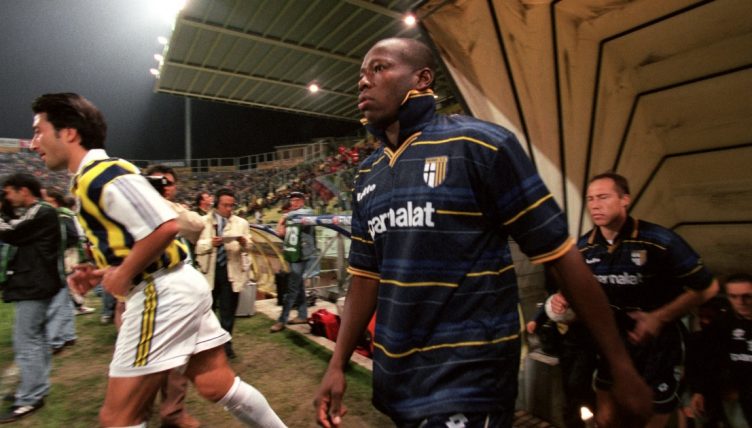 Tino Asprilla was a whirlwind of chaos and creativity, who flourished in the lawless world of ’90s football. Trying to coach the Colombian was a thankless task: like teaching a penguin to play snooker.

Asprilla arrived in Serie A in 1992, signing for Nevio Scala’s Parma after two prolific years with Atletico Nacional in his homeland. There were doubts about how the young striker would adapt to the most tactically astute and defensively-literate league in the world.

He smashed it. In three full seasons at the Ennio Tardini, Asprilla became a cult hero. Here are just a few reasons why.

When Fabio Capello’s Milan side hosted Parma in springtime 1993, the Rossoneri were in the midst of a 58-match unbeaten run. Their success was built primarily on a defence so miserly it could have been sponsored by Ebeneezer Scrooge.

Marshalled by the magnificent Franco Baresi, the unit of Paolo Maldini, Mauro Tassotti and Billy Costacurta comprised the best back four in the world. And with names such as Rijkaard, Gullit, Savicevic and Van Basten to call upon in attack, it’s no surprise that teams were broken mentally before the first whistle – and beaten physically by the last.

In hindsight, Scala’s Parma were the ideal side to buck that trend. Playing their own brand of fearless, attacking football they sneered at Serie A’s bloated reputations. They’d finished third, a club record, the previous season and a springtime trip to the San Siro offered them further opportunity to show their talents.

The game is decided in the 58th minute when Parma win a free-kick 25 yards from goal. Milan ‘keeper Sebastiano Rossi, a man who kept his sheets cleaner than the Quality Control Officer at Persil, baulks at the idea that Asprilla would shoot from there. But shoot he does. And Rossi watches helplessly as the ball nestled into the top corner.

Milan’s record is finished. Whereas Tino Asprilla is just getting started.

What makes this goal special is Asprilla’s transformation from zero to hero in the space of seconds.

Parma’s left-back has powered into the box and provided a textbook delivery into the much-vaunted ‘corridor of uncertainty’ between goalkeeper and defence. He’s served it on a plate for the onrushing striker, and all Asprilla has to do is gobble up the opportunity for the simplest of tap-ins.

Incredibly, at the precise moment the ball arrives at his feet, Asprilla loses all motor control of his right foot. Instead of stroking the ball into the gaping goalmouth, he manages to trap it under his heel. It’s an almost impossible miss.

Fortune is smiling on the Colombian though, and he gets an immediate chance to make amends, only to cannon his next effort off a desperate defender. By the time the ball rebounds to him for a third opportunity, the Parma striker is facing away from goal with his tail tucked firmly between his legs.

At least it should be. Any self-respecting professional footballer in the same situation would lay the ball off to a colleague, hoping that a belated assist would mask his momentary mishap.

What happens next serves as irrefutable evidence that Tino Asprilla is blessed with far deeper reserves of confidence than his fellow man. As the defence masses around him, he begins an impromptu game of keepy-uppy before scissor-kicking the ball past a shell-shocked keeper.

It’s the equivalent of dropping your Academy Award at the Oscars, bending down to pick it up and unwittingly exposing your bare arse cheeks to a global audience of millions, before casually moonwalking off stage left whistling Star Spangled Banner.

You have to say that’s magnificent.

If at first you don’t succeed, try again…

With an overhead kick…

When Sensible Soccer first arrived on our Amigas and Commodore 64s in the early ’90s, it promised gameplay like nothing we’d ever seen before. And it delivered.

The charm of the game was these tiny little men with their tiny little legs producing extraordinary acts of sorcery, which sounds like a pitch for Shaun Wright-Phillips’ new magic show.

This Asprilla goal suggested that perhaps the gameplay isn’t as far-fetched as we imagined. A Parma break finds him on the right-hand side with the opposition left-back in close proximity. The standard procedure here is for the attacker to burst down the outside and cross the ball into the box for his fellow forwards.

However, Asprilla showed the same sort of disdain for collaborating with strikers as Margaret Thatcher did at the coal mines in the 1980s. Parma’s No.11 unleashes a shot with such devastating whip and curl that it seems destined for the corner flag at first, only to swerve violently into the roof of the net.

It’s 27 years to the day since the ball sat up nicely for Tino Asprilla vs Inter and he said:

This is another goal that goes against all accepted norms of the professional game. Asprilla drops short to take a pass from midfield and presumably link play to a colleague in a better position. So far, so Tony Cascarino.

However, what happens next seems about as unlikely as Iain Dowie finding part-time work as Brad Pitt’s stunt double. Asprilla controls the ball deftly with this right instep, flicks the ball up on his right knee, swivels and smears a left foot volley into the net.

It’s the sort of goal that some 26 years later will send a chill down the spine of football’s leading data scientists. It’s the exception to the rule. The flaw in the machine. It’s Neo running around The Matrix spin-kicking lumps of shit out of your automated algorithm.

And yet, it’s typical Tino. Taking on the sort of odds that 99.9% of his peers would never dream of. And doing it with the carefree abandon of a man who’s just popped to the newsagent in his pyjamas to pick up a packet of ciggies and a paper.

What a player. What an extraordinary player.

Right, one ridiculous goal every day until the football comes back.

TRY A QUIZ: Can you name Newcastle’s top 30 goalscorers in Premier League history?