The joy of Ceefax: Remembering 3 of the greatest things about p302 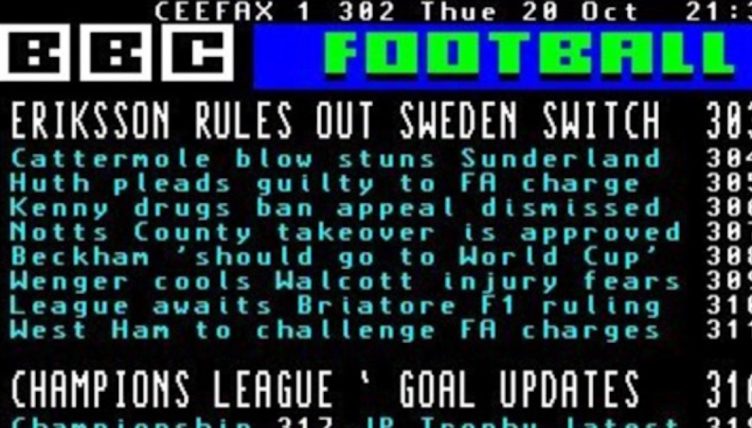 Ceefax is nearly 50 years old, and though it has long since been replaced by rather more modern media, @Sid_Lambert still misses the glory days of page 302.

It was 2012 when we waved goodbye to Ceefax. Long before the advent of swiping, our thumbs would fill many a dull hour by hitting the text button and tapping in 302 on our telly remotes. It took us to a treasure trove of football stories in 80 words or less.

It was bloody brilliant.

It must be tougher than ever to be a football journalist. Express an opinion and you’re called a c*nt in 280 characters (or considerably fewer). Quote an anonymous source and you’re called a fraud. Interview a player and you’ve got to negotiate every last syllable with a PR rep who’s more paranoid than David Icke in the reptile section of London Zoo.

In the 80s and 90s, with no transfer windows to ruin your fun, idle speculation was the perfect page-filler. There were no sources of information available to the general public. Stories could be nicked off Clubcall (on the proviso that you could claim back the 49p per minute on expenses).

Or, if you were really struggling, you could throw any old bollocks together and people would read it. How else would we have gotten such gems as Gabriel Batistuta going to Ipswich Town? Roberto Baggio arriving at Loftus Road? These were innocent times.

Unfortunately, we didn’t get newspapers at my house unless they were left behind by the occasional visits of the plumber.

It was bad news for the family, as it meant we were fucking freezing when the boiler – too expensive to replace in the days of 16% interest rates and Poll Tax riots – had died on its arse again.

But it was good news for me. The plumber was a staunch Sun reader, which meant not only did I get to read through the most fantastical of football transfer gossip, but I could also sneak a peak at Linda Lusardi’s knockers. Lovely stuff.

Those glorious occasions aside, Ceefax was my sole resource for transfer news. It felt like an arbiter of truth in a world of fantasy. I might hear a playground rumour about another exotic new arrival to the top flight, but it was only when it appeared on Ceefax that I allowed myself to believe.

Like the day Arsenal signed Dennis Bergkamp, for example. Much to the disgust of Stuart Pearce, as you can see. 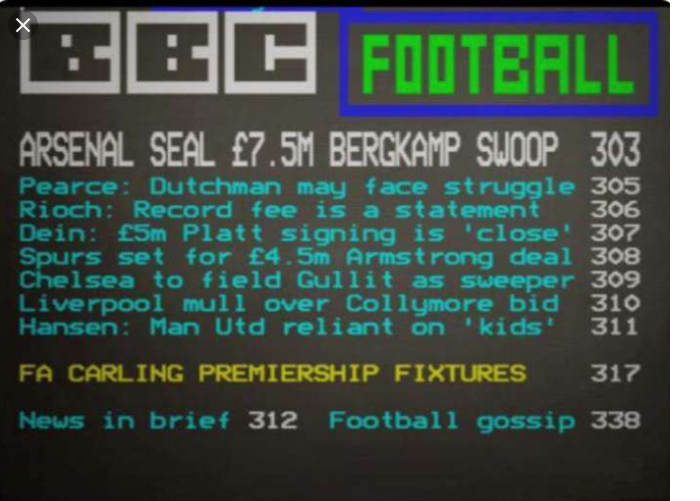 In the days before Jeff Stelling, my matchday routine was a celebration of 90s multimedia in all its glory. It was a precise agenda honed over years of trial and error.

3pm: Ceefax on the telly – with the sound muted down – displaying the latest scores. Meanwhile, the radio was tuned to 5 Live, with match commentary and around-the-grounds coverage as goals went in.

3.45pm: we returned to Grandstand as Steve Rider calmly directed traffic from reporters around the country, provided the bastard Rugby League hadn’t overrun of course.

4pm: Back to Ceefax and radio for the second half. It was occasionally nerve-jangling stuff. A goal might appear on Ceefax, but there would be no official word on the radio. Was it a goal? Was it a mistake? Seconds seemed like minutes, minutes seemed like hours. The joy of celebrating a goal paralysed by fear of an administrative error. That’s what it was like when you relied on such backward technology. Thankfully these days we’ve got VAR to do that for us. 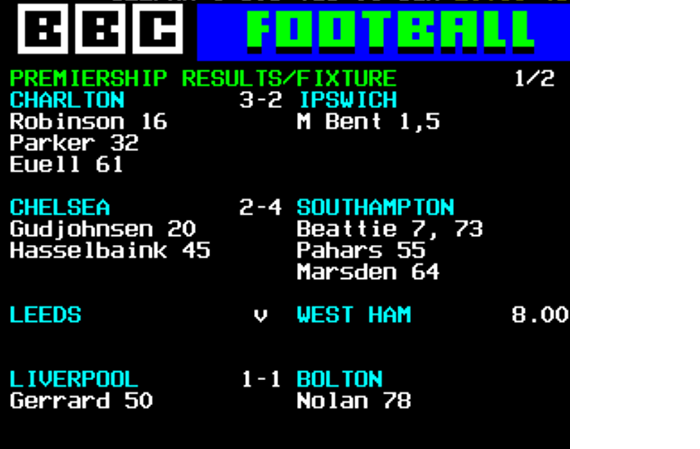 4.39pm: An all-important double substitution as Ceefax and Radio 5 gave way to was given a well-deserved breather while Rider and the Vidiprinter brought us the crescendo of the day’s play.

5pm: Time for the match reports, waiting for Ceefax’s finest authors to sum up 90 minutes of sheer hell in 80 words or less. It was an extraordinary skill. The enemy of any writer is his word count, but doing justice to, for example, a six-goal thriller within that sort of storytelling limit is a near-impossible task. Equally, when some games were so horrifically fucking awful that task could seem as colossal as translating the Old Testament.

Which brings me to my favourite Ceefax match report of all time. 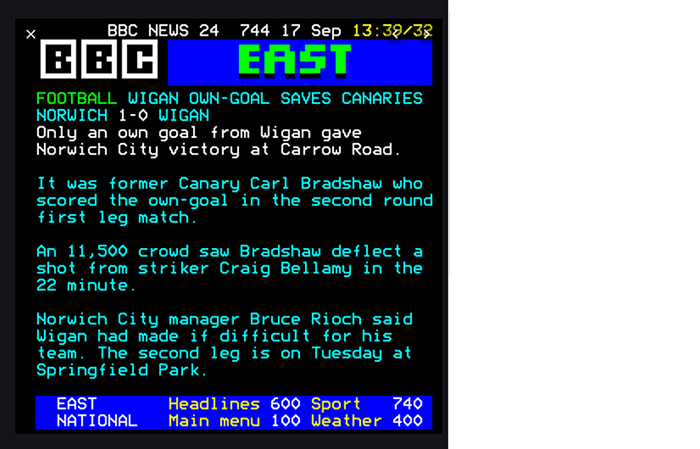 Bloke had a stinker; his team lost. Simple game, football.

But it wasn’t just me who found out the headlines via the buttons on their remote control. Players and managers did too.

Take Bruce Rioch, for example. The then-QPR boss was allegedly sitting at home one afternoon in 1997 watching coverage of Louise Woodward’s trial on telly – it says something about the dire state of Rangers’ season that a murder trial was blessed relief from matters on the pitch – when he made a cursory flick onto Ceefax.

Before he could even head to p312 for the news in brief, a headline caught his eye: He’d been sacked. And nobody from the club had told him. At least he hadn’t rung Clubcall. That would have cost him half his dole money.

There was occasionally good news too. Underdogs Wycombe Wanderers were hit by an injury crisis ahead of their 2001 FA Cup quarter-final with Leicester. Poorer than a church mouse, the club’s options for a replacement were severely limited, so they took the unusual step of sending a press release to Ceefax in the hope of finding a new striker. The criteria were simple: physically fit, raring to go, and be available for next week’s game at Filbert Street. It was only a diary clash that ruled out Mr Motivator.

In the event, it was Roy Essandoh who tried his luck. After a quick trial the unheralded non-league striker signed terms just in time for the big game and made a fairytale impact by scoring the winner from the subs bench.

These were the moments that made Ceefax so special. Happy Birthday, my dear old friend. Gone, but never forgotten.

21 things everyone that played football as a kid will remember