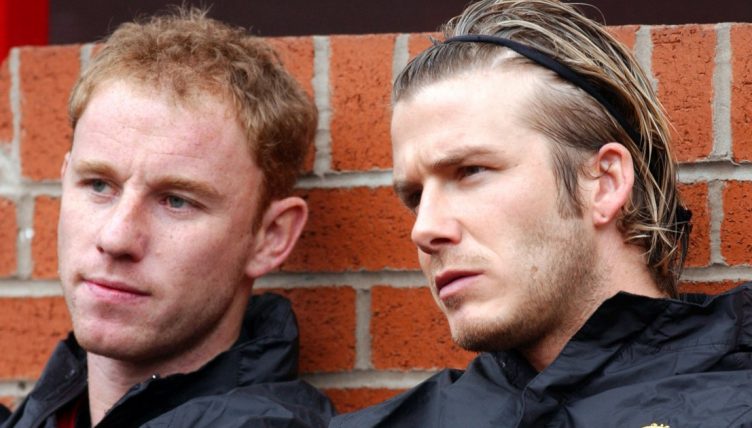 In 2010, Nicky Butt came out of retirement aged 35 to play in Hong Kong. For some reason, he was given set-piece duties and the captain’s armband.

“I am not going to lie: I have not been studying the Chinese League or Hong Kong for many years. It is all new to me.”

When Nicky Butt announced his intention to join South China AA in the Hong Kong First Division, his appraisal was as honest as it was unsurprising.

Having retired from football in May 2010, Butt performed a U-turn in November, grasping at one final chance to do “something new and exciting” before hanging up his boots for good.

That something exciting? Linking up with the oldest team in Hong Kong, of course.

“I wanted some time out of the game to concentrate on my next step, either in or out of football,” Butt said at the time. “However, I feel fit, and when South China approached me to join them for a week’s training and a game, the prospect excited me.”

Planning to live in the UK and fly to Hong Kong for matches, Butt considered the challenge worth his time — though rumours of a £200,000-a-week wage were quickly dispelled by the former England international.

“If it was that amount of money I would be signing for four years, not three months!” he quipped.

Whatever the salary, South China thought they were getting a good deal on the 35-year-old midfielder, who had recently been kept out of Newcastle’s Championship-winning team by Danny Guthrie.

“It’s not a gamble,” insisted South China’s chairman, Steven Lo. “We will be playing three [continental AFC Cup] games at home next year and if we draw a capacity crowd of 40,000 at the Hong Kong Stadium we can expect to break even.

“An average ticket for a game is HK$60 and, if we have a full house, we should get ticket revenue of around HK$2million per game, which is enough to cover his costs.”

A failsafe plan, then.

“I don’t know why other clubs don’t follow suit and get players who can hopefully take them into the big leagues,” added the confident chairman.

Butt was given accommodation at the Grand Hyatt hotel, described by the New York Times as a “world-famous prestige property”.

When Butt featured for South China a week after his move was confirmed, he enjoyed a debut to remember.

Wearing the No.12 shirt — No.8 was taken by a midfielder named Xu Deshuai — Butt started the match in his familiar central midfield role, but in highly unfamiliar surroundings.

8,000 fans turned out to watch the game, filling approximately 20% of the stadium, which may have disappointed the home side’s chairman.

For Butt, however, there was little to be disappointed about.

Opponents TSW Pegasus took the lead early in the second half, but in 65th minute, Butt exercised his seniority and took control of a free-kick near the corner of the Pegasus penalty area.

Like an unpopular sixth-former entering university, Butt totally reinvented himself in that moment, casting aside his ‘third-choice central midfielder’ past, burying the ghosts of that overhead clearance, channelling the player he had always wanted to be: David Beckham.

His free-kick sailed into the far corner past a gobsmacked Li Hon Ho.

Unfortunately, that thrill got to Butt’s head, because just five minutes later, he grabbed control of another dead ball — this time a penalty kick. Channelling his inner Ruud van Nistelrooy, the midfielder dinked the spot-kick onto the crossbar.

Momentarily forgetting the rules, the humbled emigre tried an acrobatic volley straight from the rebound, a transgression that was immediately penalised with a free-kick to Pegasus.

South China scored a late winner, sparing the blushes of the Gorton-born enforcer.

Butt featured in two further league matches for South China. The first of those, a 0-1 home defeat to Tai Po, came two months after his eventful debut. It was Butt and Kezman’s first match together, but the dream team could not summon a goal.

The next (and last) was another defeat, this time away at Kitchee, whose transfer strategy, different to South China’s, involved signing Spanish players the right side of 30.

Butt received a straight red card for kicking out at an opponent, and Kitchee, 2-0 winners on the day, eventually pipped South China to the title by a point.

And South China’s adventure in the AFC Cup — a secondary continental competition offering a route into the AFC Champions League — did not go much better.

Butt made five appearances in the competition, but his side won just one of their group games, edging past Kingfisher East Bengal courtesy of a Kezman winner.

Some consolation was afforded to Butt, however, as he wore the captain’s armband that match.

Though perhaps the highlight of Butt’s spell in Hong Kong — if not staying at the Hyatt — came in the Hong Kong League Cup final, where South China once again faced TSW Pegasus.

Incredibly, the former United man scored another free-kick, albeit a very jammy one that was both deflected and fluffed by the goalkeeper. (Li Hon Ho again, yeah.)

South China won 2-1, and Hong Kong’s third most prestigious trophy was theirs.

It would be Butt’s last piece of silverware as a player.

And since chairman Steven Lo’s calculations were based on selling out the massive arena, it’s probably safe to deduce that the club did not “break even” on Butt.

Failure to qualify for the following season’s AFC Cup would have hurt the club’s purse even further.

All in all, the unusual transfer was not a huge success. But then again, would a peak Nicky Butt have had much greater an impact? Can one defensive midfielder man-mark his team to glory? Was it silly to present such a conservative player as a marquee signing?

For all his faults, Kezman at least scored seven goals that season.

It’s possible that South China simply got swept up in ‘Class of ’92’ hysteria — that odd brand of nostalgia that tries to reshape Butt, a good-but-not-great Manchester United player whose career declined quite sharply from the age of 28, into someone who can be mentioned in the same breath as Beckham, Giggs and Scholes.