The last goodbye: When mid-30s Ronaldinho cemented his legacy 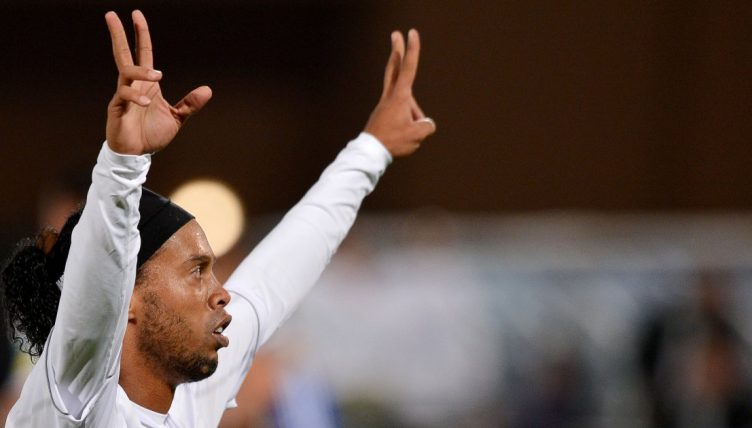 With Ronaldinho on a mission to destroy both his legacy and his fortune, it’s very easy to forget his brilliant late-career renaissance in his native Brazil.

Promising world-changing football projects and charity initiatives, the RSC was set to go on sale in August 2018. As of today, however, the listing of the digital currency remains delayed.

“Please be rest assured that the project is making progress,” organisers said in April 2019.

You can read all about the Ronaldinho Soccer Coin here, complete with pictures of its strangely residential-looking headquarters in a Maltese suburb.

But you don’t really need to.

The RSC has been, quite obviously, one of several career missteps taken by Ronaldinho since his heyday at Barcelona.

His AC Milan adventure had its ups and downs, his international career diminished earlier than expected, and many observers have — with some justification — rued the wasting of one of football’s greatest talents.

Things have hardly improved for the former player in recent times. In November 2018, reports circulated that he was on the verge of bankruptcy.

Occasionally lost in the madness of Ronaldinho’s life and career, however, is his last great hurrah in the game: a two-year spell with Atletico Mineiro in Brazil that reaped trophies and personal honours of the highest calibre.

At 33, the Brazilian legend was the best player in South America.

Forget the cryptocurrency. Forget the bankruptcy. Forget, if you can, the far-right politics. Ronaldinho’s swan song in Belo Horizonte did complete justice to his brilliant career.

From Rio to Rooster

When Ronaldinho signed for Atletico Mineiro in June 2012, he didn’t have to travel very far.

For the previous year and half, the playmaker had been contracted to Flamengo in Rio de Janeiro. A dispute over payment, however, had turned the relationship sour.

So Ronaldinho took a 200-mile journey northwest to Belo Horizonte, where Atlético — known locally as ‘Galo’ (Rooster) — were only too happy to pay his wages on time.

“He is not just any player; he is Ronaldinho,” said club president Alexandre Kalil. “I have a reputation as a madman, but I am not mad enough to turn down the chance to sign Ronaldinho.”

And there began the final chapter of the legend’s career.

Ronaldinho went straight into the Atlético team and helped the club to the top of the 2012 Brasileirao within five games.

Eight assists in his first 18 starts proved key to his side’s form.

Goals were less forthcoming for the World Cup winner, but a trademark solo goal against Cruzeiro showed he could still do the business when it mattered.

When Atletico Mineiro went to Cruzeiro in 2012, Ronaldinho wasn't very kind to those poor centre-backs.pic.twitter.com/WwOS8Cc2P9

In the end, however, Ronaldinho’s contributions — which earned him the ‘Bola de Ouro’, the league’s player of the season award — were not enough.

Despite scoring a hat-trick and providing two assists in one majestic game against Figueirense, the playmaker could not prevent Atletico from slipping behind Fluminense, who eventually won the league by five points.

Just over a year after Atletico’s disappointing end to the 2012 Brasileirao, journalists across the continent named 33-year-old Ronaldinho as the 2013 South American Footballer of the Year.

It was a spectacular comeback for a player largely written off during his later years in Europe.

The reason for the award? Over an incredible season in 2013, the iconic midfielder led Atletico to victory in the state championship, and then to their first ever victory in the Copa Libertadores — a gigantic and unexpected achievement for a club largely relying on goals from Jo, the former Man City flop.

With that victory, Ronaldinho became only the seventh player to win both the Copa Libertadores in South America and the Champions League in Europe.

It was a mighty run, too.

In the group stage of the tournament, Ronaldinho provided four assists and three goals, including a ludicrous near-post chip in a 5-2 victory over Argentina’s Arsenal FC.

Nor did he disappoint in the latter stages.

In both the semi-final and final, Atletico overturned a 2-0 first-leg deficit to win on penalties, with Ronaldinho crucial in both.

It was the playmaker’s incredible through-ball to Bernard that began the semi-final comeback against Newell’s Old Boys, and his decisive penalty in the shootout that took them to the two-legged final.

“This is why I came back to Brazil,” Ronaldinho said after the dramatic final victory over Paraguay’s Olimpia. “Not long ago people were saying that I was done, but we showed today that isn’t the case. Let them talk now.”

There were many remarkable aspects to Ronaldinho’s stint with Atletico.

The first is that, at 33, and with a reputation for sometimes not taking the game quite as seriously as one should, Ronaldinho actually played a ludicrous amount of football in a short space of time in Brazil.

During the 2012 Brasileirao, the midfielder missed just three games in 35 matches. In the other 32, he was substituted off the field for a total of 13 minutes. In the 2013 Copa Libertadores run, he started every single match and was subbed just once.

Certainly, Ronaldinho was not tasked with much defensive work, but these were intense games in which the midfielder played a central role.

For a player who had been criticised for his weight issues as long ago as 2007, his fitness in Brazil was nothing short of a miracle. This wasn’t a vain victory lap in comfortable surroundings; this was Ronaldinho treating the game — and himself — with the utmost respect.

Another important aspect of Ronaldinho’s Atletico spell was its effect on his seemingly long-dead international career.

After Dunga dropped him for the 2010 World Cup, few would have expected a 34-year-old Ronaldinho to have had the slightest shot at the 2014 tournament in Brazil.

And yet, in 2013, the legend appeared in three friendlies, captaining the Selecao for two.

The World Cup proved a step too far for the ageing star, but to have come even close was an impressive achievement.

Injuries hampered Ronaldinho’s 2014, and Atlético eventually released him that summer. Spells followed with Mexico’s Queretaro and, briefly, with Fluminense, before the World Cup winner moved into a routine of debt, charity matches, crypto and cheerleading for Jair Bolsonaro.

Probably because of those things, it’s easy to view Ronaldinho’s career as a tragic fall from grace.

But it wasn’t — not really.

To lead your team to Copa America glory at 33, and to have been the best player on the continent doing so, is hardly a bad way to mark your autumn years.

Ronaldinho will always be remembered for his magic at Barcelona, but his heroics with Atlético should never be forgotten.