The last goodbye: When a 37-year-old Gianfranco Zola led Cagliari to glory 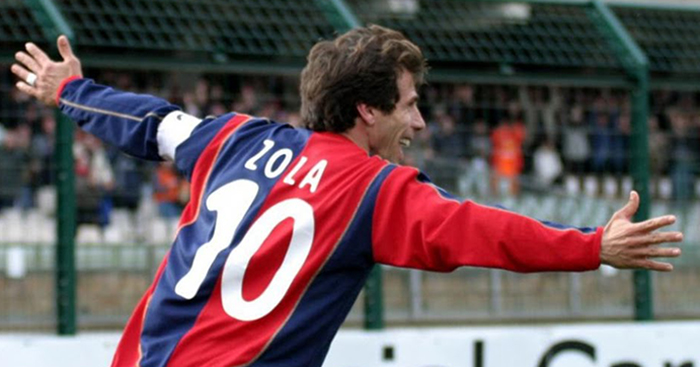 Gianfranco Zola’s two-season spell in his homeland was a textbook football swansong. Things could hardly have gone better.

Towards the end of the 2002–03 season, Gianfranco Zola had decided to bring his time with Chelsea to a close.

He had enjoyed, to the surprise of many, a remarkable rejuvenation over that final campaign, recording his highest ever Premier League goal tally (14) while providing several moments of his usual magic. That lob against Everton was a notable highlight.

When summer came around, however, things got a little more complicated.

Zola, 36 years old, agreed to a one-year deal with Cagliari, the principle football team on the Italian island of Sardinia, his birthplace.

It would be his first action for a Sardinian club since 1989, when he had played for Sassari Torres in the Italian third tier, and a welcome return home for a player admired all the way from Knightsbridge to Nuoro.

But then Roman Abramovich turned up at Chelsea with his bags of cash.

Although Zola had already agreed in principle his move to Cagliari, Abramovich was desperate to keep the club icon around.

READ: A tribute to the wonderful Gianfranco Zola, an unbelievable bargain

“Abramovich sent Zola a fax offering him £3million [per year],” said Massimo Cellino, then president of Cagliari and future scourge of Leeds United. “I have seen it with my own eyes.”

Fortunately for Zola’s admirers in Italy, the Russian billionaire could persuade neither club nor player.

“I got another call from Abramovich on Thursday, this time offering me a million pounds to call off the deal,” Cellino added. “I told him no straight away.”

To this second rebuff, Chelsea’s new owner made one final offer — though it is unclear how exactly he expected it to work. He asked if he could buy Cagliari, the club, in its entirety.

The answer, again, was a no.

Zola stuck with his decision to play for his local side, explaining that his “reputation with the Sardinian people was at stake”.

And that reputation was about to improve tenfold.

First class in the second tier

When Zola made his debut for Cagliari aged 37, the Sardinian club was beginning its fourth season in Serie B, the Italian second tier.

For the last three campaigns, the club had finished in the upper mid-table, largely thanks to attacking talents like David Suazo, a Honduran striker who would later represent Inter, and Mauro Esposito, who would earn six caps for Italy and later sign for Roma.

Zola was therefore signing for a good side but not a red-hot favourite for promotion.

But although few expected glory of the island team, it’s fair to say that everybody was looking forward to seeing the new No.10 in action.

“After so many years abroad, I want to exhibit myself — if we can put it like that — in front of my land and in front of my people,” he told The Guardian in August 2003.

“It’s something I feel a great deal. More than any other thing it draws me, fascinates me, stimulates me.

“Certainly, this is a land where we’ve never been very rich. We’ve never had particular favours. To be able to bring pleasure to people here, as I did in London, would be the maximum, from a professional and, above all, a humane point of view.”

Pleasure? He would bring a whole lot more than that.

Things started in the best possible way, with Zola scoring a trademark free-kick on his debut and a penalty in the next match. Both games were 3-0 victories, taking the club straight to the top of the table.

From that point on, everything clicked: Suazo and Esposito took their goalscoring to new heights, and Zola himself scored 13 times, featuring in all but three matches despite his advancing years.

Finishing second, Zola’s Cagliari were back in Serie A.

That remarkable achievement, however, gave Zola a tough decision to make.

He would be 38 years old for the 2004–05 season, and he had achieved his initial aims with gusto. His reputation was greater than ever, and he had resoundingly delivered “pleasure” to the islanders.

Fast approaching 40, was it time to step aside? to let younger talents try their hand in the vastly more competitive environment of Serie A?

Zola signed a one-year extension, put his No.10 shirt back on, and began his final, final challenge in football.

But what were the targets this time? Survival? Simply letting fans see him in action a little longer? To everyone’s surprise, things just kept getting better for Zola and his local side.

By November 2004, little Cagliari were well and truly putting their Serie A rivals to the sword, with their seasoned talisman playing no small part.

For one especially glorious period, the tiny forward scored four times in three games: a cool penalty against Inter, a neat finish against Lazio and a brace against Chievo Verona — starting with another inch-perfect free-kick.

At this point, Cagliari were soaring in the dizzy heights of fourth place.

Zola would score sporadically throughout the rest of the season, eventually finishing with nine goals in the league and four in the Coppa Italia.

When he did score, though, it was invariably dramatic.

In January 2005, the forward scored arguably — arguably — the most impressive goal of his career.

In the 89th minute, with Cagliari trailing 1-0 at home to Juventus, a hopeful cross was swung in towards Zola, who was darting toward the centre of the Juve box, hoping to get the better of the Juventus defence.

The Old Lady’s centre-backs that day were Fabio Cannavaro and Lilian Thuram, two of the finest players of their generation. The keeper? Gianluigi Buffon.

And so by magic, the five-foot-six Zola leapt as high as he ever leapt, evading Thuram and guiding the ball into the corner of the net, past a furious Buffon, to tie the game 1-1.

As if his swan song hadn’t had enough magic already.

Other fine moments followed. In March 2005, Zola opened the scoring in a 3-0 win over Roma with a long-range (albeit very slow) bobbler of a volley.

Then on the final day of the season, Cagliari’s disappointment with a 4-2 defeat to Juve was offset — if not eradicated altogether — by their veteran forward scoring twice in a half-hour cameo.

The club finished ninth, and Zola ended his brilliant career, almost 39 years old, by helping his side to improbable success: from Serie B also-rans to Serie A giant killers in just two years.

For Cagliari, however, bringing Zola back home was a hell of a good decision.