The last goodbye: When Andrey Arshavin bossed it in Kazakhstan 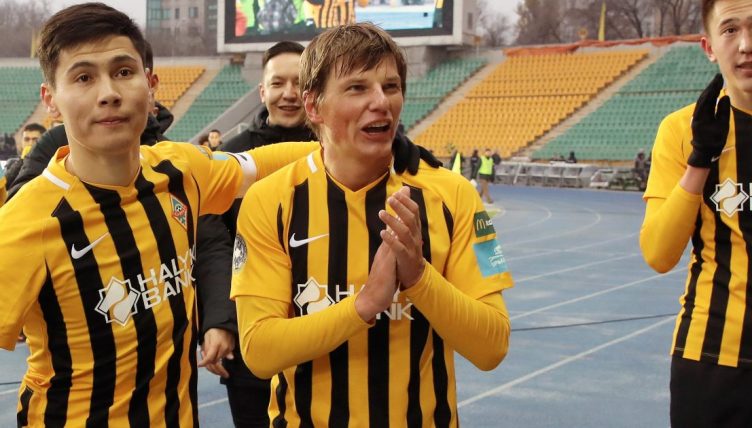 A swan song in Kazakhstan might not sound great on paper, but Andrey Arshavin ended his career with three years of non-stop fun.

If you remember one thing about former Arsenal man Arshavin from 2018, it probably wasn’t his excellent final season in the Kazakhstan Premier League. It probably wasn’t any particular goal or assist, or even his emotional farewell and retirement.

If you remember anything at all, chances are it’s him exiting a St Petersburg strip club on horseback in the early hours of the morning.

Not that there’s anything wrong for having prioritised one story over the other. Back then, Kazakhstan ranked 24th in the UEFA country coefficient, below Scotland and Belarus, and Arshavin’s exploits there were of interest only to the most die-hard Arsenal fans. Strip clubs and horses though? Very funny. Very noteworthy.

Believe it or not though, the Russian’s time playing for FC Kairat was actually quite impressive.

He consistently provided goals and assists, helped his club win the Kazakhstan Cup and boosted attendances wherever he played.

With his career petering out in early 2016 — and with rumours of his imminent retirement after leaving Kuban Krasnodar in Russia — the playmaker with the Playmobil haircut turned what seemed a cynical final payday into an unlikely love affair.

The midfielder had just had his contract terminated by Kuban Krasnodar after less than a season, his arrival (along with that of Roman Pavlyuchenko) little more than a PR move to satisfy club bigwigs.

And that disastrous spell had followed a similarly underwhelming stint back at his first club, Zenit St Petersburg, brought about by the club’s celebrity-hungry owners, Gazprom.

Aged 34, Arshavin wasn’t attracting interest from Europe’s top clubs. Nor even from its middling ones.

“If there is an offer to continue playing, I will definitely take a look at it,” Arshavin said. “If not, I will end my career.”

His potential retirement was discussed in the media, though most observers mourned the wasted potential of years gone by, not the potential loss of the actual, real-life 34-year-old.

Fortunately, an offer did come, and it came from a former acquaintance of Arshavin’s. Aleksandr Borodyuk, formerly Guus Hiddink’s assistant for the Russian national team, was now managing FC Kairat in Kazakhstan, and the club had an opening for a mercurial attacker.

The deal was agreed on 18 March 2016, generating no end of excitement in the city of Almaty.

“Look at Arshavin, they have given him a $1million contract,” complained the politician. “Just think, more than $1million a year…Why isn’t this money spent on children’s sport? On building playgrounds?”

A million dollars or not, Arshavin must have been having his doubts when, literally two days after his debut in a 2-1 defeat, his manager threw in the towel and resigned.

And it wasn’t until his fifth match that the attacker opened his account with Kairat.

By May 2016, however, both Arshavin and his new team began to find their groove, going on a goal-mad run that saw them go 16 games unbeaten and qualify for the league’s championship playoffs.

Even the MP Muhtar Tinkeyev, chief Arshavin sceptic, would have been purring on 24 July when the Russian scored an absurd solo goal finished with a dink over the goalkeeper.

Was he doing much tracking back? Of course not, but given his stature in the game and his being now 35 years old, he finally had some robust excuses not to. And the fans loved it. Although Kairat finished second behind FC Astana, Arshavin’s team racked up 75 goals (eight of them Arshavin’s) in just 32 games.

The Russian’s return to form had journalists eating their words — and more. A local football blogger named Peter Volikova had promised to shave his head if Arshavin scored more than seven goals for Kairat, so certain was he of the ex-Arsenal man’s decline.

In the end, Arshavin himself did the honours.

Nonsensical PR move or not, the sight of Arshavin behaving like a six-year-old was a comforting sight following his Arsenal exile and frustrating spell back in Russia.

He was named Kazakhstan’s Player of the Year for 2016 and agreed to stay another year.

Alive and well and living in Almaty

Unfortunately, such achievements weren’t causing many European football fans to tune in to the Kazakhstan Premier League.

In a 2016 interview with Arshavin, a UEFA correspondent used the rather alarming headline “Arshavin alive and well and living in Almaty”, suggesting a man who had attempted a coup against the Putin regime rather than a footballer scoring delicate chips for $30k a week.

In that interview, Arshavin’s comments were typically understated.

“I started out thinking it was always very hot here; now I know it’s not the case,” he said. “I suppose I’ve played okay here. I didn’t do anything extraordinary. After six months without training I played quite a lot of games, and that was good enough for me. But we didn’t win anything.”

Arshavin’s Kairat would repeat their wild goalscoring exploits the following season, again plundering exactly 75 goals while missing out on the 2017 league title by a single point.

But they also won something, claiming the Kazakhstan Cup for Arshavin’s first piece of silverware in the country.

In May 2017, the Russian wore the captain’s armband for two matches, scoring in the first, providing two assists in the second and winning both.

And the sheer fun of playing for Kairat was enough to make Arshavin stay for a third season.

During Arshavin’s time in Kazakhstan, he was frequently in the news for the wrong reasons, usually because of his marriage.

A series of alleged infidelities became public, one of which culminated in his wife, Alisa Arshavina, threatening to chop off the finger of Arshavin’s alleged mistress.

Due to the serious nature of the threat, Kazakh authorities brought criminal charges against Alisa.

“If Alisa is convicted, then I will stop playing,” warned Arshavin. “This is like cutting off my own hands. I regret it, honestly. Please, don’t leave me without football. I simply want to do my job and make money.”

Despite the scandal, and despite turning 37, Arshavin continued to score at an impressive rate, registering nine league goals in the 2018 season — his best tally in the country.

He even ticked off a bucket list item in the 621st of his 623 career appearances — by getting his first ever straight red card in club football, inexplicably kicking Brazilian midfielder Rodrigo Antonio in the face.

And although Kairat finished much further adrift of Astana in 2018 than they had in 2016 and 2017, fans and colleagues alike gave Arshavin a fitting send-off.

After his final match, the club honoured him by dressing him in a traditional Kazakh shapan and kalpak, to his evident delight.

Just over a month later, Arshavin would be riding out of a St Petersburg strip club on a horse. A few months later he would be divorced. But his three-year swan song in Kazakhstan — the 31 goals, the 34 assists, the ritual shaving of naysayers — was an unqualified success.