The last goodbye: When Forlan won the Hong Kong Premier League at 38 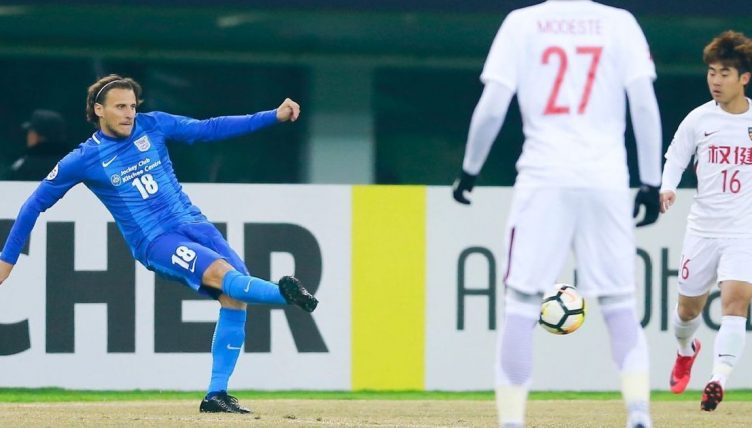 Lots of footballers end their careers either with a homecoming or a journey of self-discovery in a far-flung land.

Few end their careers with a six-year mishmash of the two. But then again, Uruguayan forward Diego Forlan was no run-of-the-mill player.

After leaving Inter, his last ‘big’ club, Forlan won the Rio Grande do Sul state championship in Brazil aged 34, finishing top scorer. He followed that up with two years in Japan, then at 37 enjoyed a title-winning season in his home country with Penarol.

That being a perfect way to wrap up his career, the Uruguayan naturally decided to pack his bags and move to Mumbai, where he very nearly won the Indian Super League — only to lose to Helder Postiga’s Atletico de Kolkata in a crunch playoff match.

Finally, on 4 January 2018, more than a year after leaving Mumbai, 38-year-old Forlan made his strangest career move yet: signing for Kitchee Sports Club in the Hong Kong Premier League.

It would be his final adventure as a player, and it certainly had its moments.

Given that Penarol were interested in signing Forlan for a third time in late 2017, it seems doubly strange that the striker — a Copa America winner and World Cup Golden Boot recipient — would instead choose Hong Kong.

But choose Hong Kong he did, earning around £13,000 per week to play for a side that were, at the time of his signing, topping the league by three points.

Part of Kitchee’s motivation for spending big(ish) on a marquee player was their participation in the AFC Champions League group stages for the first time ever. The minnows would be competing against big teams from China, Japan and Korea.

The question was whether Forlan, now 38 and without a club for 13 months, would be able to offer much against legitimately excellent (and younger) opponents like Axel Witsel and Alexandre Pato.

Forlan, for his part, was confident. “I kept training the whole year,” he said. “About the physical [side], it’s not a problem.” He even claimed he could keep playing for a few more years.

Still, the Kitchee management decided to ease the veteran into the side. His debut, a 2-2 draw against mid-table Southern District, was a two-minute cameo for the benefit of photographers as much as the team.

From that point on, however, the Hong Kong Premier League was target practice for Forlan and his teammates.

He came from Uruguay, he made Kashiwa Reysol cry

In his first start for Kitchee, Forlan played just over half of an 8-1 win over Eastern Sports Club, getting an assist.

But his second start was nothing short of spectacular.

In the 38th minute of a home match against Hong Kong Rangers, Forlan curled in a spectacular 35-yard free-kick, opening the floodgates for what would become a 7-0 win. Forlan also scored the fourth goal, a low drive from the edge of the box.

That is some goal from Diego Forlan to open his Kitchee account pic.twitter.com/H9eOHkm6sU

If there was a bittersweet element to that magical goal, however, it was that fewer than 1,500 supporters witnessed it live. Despite Forlan’s presence, Kitchee’s stadium was only a quarter full.

In the next match, Forlan scored a hat-trick, including two more direct free-kicks. He might not have had much pace, but it simply didn’t matter when he could dispatch dead balls like this.

But the Hong Kong Premier League wasn’t why Kitchee had signed Forlan. The superstar was always going to dominate local opposition; his task was to stand up to giants from around the continent.

With this task, he had less success. Kitchee lost the first three games of their Champions League group, the worst of which was a 0-6 drubbing at home to Korea’s Jeonbuk Hyundai Motors.

Embarrassingly, that ‘home’ was Hong Kong’s gigantic national stadium; Kitchee had moved the game to a larger ground specifically for the occasion.

The continental adventure did have one great moment though. In their fourth match of the difficult group, Kitchee battled to an unlikely 1-0 win over Kashiwa Reysol of Japan, with Forlan assisting the winner two minutes into stoppage time.

It was the first ever victory for a Hong Kong club in the AFC Champions League.

Whether Forlan’s final fling was a success — beyond that majestic free-kick — is a matter of debate.

He picked up a league winners’ medal and showed his quality with some fine goals.

But he missed out on the opportunity to win a domestic treble: had he stayed just a month longer, he could have won both of Hong Kong’s knockout tournaments, the FA Cup and the Sapling Cup, which would have added a little more colour to his legacy.

And although Forlan’s arrival raised the profile of Kitchee and football in Hong Kong, it might not have done as much as the club hoped.

For instance, Kitchee somewhat embarrassed themselves by playing their first two Champions League home fixtures at the 40,000-seater Hong Kong Stadium, anticipating droves of supporters flocking to see the Uruguayan.

But attendances peaked at 13,500, with just over 7,500 watching Kitchee’s historic win over Kashiwa Reysol — barely above the capacity of their usual 6,000-seater home ground.

Still, the club measured the impact of their superstar by other metrics and publicly expressed satisfaction with the transfer.

“I don’t think many people in the region would have heard about Kitchee before but thanks to Forlan, this has been changed,” said manager Chu Chi Kwong.

“We are the Hong Kong champions but not too many people cared until we brought him in. There has been a lot more coverage on Forlan and Kitchee when we play overseas, and now people are getting to know who we are.”

Ultimately, only Forlan can say whether this was a satisfactory ending to a magnificent career. Given that he trained alone for a further year before announcing his retirement, one suspects he wanted a little more.

Still, it was worth moving halfway around the world just for that free-kick.