The last goodbye: When Dirk Kuyt banged them in for Feyenoord at 35 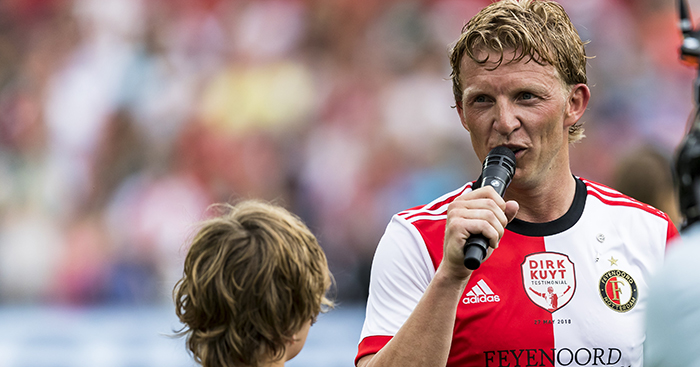 Dirk Kuyt was a hardworking if unspectacular footballer, but he finally stole the limelight during his last season at Feyenoord.

It’s easy to forget that when Dirk Kuyt arrived in Liverpool, he had been the top scorer in the Dutch Eredivisie just a year before.

The forward scored a whopping 29 times in the 2004–05 campaign, making Feyenoord the most lethal attacking side in the league.

And Liverpool, for their part, expected those kind of returns when they spent £10million on the Dutchman.

“His movement is good, his finishing is fantastic, and I know he will score a lot of goals for us,” said an enthusiastic Rafael Benitez.

The new signing was equally bullish: “I know I can score goals and make goals and I expect to score a lot of goals in England.”

What Liverpool got instead was something quite different. An incredibly useful and popular footballer, for sure, but not the dynamic poacher described in the advert.

Benitez eventually moved Kuyt to the right wing, and the blonde Dutchman huffed, puffed and bundled his way into the hearts of the Kop faithful.

He left England with a passable one-in-four strike rate but an immense reputation.

So when a 35-year-old Kuyt returned to Feyenoord in 2015, a whole nine years after abandoning his goalscoring pursuits to become an unselfish wide-man workhorse, the Rotterdam club probably weren’t expecting buckets of goals.

Nor would they have expected their biggest domestic success since the days of Jon Dahl Tomasson and Julio Cruz.

When new Feyenoord manager Giovanni van Bronckhorst signed Kuyt in the summer of 2015, the club had just finished fourth in the Eredivisie.

Their leading scorer the season prior had been journeyman Colin Kazim-Richards, who had managed just 11 league goals.

The club needed something more, and free agent Kuyt answered the call. “I’m coming home after the summer and I can’t wait to play again in De Kuip,” he said.

After Van Brockhorst made him captain, Kuyt shook things up from the very first match.

Playing in his now familiar right-wing position, the veteran scored a debut goal, a penalty, for 10-man Feyenoord against FC Utrecht. He then scored two more penalties in his next two games.

That triplet was a great start for the returning hero, but things would get even more impressive two months later.

Gone was the utility man who occasionally played at wing-back for Louis van Gaal’s Netherlands side, back was the youthful 20-goals-a-season man who first became famous in Rotterdam.

And only one of the six goals was a penalty.

Feyenoord’s exciting season would eventually suffer thanks to a difficult winter when the club suffered seven successive defeats in which Kuyt scored no goals.

A late-season rally could only return the club to third, but Kuyt ended the season with 19 league goals: the most of any Feyenoord player, the fourth highest in the division and the player’s highest personal league tally since 2005–06.

Feyenoord had been inconsistent over the 2015–16 campaign, but Kuyt and Van Bronckhorst had both shown that their glory days were not necessarily behind them.

Danish forward Nicolai Jorgensen came in from FC Copenhagen, while midfielder Jens Toornstra, whose reintroduction to the first team had helped Feyenoord get back to winning ways at the end of the previous season, was given the right-wing berth for his own.

What, then, of captain Kuyt?

In June 2016 it was reported that the wide forward had been victim of a diamond scam organised by a hotel butler. Dutch paper De Telegraaf said that Kuyt had lost €200,000 in the swindle.

Was it a bad omen?

As it happened, the start of the 2016–17 did go rather differently for the Dutchman — though not in a bad way.

For the opening game of the Eredivisie season, Van Bronckhorst deployed Kuyt in one of the only positions you couldn’t imagine him playing: central attacking midfield.

From this new No.10 position, Kuyt helped the ‘Club of the People’ to victory in their first nine matches, scoring a few times along the way.

And despite a few setbacks, Feyenoord never looked back.

September came and went, and the Rotterdam club remained top of the table. Christmas came, and still they held on. They even maintained their position over the winter, exorcising the demons of the season before.

Finally, when the penultimate game of the season came around, Feyenoord got the chance to make history: win their game against Excelsior — another Rotterdam club — and they would win the league for the first time since 1999.

The defeat at Excelsior set up a nail-biting final day.

Feyenoord went into the weekend just one point ahead of Ajax, so anything less than a win against Heracles meant the Amsterdam giants could snatch the title.

Kuyt, for his part, had not scored since early April. In fact, he had spent the last three matches on the bench.

For the title decider, however, Van Brockhorst returned his captain to the starting XI. Big games require big players.

His faith was rewarded inside the first minute.

With the De Kuip air thick with the smoke of flares, and with banners raining down onto the pitch, Kuyt lashed home from a tight angle after 38 seconds, sending the crowd into an even greater frenzy.

Eleven minutes later he doubled the lead, throwing his 36-year-old body at a deep cross to head home.

The score stayed at 2-0 until the 83rd minute, when Jorgensen was brought down in the box by a Heracles defender.

After a decade of selflessly running down the wing, harrying defenders and covering every blade of grass on the pitch, Kuyt was finally given the chance to steal the spotlight.

Dirk Kuyt, in what would be his last ever professional match, had the chance to complete a title-winning, history-making hat-trick.

And like the elegant poacher he turned out not to be, the Dutchman gently placed the ball into the bottom-right corner.

“I knew when I came back two years ago that we could win the championship and everyone laughed at me when I said so,” Kuyt said after the match.

Feyenoord lifted the trophy, and their talisman, vindicated, waltzed out of football in the classiest way possible.