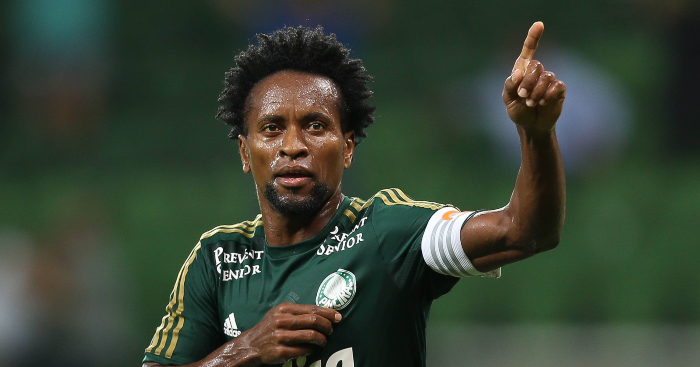 After narrowly missing out on a league title in 1996, Ze Roberto came back to his home of Sao Paulo in 2014 with unfinished business.

Despite retiring in 2017, Brazilian legend Ze Roberto has kept himself in the limelight of late, largely by being incredibly fit.

The former Bayern star, now 46, has become a popular Instagram figure, posting pictures and videos of himself in the gym and showing off his toned physique. He’s like Joe Wicks, if Joe Wicks had won four Bundesliga titles.

The 84-cap hero also made tabloid headlines over the summer after suggesting, not unreasonably, that he was in better shape than Cristiano Ronaldo, who is 11 years his junior.

“Today I would say that I have a better physique,” Ze Roberto told Argentine broadcaster TyC Sports.

But there are reasons why people are interested in Ze Roberto’s personal fitness secrets. Reasons beyond a conspicuous six-pack and biceps.

People want to know how Ze Roberto played football at the highest level until the age of 43.

At 31, the Brazilian earned a place in the 2006 World Cup team of the tournament. At 33, he won a domestic double with Bayern in Germany. And then over 10 more years of top-tier football he squeezed in another three trophies.

And it was toward the very end of his career, at the age of 42, that he won his first ever Brazilian national championship — 20 years after narrowly missing out on one.

Ze Roberto started his professional career in 1994 at Sao Paulo side Portuguesa, where he burst onto the scene as a talented left-back — a position he would occupy on and off over the rest of his career.

By 1995, he was making his international debut, coming on as a substitute to replace Roberto Carlos in a friendly against Uruguay. But it wasn’t until the following year that the youngster’s career really got off the ground.

Despite Portuguesa’s modest stature, the club went on a good run in the Campeonato Brasileiro, Brazil’s top national league, and qualified for the play-off stage by a single point.

And although they were the lowest-ranked of the eight qualifiers, Ze Roberto’s team made it to the final versus Gremio, managed at the time by future Brazil boss Luiz Felipe Scolari.

The two sides drew 2-2 over two legs. That meant, boringly, that Gremio triumphed, having scored more points during the regular season.

It wasn’t doom and gloom though for Ze Roberto, who was named best left-back of the season and promptly secured a €9million move to Real Madrid.

He spent the best part of the next 15 years in Europe, becoming one of the best Brazilians to play in the German Bundesliga over spells with Bayer Leverkusen, Bayern and Hamburg, but he would eventually return to Brazil in some style.

Out of context, it doesn’t sound especially flattering. ‘Vovo Garoto’, meaning something like ‘Grandpa Boy’, isn’t exactly ‘El Fenomeno’. For Ze Roberto, however, the nickname given to him by his compatriots was as respectful as it was apt.

Upon his permanent return to Brazil with Gremio in 2012, the 37-year-old had won an array of major honours at both club and international level, but he didn’t seem to be feeling the effects of age despite years of hard-fought competition.

Whether selected on the wing, at full-back or in central midfield, he regularly played entire games without being humbled by younger opponents.

After three seasons at Gremio, he joined Palmeiras in late 2014, returning to his home of Sao Paulo after 18 years away. As swan songs go, it could hardly have gone better.

Ze Roberto, by now 40, immediately received the captain’s armband and proved an inspiration in the dressing room before his first match, a 3-1 win over Audax in the Sao Paulo state championship.

“We were late [onto the pitch] because Ze Roberto was making a speech,” said Palmeiras boss Oswaldo de Oliveira. “I had goosebumps the whole game when I saw the reflection of that on the field. He was fundamental.”

During Ze Roberto’s first season at Palmeiras, the club reached two finals, first the Sao Paulo state championship in May, then the Copa do Brasil — equivalent to the FA Cup — in December.

They faced Santos in both contests, and both went to penalties. They lost the state championship final, in which Ze Roberto didn’t take a penalty, but won the Copa do Brasil when he stepped up first.

After such a long and successful career, the veteran Ze Roberto presumably wasn’t losing much sleep over Portuguesa’s second-place finish in the 1996 Brasileiro all those years ago.

But there was something redemptive about the Brazilian eventually winning the title exactly 20 years after that near miss.

During the 2016 season, Palmeiras stepped things up a gear and built on their form of the season prior. They even went on a 15-match unbeaten run, during which Ze Roberto got his only goal of the campaign: a cheeky chip after a smooth one-two.

Buoyed by the experience of Ze Roberto and the goalscoring talents of a 19-year-old Gabriel Jesus, the club ultimately won the league by nine points. They hadn’t won it since 1994 and had even been relegated to the second division in 2012.

“We’re going down in history,” said Ze Roberto. “This is the start of a new era.”

The player himself was also going down in history. At 42, Ze Roberto had become the oldest player — outfield or otherwise — to win the competition.

He stuck around a year longer, eventually retiring at the age of 43 and getting himself a farewell match at his old club Portuguesa.

The crowd, chanting “stay, Ze Roberto!” presumably thought he could play on forever. Frankly, he probably could have.

The last goodbye: When a 33-year-old Ronaldinho conquered South America