For a striker who prided himself on his timing, Darren Bent’s arrival at Tottenham in the summer of 2007 couldn’t have come at a more inopportune moment.

Spurs boasted one of the best front-lines in the Premier League at the time with the quartet of Robbie Keane, Dimitar Berbatov, Jermain Defoe and Mido standing between the £16.5million Charlton signing and the first team.

Bent was determined to make the step up, though, turning down an approach from West Ham and his former Addicks manager Alan Curbishley for a move he felt would further his international career.

“Tottenham have a lot of young English players and it’s a young squad, it’s a squad going forward and that’s the direction I wanted to take,” Bent declared upon the move.

“It’s exciting times for me and the club, hopefully I’ll show what I can do at Tottenham and we’ll go on to win things.”

He couldn’t have known it at the time, but Bent was about to endure what he would later describe as “the worst two years of my career”. 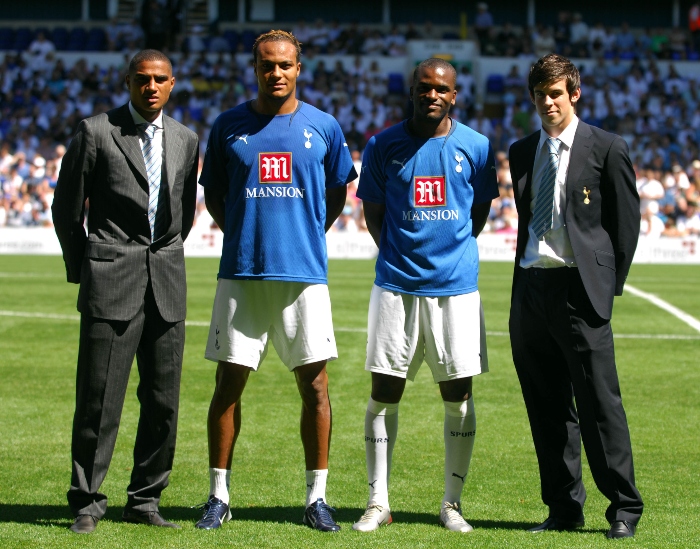 Though Bent’s arrival soon saw Mido depart, competition remained fierce going into the 2007-08 season. With Keane and Berbatov striking up an effective partnership, Bent was effectively competing with Defoe to make an impact from the bench, which would be no easy feat.

While the ex-Charlton man had scored 15 goals the previous year, Defoe was no slouch, netting 18 times over the same season. Yet Spurs manager Martin Jol clearly saw Bent as the better striker and one who, unlike Defoe, could do more than just apply a finishing touch.

Speaking at Bent’s official unveiling, the Dutchman delighted in listing his many talents.

“Darren’s strength is his stamina. Normally players will make runs three or four times in 45 minutes, he will do it all the time and if you manage to play balls behind the defence, he will be there.

“He has pace, he links play well and can see a pass – he can exploit the space and play as well.”

He had to bide his time, but Bent was handed his first start against Derby and duly delivered a goal and an assist in a 4-0 win. He followed that up with another goal in a 6-1 win over Anorthosis Famagusta in the UEFA Cup. Bent could do no wrong.

Unfortunately, Tottenham and Jol were getting very little else right, winning just one of their first nine league games. Jol was eventually sacked in shambolic style, with the Dutchman learning of his imminent departure midway through a UEFA Cup game against Getafe. In Jol’s absence, Bent’s “stamina” would be tested like never before.

Juande Ramos arrived soon after and set about changing things. A two-time Europa League winner with Sevilla, the Spaniard was determined to arrest an alarming run of form that had seen the club slump to 18th.

Bent remained behind Keane and Berbatov in the pecking order, but two goals in Ramos’ first three league games in charge put him in a more favourable position than Defoe, who the Spaniard seemed to take a disliking to from the off.

A disciplinarian coach, Bent later recalled how Tottenham became “a horrible place to be” under Ramos, who regularly lambasted players over a lack of professionalism in regards to training and nutrition, demoting several senior figures to the reserves.

By January 2008, reports suggested Ramos was readying a summer clear-out that would see Bent and Defoe sold and Berbatov retained on an improved contract.

Defoe departed for Portsmouth soon after, but Bent remained – either out of desire or necessity – to serve as back-up to Keane and Berbatov. An unused substitute in Tottenham’s League Cup final victory over Chelsea, he finished the season with nine goals from 36 appearances, mostly as a substitute.

Something needed to change. And it did.

Summer 2008 brought with it the clear-out Ramos requested – but not the one he hoped for.

Out went Keane and Berbatov to Liverpool and Manchester United, while the club opted against pursuing Ramos’ ambitious targets like Samuel Eto’o and David Villa in favour of deals for Giovani Dos Santos, Roman Pavlyuchenko and Fraizer Campbell. 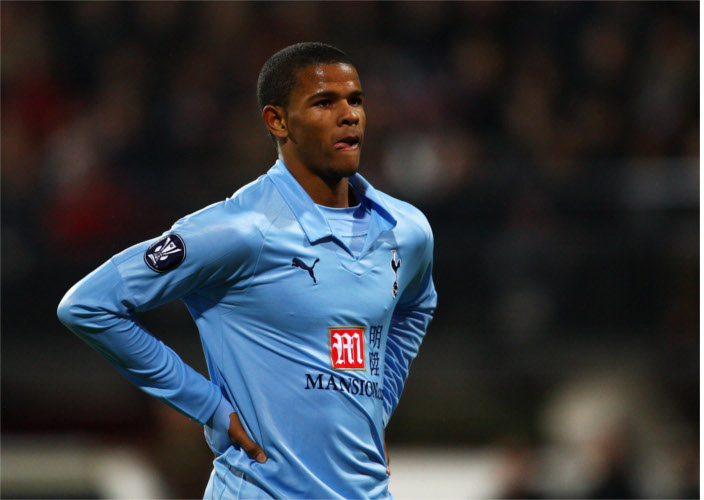 Going into the new season, Ramos felt ill-equipped to arrest a run of form that had seen Spurs win just three Premier League games since that Carling Cup triumph. He knew exactly who was to blame, too.

Bent had enjoyed the perfect pre-season, scoring 13 goals in seven games to breathe new life into his Tottenham career. It was a return that left chairman Daniel Levy in a confident mood. So confident, in fact, that, according to Ramos, he sanctioned the sales of Keane and Berbatov off the back of it.

As Ramos later recalled: “We won every game and he [Bent] scores 11 or 12 goals and so the chairman [Levy] thinks, ‘This guy Berbatov out, this guy Robbie Keane out!'”

Though Bent made a solid start to the new season, with two goals in Tottenham’s opening five games, Spurs picked up a paltry return of just two points from that run.

A subsequent run of three consecutive defeats that left Tottenham bottom after their worst ever start to a league season soon forced the chairman to take action.

Out went Ramos and director of football Damien Comolli – the man who oversaw Spurs’ disastrous transfer policy – and in came Harry Redknapp, with Levy promising a return to a “more traditional style of football management”.

Redknapp made an immediate impact, guiding Tottenham to 10 points from the next 12 available as Bent scored four in four along the way. 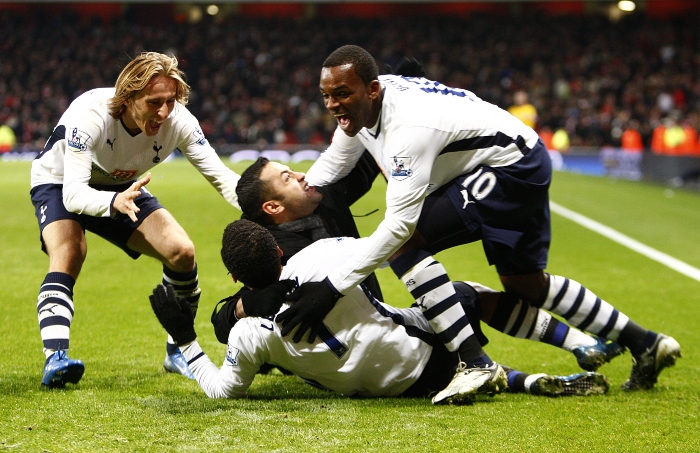 The goals continued in the League Cup and UEFA Cup, with Bent bagging the winner against Watford in the quarter-finals of the former and a hat-trick against Dinamo Zagreb in the latter.

It felt like a match made in heaven, with Redknapp only too happy to extoll the striker’s virtues.

“He has done well, he works hard at his game. It’s a terrific return,” Redknapp said after the Zagreb clash. “It’s all about confidence.”

But any confidence Bent had gained would all but disappear in the months that followed, thanks in no small part to Redknapp.

‘My missus could have scored that’

December saw the mist descend on Tottenham again, with Redknapp’s ‘new manager bounce’ ebbing away over the course of a run of five winless Premier League games. By the time Spurs entertained Portsmouth in mid-January, Tottenham were 19th in the table and Bent was in the midst of a nine-game goalless run in the league.

Redknapp had done little to boost Bent’s confidence either, having re-signed Defoe from Portsmouth earlier that month. Yet that move looked like a masterstroke when, 70 minutes into the clash against his former club, Defoe brought Tottenham level at 1-1.

By then Bent had also entered the fray and, 10 minutes later, was handed a golden opportunity to end his drought. Meeting a cross, he found himself completely unmarked in the Portsmouth box, six yards out and with the goal gaping. Somehow, he contrived to head the ball wide.

Watching from the touchline, the under-pressure Redknapp could do little to hide his frustrations, but it was his words to reporters after the game that proved most damaging.

“You will never get a better chance to win a match than that. My missus could have scored that one,” Redknapp said.

An amusing enough soundbite that could be played for laughs as much as a criticism of Bent, if Redknapp had left it there the situation may have been salvageable. But he continued.

“Bent did not only have part of the goal to aim for, but he had the entire net – and he put it wide. Unbelievable. I was just so frustrated.”

Even then, he wasn’t done.

“I was out of my seat to celebrate and [Pompey keeper] David James was waiting to pick the ball out of the net.”

‘My career stood still at Tottenham’

If the Tottenham manager was hoping for a response, he got one in the form of a transfer request from Bent’s agent.

Speculation was rife that Bent’s departure was imminent, with Newcastle rumoured to have tabled a cash plus player deal that would have seen Obafemi Martins move in the opposite direction.

The surprise return of Keane after six unhappy months at Liverpool added to the expectation Bent would leave, but such plans were put on hold after Defoe picked up a foot injury that left him sidelined until April.

Forced into a marriage of convenience, Bent went on to make 12 more appearances for Tottenham, scoring five times. Tottenham finished the season eighth, with Bent’s tally of 12 league goals making him the club’s top scorer.

Though Redknapp insisted the striker had a future at the club, his actions spoke otherwise, with the summer signing of Peter Crouch putting paid to any lingering hopes Bent may have had of forging a future under the manager who had so publicly humiliated him. 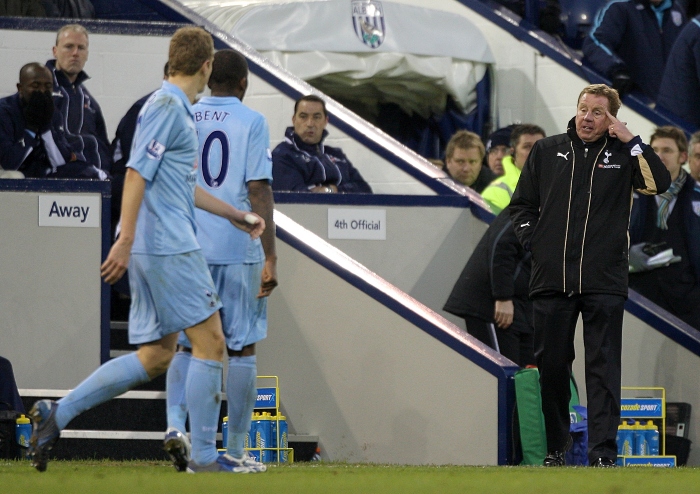 “I didn’t feel Redknapp wanted me there,” Bent later said. “It’s massive to have the support of your manager and that’s not been the case for the last two years.

“My career stood still at Tottenham. There’s a lot of politics going on there. I scored a lot of goals, but it was the hardest two years of my life.”

Bent reserved his harshest criticism of Redknapp for his reaction to that Portsmouth miss.

“No one goes out to deliberately miss,” he said. “When you miss a chance and your manager comes out and supports you rather than criticises you, it’s a big help.”

Joining Sunderland for £16.5million, Bent went on to bag 24 league goals for the Black Cats in his debut season at the club – including two in a 3-1 win over Spurs.

Now how many of those could Redknapp’s missus have scored?